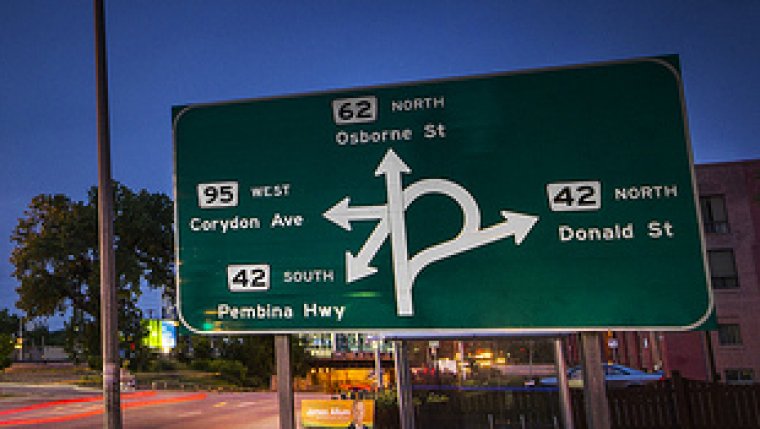 Route 90 demonstrates a long history of varying degrees of competence among city planners over the years. Speed limits vary from 80 kmh to 50 kmh but it’s driver beware because exact changes are not posted on the website. It’s Winnipeg’s longest rout at 25 km, but it actually continues for another 20 km before it reaches the south perimeter.

Starting at the north Perimeter with its rural roots in PTH #6, Route 90 emerges on the other side of the overpass as twinned Brookside Boulevard. It rolls along merrily, heading south past some open fields and gradually encountering city streets, but without interruption, until it suddenly becomes Oak Point Highway as it passes Tyndall Park on the east, which for the most part turns its back on the Route, leaving cars to roll along at 80 kmh, unhindered.

It then becomes King Edward Street, and here it begins to encounter turbulence as it slips over the railway tracks and begins to hit the higher population densities at Logan. It is still a twinned thoroughfare, however, and doesn’t really run into any problems until stabbing the major artery of Notre Dame which dumps its load of traffic on to the Route.

Route 90 slows a bit now, the lanes squeezing together, until it suddenly flings the lanes open just before Saskatchewan Avenue. Now it parts ways with the northbound traffic of what becomes Century Street, while the King Edward side flows south past Wellington, Sargent, Ellice, all armed with traffic lights.

At St. Mathews, Route 90 rejoins itself, allowing stops at Silver and then mighty Ness, picking up passengers along the way. It stays in character, splitting slightly as it swings under Portage and glides over the Assiniboine River. Then it goes due south again, slowing to 50 KMH and, now at rush hour, stopping and crawling for blocks as it collects more and more traffic at stop lights along the way: Tuxedo Blvd., Corydon, Grant, Taylor. It takes a dive under CN Rail and for some reason, it slows to a stop-and-go pace past the Cirque du Soleil tents and continuing to crawl through the next several miles, past the shopping district where, thanks to poor civic planning and tremendous growth south of McGillivray, Route 90 South reveals itself as the city’s biggest rush hour parking lot.

The traffic flow problems here owe much to the short sightedness of former city planners who failed to allow for service lanes between the shopping megaliths on either side of the route. Their errors are compounded by a lack of properly timed traffic lights. For some reason, this jamming effect is most serious at Sterling Lyon, where the lights are clearly at odds with the traffic flow.

Eventually, the route survives this turmoil and picks up speed until it comes to the new confusion Corner of Winnipeg. This is the junction of Kenaston and Bishop Grandin and again, Kenaston. Now Kenaston splits with half of it becoming Route 165 (Bishop Grandin) and counterintuitively swings itself right and over an overpass (when the natural thing to do would be to go straight under the overpass). If you follow your intuition (the signs are confusing, too because the names suddenly change), you end up continuing on Kenaston Boulevard, a wider street now and one way going south, until, at 80kmh, you are swinging out around a new area called Bridgewater Centre. Even though you are no longer on Route 90, which died at the new confusion corner, you are still on Kenaston, and if you stick to it, you will end up at the Perimeter.

Going North is another matter. If you suddenly discover at Bridgwater Centre that you are not, as you thought, continuing east to the University of Manitoba, but are in uncharted territory, you will want to reverse you direction. Don’t be surprised to find yourself going in circles as you try out round-about after round-a-bout, always finding yourself back where you started, going south. Eventually, though, you may get back on the one way lane going north (not that it is called Kenaston north or anything), you may find it hard to get back to good old Route 90 thanks, once again to the new Confusion corner.

I found myself on Waverly and I still don’t know how I got there.

I don’t know who planned this interchange but they deserve a medal for constructing the most incomprehensible plan in the country.