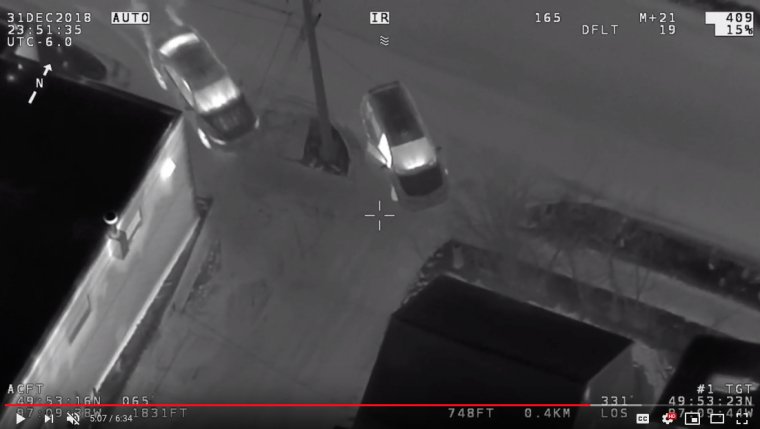 WINNIPEG - Winnipeg man, 21, wanted for a number of armed robberies tries to out run AIR-1 unsuccessfully.

On December 31, 2018, just before midnight, Police received a tip that a suspect for a number of armed robberies was leaving an establishment in the 600 block of Erin Street.

AIR-1 quickly acquired what police call "visual containment of the establishment" before officers could arrived and spotted two men leave in a taxi. The taxi was tracked to a rear lane between Agnes Street and McGee Street where officers tried a containment traffic stop.

Watch AIR-1 video as this unfolds.

One man immediately fled from the cab and was tracked by AIR1 as he ran and attempted to evade officers. However, AIR-1 was able to direct officers on the ground to his exact location near Portage Avenue and Langside Street. A search of the man later revealed he had a small amount of cocaine.

The other passenger in the cab was released without charges.

Police believe the suspect is responsible for numerous armed robberies that occurred across the City in December 2018. During many incidents, a firearm was used.

21 year-old Travis Freddie Ducharme has been charged with:

- Use of Firearm During Commission of an Indictable Offence (x5)

- Unauthorized Possession of a Firearm (x5)

He also had outstanding arrest warrants for charges that include: