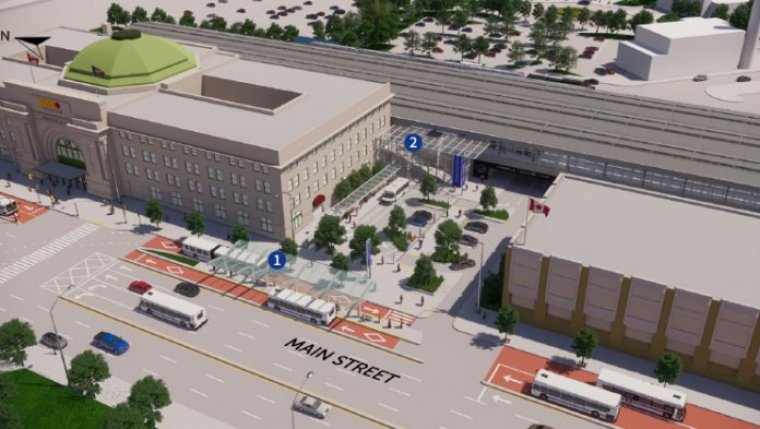 WINNIPEG - Winnipeg Transit says it plans to spend as much as $1.1 billion over the coming two decades as it expands its rapid transit network. The service’s new Master Plan outlines three lines that would be built by the year 2045, as well as the extension of its existing “Blue Line” from downtown to the U of M. Just getting rapid transit infrastructure in place for downtown service, the first phase of the new plan, would cost between $191 million and $355 million.

After downtown gets its rapid transit hub, the plan would see the network grow further over three phases in the span of up to 24 years. The plan involves the construction of a number of bridges, converting railroads to bus roads, linking the Blue Line with the St. Vital mall, and the extension of an existing line that would run from downtown along Portage Ave to the Red River Ex.

The Master Plan also envisions a “Rose Line” from linking Transcona with St. James, which would use Moray, Grant, Regent, and other existing streets; and an “Orange Line” linking West Kildonan with St. Vital, and would use Main St/St. Mary's Rd.

Another vision of Transit’s Master Plan: connecting rapid transit to Union Station, converting an elevated railroad to a bus corridor to avoid heavy Main St. traffic downtown, plus another station near the corner of Portage and Main. Another way Winnipeg Transit plans to have its busses avoid traffic is by replacing medians along Portage Ave. and Main St. with transitways.

Also on the agenda for Winnipeg Transit is modernizing the system and growing ridership. The city is looking at how electric buses can be used during their decades-long vision, and tests of both electric and hydrogen-powered buses will be evaluated by City Council in the coming months. And the most recent census found that Winnipeg is the only city in Canada in which ridership on public transit has gone down over the past 20 years. Stats Canada also found there were 60 per cent fewer transit passengers in 2020.