Why open Portage and Main? 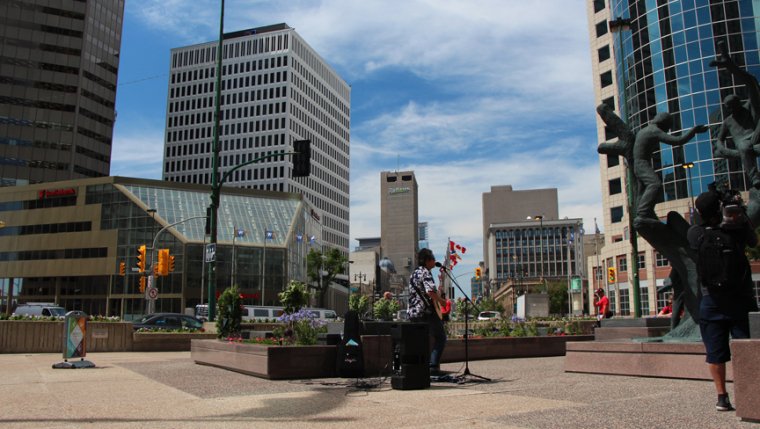 As long as the barriers remain up at Portage and Main, Winnipeg can count itself as a second-class city where fear prevails and hope festers. Those ugly gray barriers are reminiscent of another era when politicians thought they could force people to change their behaviour – it was the same kind of thinking that created the downtown dead-zone, Portage Place, which was to bring people to the city center away from the suburban malls that this kind of thinking had created in the first place. This thinking was exemplified by the “brutalist” style of architecture that was applied at the Winnipeg police station in the sixties. It was cold and bleak, windowless and alienating. It is also the kind of thinking that created in the seventies, the heavy, forbidding skywalks across our once sunny street, driving pedestrians indoors and street-side businesses into bankruptcy.

When the barriers were erected, it was to satisfy an out-of-town developer who then abandoned us, reneging on his promise to build a second tower at Graham and Main, a job that is just now being done some thirty years later. It had nothing to do with traffic demands, although that argument was later presented to support the bad decision. Back then, the streets were still teeming with people on Portage Avenue. If you could get them to all go underground, the thinking was, you’d be able to support the merchants who were being enticed to move their retail shops and cafes to the mall. It didn’t work out that way. All that the barriers and later the Portage Place Mall and its skywalks did was to drive people indoors, off the streets and eventually away from downtown completely. The only people who shop in the underground mall are those who work in the adjacent high rises and the odd tourist staying at the Fairmont Hotel, and even they are frequently disappointed to learn that nothing is open after five, anyway. As for the skywalks, a product of the same era, Winnipeg was copying Minneapolis, which is now wondering how to deal with the nightmare network they created. Nor is Minneapolis is alone. “Across this country, a debate is growing over what to do with the cozy corridors, bridges, and tunnels that have helped create urban ghost towns,” reports the Associated Press, which goes on to note that Cincinnati has dismantled half its indoor pedestrian system and Baltimore is in the process of doing the same.

The debate is raging in Des Moines, Spokane and Minneapolis, all faced with dead downtowns and hungry indoor environments that demand costly upgrade to remain habitable, while stripping pedestrians from the streets. There is another issue perhaps just as or even more important than dead streets and impoverished street-side merchants and that is the damage being dealt to the population by forcing them indoors and away from health-giving exposure to nature.

Today, we are becoming more and more aware that living an indoor life can seriously impair our wellbeing through constant exposure to chemicals and a lack of contact with the eco system that feeds our immune and internal selves. Even so, the underground route (and the skywalks) will still be there once Winnipeg’s most important intersection is open to accommodate those who can’t stand the exposure to cold winter days (although improvements must be made to help the disabled have that access, too). Removing the barriers does not force people to cross at street-side. As for the cost argument, the numbers being quoted are ridiculous and clearly designed to influence those who might naturally be inclined to support removal. And even if the barriers remain in place, they need costly upgrading and repair.

What will happen when the barriers are removed? It will take some time, but I can see a gradual return of life to all corners of our downtown streets. Some of the almost derelict but beautiful old heritage buildings on Main Street will get a new lease on life as pedestrian traffic makes new enterprise viable. There will be a renewed connection between the Exchange District and the Forks and it will open up opportunity for development along South Main, which has been gradually dying since the barriers went up. Adding this connecting element downtown will help the new True North development by re-igniting interest in coming downtown. Hopefully, this new interest will encourage the removal of the so-called “traffic calming” concrete intrusions which have been limiting street parking in the downtown, and perhaps returning some of the 20 to 30 per cent of street parking that has gradually been removed by the parking authority over the past few years. Regardless, with more people downtown and the demand for parking growing, parkade developers will be able to reinvest in their crumbling and dangerous edifices. The arguments have all been made about what little effect the change would have on commute times and how no other important city in the world has such a pedestrian traffic discouragement in place.

You now have the last word. I fervently hope you will vote to remove the barriers on Election Day and prove to the world that Winnipeg is an exciting, interesting and open-hearted city that we can all be proud to live in.