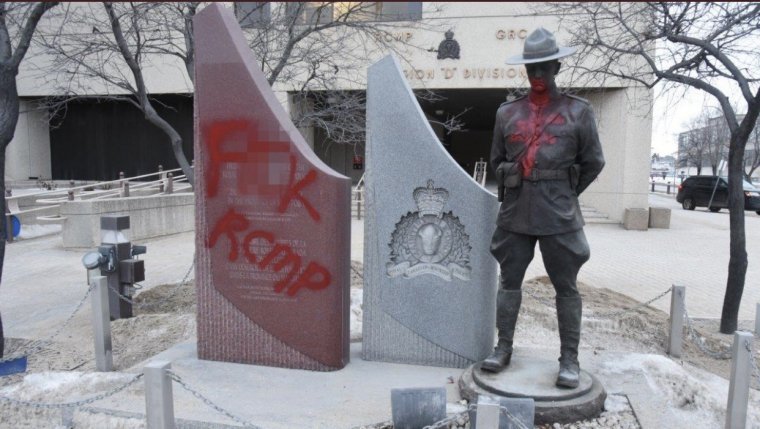 WINNIPEG - A man arrested for spray painting graffiti on the Canadian Museum for Human Rights and a memorial statue dedicated to police officers killed in the line of duty says his direct action hurt the cause that he had sought to promote.

Carter Grycko says he still believes in what the words written in red paint stood for, calling the injustice it brought attention to a big issue, but says his actions in late February last year were foolish and immature, and contributed nothing to the overall protest.

The Winnipeg protests took place a day after the OPP detained 10 people during a rail blockade during a protest there in support of B.C. hereditary chiefs who opposing a natural gas pipeline being built in the area.

Grycko, along with three others accused in the vandalism spree, went to RCMP D-Division headquarters on Portage Ave. on February 25, 2020, and spray painted the monument in front of the property, as well as the sidewalk and the building itself, using words that included "Land back" and “Shut down KKKanada." Hours later, the four went to the CMHR, and left similar messages on property there. It would later cost nearly $4,000 to remove the paint from the buildings and other areas hit by the graffiti.

Security video from the museum caught the plate number of a vehicle Grycko had been driving, which was registered to an address where he was living with his parents. The 20-year-old Winnipeg man, who is not Indigenous, has pleaded guilty to charges of mischief to property.