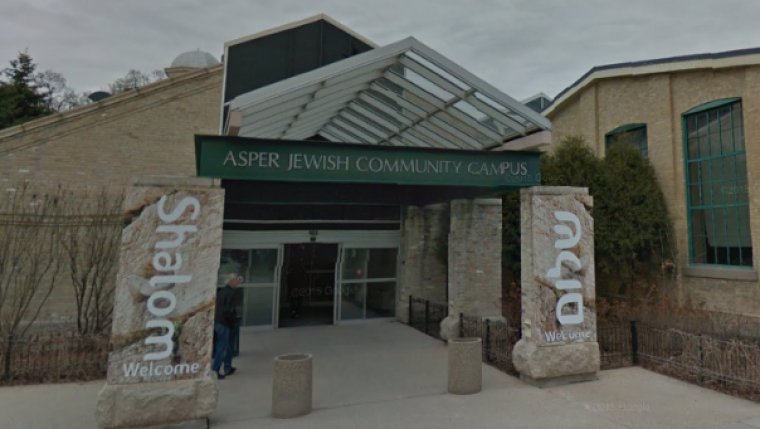 WINNIPEG - The Winnipeg police were on the site of the Asper Jewish Community Campus on Sunday morning, but the President of the Jewish Federation of Winnipeg, which helps fund the facility, has claimed a cone of silence prevents her from explaining exactly why.

Concerned parents attending the Rady Community Centre located inside the campus complex that morning were surprised, and some children upset, at seeing a squad car outside the doors and a uniformed armed officer inside the entrance. 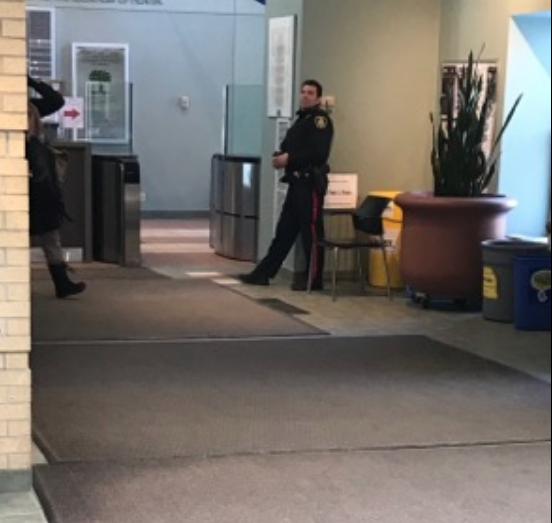 A police spokesperson had already confirmed "We were there providing Special Duty for Asper Campus" and were not responding to an incoming call for service (such as a 911 call).

When JFW head Laurel Malkin, also a Board member of the AJCC, was asked if she could shed light on whether a threat to the Tuxedo area campus was received, and who was actually footing the bill, she responded, "Hi Marty, Security issues at the Campus are confidential, and I am unable to comment". 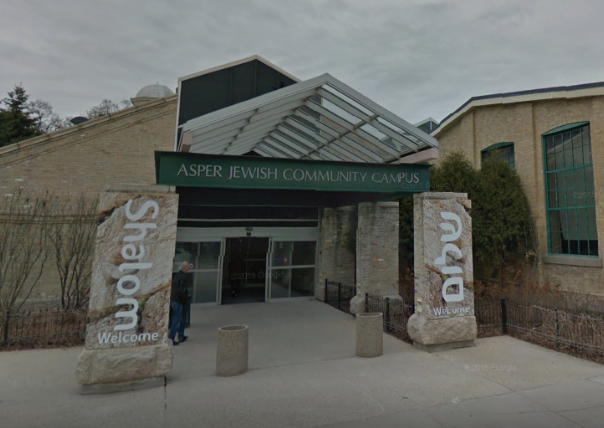 Anti-Israel podcaster Lex Rofeberg was due to appear at a learning conference on the Campus on Sunday. Five days earlier, Malkin had pulled Federation support for a Synagogue dinner featuring Rofeberg saying "The values of the speaker are not in-line with ours, as the representative body of Winnipeg's organized Jewish community."

The next day, the 3 synagogues holding the "Shabbat Across Winnipeg" dinner revoked their invitation for Rofeberg, a rabbinical student identified by the radical left-wing US group IfNotNow as one of their leaders. The Jewish Federation and synagogues said they had been unaware of Rofeberg's active role with INN, despite it being mentioned in a bio supplied by him that was used in the online ad promoting the event.

But Limmud Winnipeg, which had invited Rofeberg to make 2 presentations at their annual conference, claimed he had assured them he was not a supporter of BDS (boycotts of Israel) and they had it verified independently. Accordingly he would still deliver his 2 speeches to the conference on March 3rd.

However, as I reported, it took me 10 minutes to find proof from his personal Facebook page that Rofeberg was in fact, vocal about supporting BDS, declaring the movement was not anti-Semitic.

The President of France, among other world leaders, have stated that the anti-Zionism cloak used to legitimize BDS is a cover to conceal "the new anti-Semitism".

It was also discovered that Rofeberg had made an online post stating that "Zionist students don't need safe spaces".

The bounds of confidentiality surrounding the security issues at Asper Campus last weekend were much looser on the Winnipeg Police Service, stating the request to hire a single officer for 2 shifts - at a cost of almost $1500.00 - was made by Asper Campus Executive Director, Curtis Martin.

"They had an event where they had security concerns, concerning a speaker", according to Constable Rob Carver, Public Information Officer.

Carver quoted a rate of $115.76 an hour, for Service Duty from 7-11 PM Saturday, and from 8.30 - 5 PM on Sunday. Those hours match the use of the facility and classrooms by Limmud, for a Saturday night reception and the presentations by Rofeberg (and 40 other speakers) on Sunday.

Mr. Martin has not yet responded to multiple requests for comment, now including questions about the hiring of a police officer at a total cost of $1447.00, who will pay for it, and the reasons behind it. It's hoped he will share his knowledge in a subsequent story.

Nonetheless, the assertion by Malkin that "Security issues at the Campus are confidential" seems at odds with their practices after other recent incidents.

In March 2017, a press release signed by the Jewish Federation of Winnipeg, Asper Jewish Community Campus, Rose and Max Rady Jewish Community Centre, Gray Academy of Jewish Education and Jewish Foundation of Manitoba even divulged it was bomb threat - and that the threat was sent by email. 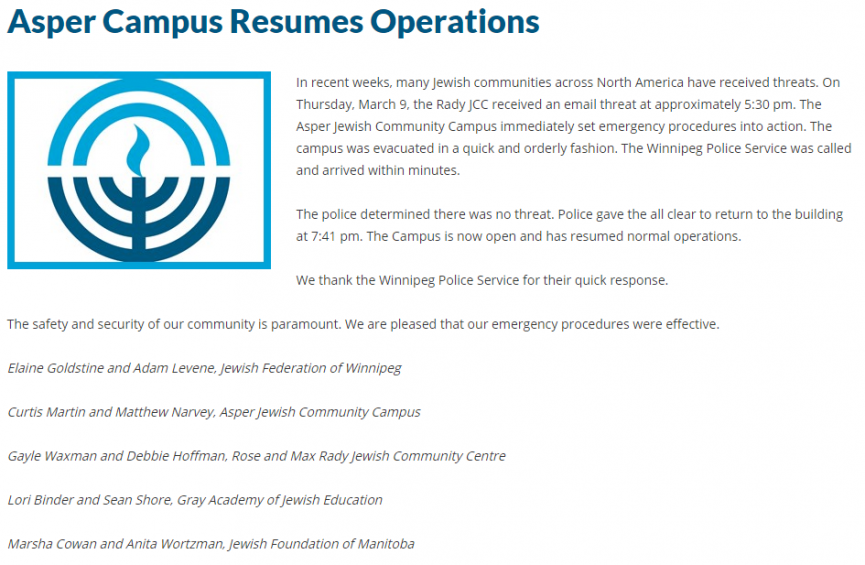 Six months later in September 2017, CTV Winnipeg reported the Gray Academy confirmed another evacuation of the Campus after police attended to an abandoned suitcase. 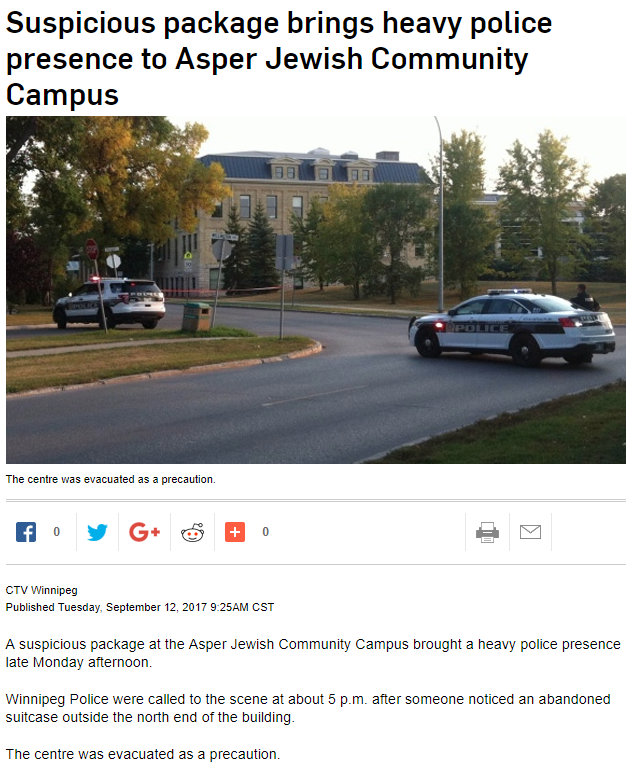 In surveying tenants of the Asper Campus office complex if they knew police had been at the building, B'Nai Brith Canada was surprised at my inquiry.

"I have no knowledge of this and wasn't informed by any organization, by the Campus or anyone," said Ron Ukashi, National Director for the B'nai Brith League for Human Rights. "I have no idea what the purpose of the police presence was. If I was walking in and saw that, I'd be asking too."

A spokesperson for Canadian Associates of Ben Gurion University was taken aback, saying "I am part of the group chat ... I was not made aware of it or of any (threat), as it pertains to the police." They confirmed no memo was received from Campus management about police being on-site or why existing security mechanisms were deemed inadequate.

A representative of a third agency housed there declined comment but added they were, also, unaware of any memo sent to tenants by the Campus explaining that police were called to the building.

The obviously unusual police presence on Sunday - such measures are usually only seen for major Asper Campus events with big crowds such as Folklorama - has raised questions if existing security measures protecting the Jewish community are adequate.

[ Marty Gold, a Jewish voice on the Canadian Prairies, has hosted radio and TV current affairs programs since 1986. As an investigative reporter and podcaster, his opinions do not necessarily reflect the views of the Manitoba Post nor its staff. Twitter @TGCTS. Please support his citizen journalism directly via PayPal at this link http://paypal.me/MartyGoldMedia]