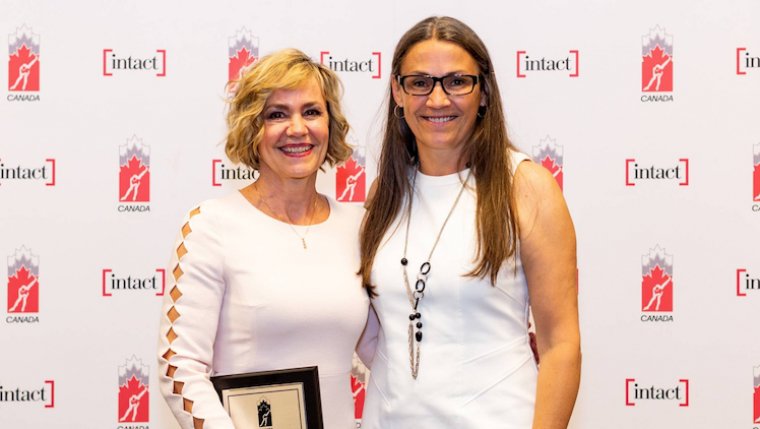 WINNIPEG – Olympian Pat Leech (née Durnin) was inducted into Speed Skating Canada’s Hall of Fame as a builder, while the Williamson Derraugh Family were presented with theGagné Family Award, which honours the family legacies that run through the Canadian speed skating community.

Leech, a native of Winnipeg, Man., was inducted into the Hall of Fame as a builder for her long-term involvement and exceptional contributions to the development of speed skating as a coach, administrator and volunteer.

When she started speed skating at the age of eleven, she didn’t know where the sport would take her. Now, decades later, she remains deeply involved in the community she loves.

“It was a wonderful evening surrounded not only by my peers, but also a new generation of skaters,” said Leech. “This awards banquet illustrates all the moving parts of a sporting community - volunteers, officials, families, skaters and business sponsors who were all honored tonight.”

Leech competed at the 1975 Canada Winter Games, bringing home a gold medal in the 1000m and silver in the 400m. She joined the Canadian national team at age 16 and went on to captured three bronze medals at the World Junior Championships level, before moving onto the senior ranks where she took part in a number of events including the 1977 Women’s World Speed Skating Championships and 1979 World Sprint Championships.

The highlight of Leech’s athletic career came when she represented Canada at the 1980 Olympics in Lake Placid, where she placed 23rd in the 3,000m.

In the late 1980s, following her retirement from skating, she helped create the Westman Speed Skating Club in Brandon, Manitoba. As the club celebrates its 30th anniversary this year, she proudly continues to serve as both Head Coach and Board Member.

In addition to her extensive work at the club level, Leech has served many roles at the provincial level. She has served as coach for Team Manitoba, at the Canada Winter Games and other national competitions, and has been a member of the province’s High Performance Committee and Disciplinary Panels.

“Pat’s influence on the development of speed skating across Manitoba is immeasurable,” said Susan Auch, Speed Skating Canada CEO, during Leech’s induction ceremony. “Her passion and love for the sport are channeled into continuous support and dedication to her athletes, her club and the provincial association.”

Meanwhile, the Williamson Derraugh Family – who have helped shape speed skating in Manitoba and across the country for over 50 years – were presented with the Gagné Family Award, which honours the family legacies that run through the Canadian speed skating community.

The members of this well-known speed skating family have impacted countless young athletes through their involvement in coaching, administrative and technical positions with the Manitoba Speed Skating Association (MSSA) and Speed Skating Canada.

The late Peter Williamson, who represented Canada at the 1968 Olympics in Grenoble, was a coach and Technical Director for both the MSSA and the former Canadian Amateur Speed Skating Association.

His wife Lori (née Toshack) was a Canadian champion in both short track and long track in the mid-1970’s and went on to play many roles within the sport, including as Executive Director of the MSSA and as a coach and volunteer at the provincial and club level across Manitoba.

Peter and Lori instilled a love for speed skating in their children – Tyler, Reece and Elizabeth – who each enjoyed their own athletic careers on both the national and international stage.

After retiring as a national team skater, Tyler became the Provincial Team Coach for Manitoba and has supported several long track skaters on their journey to the World Junior Championships in recent years. His wife Gabrielle (née Waddell) was also a national team athlete in short track and now volunteers as a coach.

Reece also maintained his connection to the sport once his days as a skater came to an end. He was hired as the Equipment Technician for Speed Skating Canada’s long tack team, a role that has allowed him to support Canada’s athletes during the past two Olympic Games.

Not to be outdone, Elizabeth took on the role as Executive Director of the MSSA in 2016, a torch passed down from her mother who held the same role in the 1980s.

“The Williamson-Derraugh family’s level of professionalism and commitment has made a tremendous impact in so many ways to the speed skating community,” said Malcolm Scott, President of the MSSA, during the awards banquet. “The number of athletes, parents and volunteers who they have positively impacted is truly remarkable and their continued dedication to the sport is inspiring to everyone around them.”

In addition to Leech and the Williamson Derraugh Family, over a dozen of speed skating’s most dedicated stakeholders – including athletes, coaches, officials, volunteers and partners – also had their contributions and achievements recognized at this year’s Awards Banquet. For a complete list of this year’s award winners, please visit www.speedskating.ca.