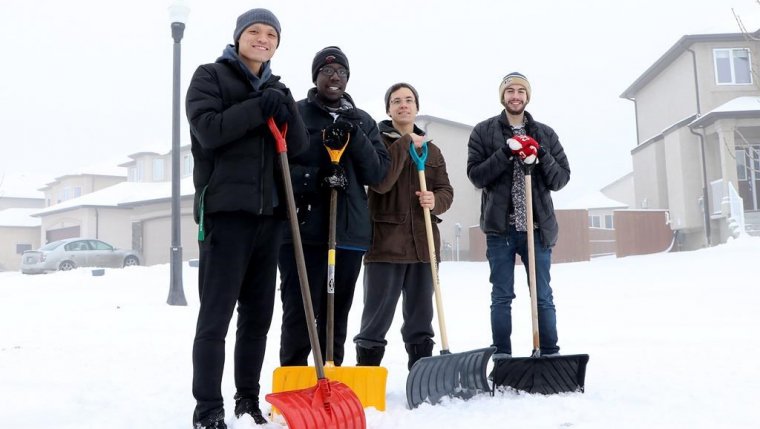 WINNIPEG — When the first big snow dump covered Winnipeg this week, the developers of a new phone app put their technology to the test.

"You can think of it as Uber for snow removal," said OnTheStep founder Buhle Mwanza, referring to the ride−hailing app.

Mwanza spent months developing the on−demand snow clearing app, which connects homeowners with shovellers — called steppers — to get their driveways and walkways cleared.

Looking around at snow−covered driveways on Thursday, the University of Manitoba computer science student said he was inspired by Winnipeg’s nickname of Winterpeg.

"I was just thinking why not make a problem all of us have to go through as innovative and fun as possible and really embrace that Winterpeg identity?"

Homeowners can download the app for free and set up a profile, including location, size of driveway and how many cars park there. When the snow starts to fall, as it always does in large quantities in Winnipeg, they can request shovelling services from their phone.

Once a price is set, a shovelling notification goes out to all the steppers in the area and one — or a team, depending on the size of the job — will get to work.

Homeowners get notifications of each aspect of the job: when the stepper arrives, when the work is done, and when the money goes through.

The app launched earlier this month, but the city had yet to see much snow. As Environment Canada put out a special weather statement for the incoming winter storm on Wednesday, Mwanza became excited to see if people would want the service and how it would all work.

He went to the first shovel request himself and the homeowner was so excited, they took photos together. But soon after, more and more requests started to come in.

OnTheStep recently partnered with Hire−A−Refugee, a local organization that connects refugees with jobs, but the demand for services was outpacing the supply of shovellers.

So Mwanza, along with the other OnTheStep team members — Tyrel Praymayer, Alex Shao and Tristen Wong — pulled out their shovels and got to work. From the first request Wednesday afternoon until around 3 a.m. Thursday, the group trudged up and down driveways with shovels.

"I feel like snow and Winnipeg is sort of like a bonding experience. We all have to deal with it," said Praymayer, OnTheStep’s marketing manager and student at the Asper School of Business at the University of Manitoba.

"Winnipeg is great inspiration for this app. It’s a beautiful way of incorporating Winnipeg into innovation."

Despite a night and morning of shovelling, team members said they are excited by the demand of the first big snowfall.

"Snow definitely has a different identity in our mindsets now," Mwanza said.