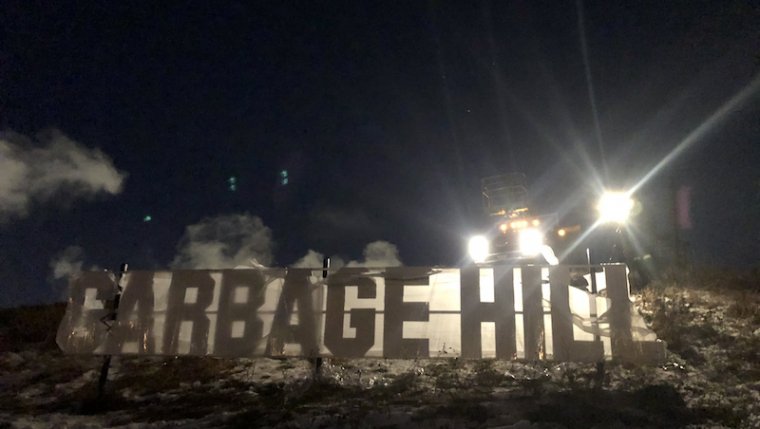 WINNIPEG — Los Angeles has its famous "Hollywood" sign but Winnipeg can now boast of having its own smaller version — only this one adorns the side of a former landfill and reads "Garbage Hill."

The permanent sign measuring one metre in height by six metres in length was unveiled by the city at Westview Park in west−central Winnipeg.

It replaces another "Garbage Hill" sign that was made, in part, from an old garage door and set up in September by a prankster whose motive appeared to be to reflect the nickname Winnipeggers had given the location over the years.

The prank caused an online stir and prompted several people to visit the site to take a selfie before the sign was removed.

A petition sprung up to bring the sign back and Mayor Brian Bowman took to Twitter to say he was behind Winnipeggers who wanted it returned.

The city says in a release that the new aluminum composite sign with white reflective letters uses a font inspired by the famous Hollywood version.

No one has ever stepped forward to take credit for the original sign.

In a tweet posted just before Thursday’s unveiling, Bowman said: "Some say Hollywood is built on trash. We’re better. Winnipeg’s "Garbage Hill" is literally built on rubbish. Long live the legend and mystery of Garbage Hill. Our majestic Hollywood mountain on the prairies."

The landfill operated from 1875 to 1948 and was used primarily to dispose of glass as well as ash from a city incinerator.

It was converted to a park in 1960 and became a popular spot for tobogganing and watching fireworks.

Music fans were known to congregate at its crest to try to watch or listen from a distance when rock concerts were held at the former Winnipeg football stadium that once stood just a few blocks away.

The "Garbage Hill" sign pales in comparison to its California cousin. Each letter in the Hollywood structure is more than 13 metres high and ranges in width from close to 9 1/2 metres to nearly 12 metres.