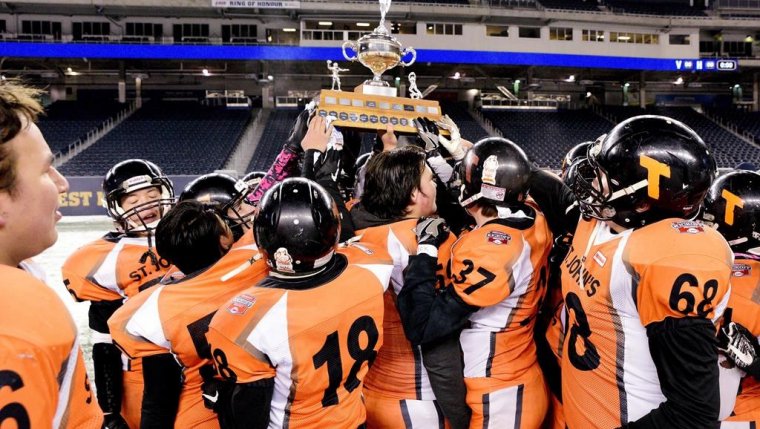 WINNIPEG — A layer of snow covered the field as the St. John’s Tigers fought off the opposition to win a high school football championship and keep a promise for a former quarterback who was murdered.

The last time the Tigers played on Investors Group Field in Winnipeg was in 2016 when Jordan Thomas was the quarterback. The team fell short in that championship game, losing 35−32 to Kildonan East Rivers.

It was Thomas’ last game.

The 18−year−old football player was stabbed to death in a schoolyard the next year as he walked home with his brother. Another teenager was convicted for the murder.

So, at the start of this season, his teammates made a promise: They would do their best to bring the championship home for Thomas.

"I constantly talk to our players how the team is a family and when you become a part of the Tiger football team you are bonded with the players for life," said head coach Grant McMillan.

It was a close game Thursday night, with the Elmwood Giants and the Tigers putting everything on the grass.

In the last few plays, the Giants had to push the field.

But the Tigers had a plan called the victory formation.

Their bright orange jerseys standing out on the snow−covered grass, a Tigers player intercepted a Giants’ pass, snapped the ball, and put a knee down to win the game 13−10.

The nail−biting win officially broke a 38−year championship drought for the team — and fulfilled their promise.

"It felt like we had a thirteenth man on the field, like (Thomas) was watching over us and he was helping us," said middle linebacker Nick Wakos, 17.

"It was really an astonishing feeling."

When Wakos joined the Tigers he said Thomas was a mentor to him and many of the other players. So, when it came time to take a photo with the championship banner, the team decided to lay down the No. 7 jersey — Thomas’ jersey — in front.

"It felt great to have that jersey with us because we knew that he was shining down on us and smiling at us while we were playing that day," Wakos said. "I feel absolutely honoured to say that we fulfilled that promise for Jordan."

The Tigers are one of the founding teams within the Winnipeg High School Football League in 1933. But, until this week, they had only picked up 10 championships — the last one in 1980.

McMillan said one of the reasons was the changing demographics of the North End neighbourhood. In recent years, many of the students didn’t grow up watching football and weren’t interested.

There were also socioeconomic factors for why the sport wasn’t attracting players. Some students couldn’t afford the equipment or travel expenses.

But McMillan said that’s not the full story of their school or team.

In his 12 years at the school, there has been a big effort to get kids involved and he’s watched it ripple through the community.

"The beautiful thing for me in this process is how the school and the community have been impacted by the success we are having," he said, adding the stands were packed with supporters and former Tigers’ players during the championship game.

Of the 28 players in Grade 9 to Grade 12 that put on the Tigers jersey for a game, MacMillan figured more than half are Indigenous. Many others are from immigrant families and other minority groups.

"We would, in my opinion, be one of the most culturally diverse teams, which is a representation of our school," he said.

The championship game was Wakos’ last as a Tiger, but he won’t be getting rid of his cleats. He still throws the ball around working with the Winnipeg Aboriginal Sport Achievement Centre and hopes to play with the St. James Rods Football Club after graduation.

But he’ll never forget what it felt like to end the infamous Tigers’ drought.

"We all described it as one of our best days ever," said Wako. "There was no day that was better than that."