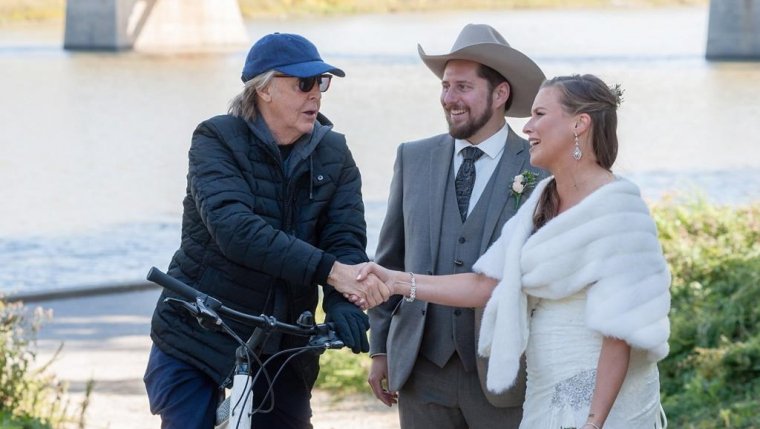 WINNIPEG — All you need is love, but having a former Beatle in your wedding pictures doesn’t hurt.

Jen Roscoe and Steve Gregg were getting their official wedding photos taken Saturday alongside the Red River in Winnipeg when one of their friends noticed a guy passing by on a bicycle.

He had a hat on. But when you’re one of the world’s most famous music artists, it’s hard to not to be recognized.

"We just heard someone say ’Congratulations,’" added Laurie Dixon, who was taking the couple’s wedding pictures.

McCartney, who had played a concert in the Manitoba capital the previous night, was on a cycling path that ended not far away. So when he turned around and came back, Roscoe and Gregg asked him to be in a couple of photos.

"He graciously said okay, and he asked if we were the ... happy couple, and we said yes," Gregg said.

"The whole thing took about 20 seconds."

Behind the lens, Dixon was firing away, knowing the moment would not last.

"We were like let’s just click as much as we can for as long as he’s here," Dixon said.

McCartney, with two bodyguards, rode off. Roscoe and Gregg were married later in the day.

Gregg said McCartney was kind to have stopped for the snapshots. But the important thing is he married the woman who he felt he had to get into his life.

"That was a really nice thing (McCartney did), but that was not even the greatest part of my day."