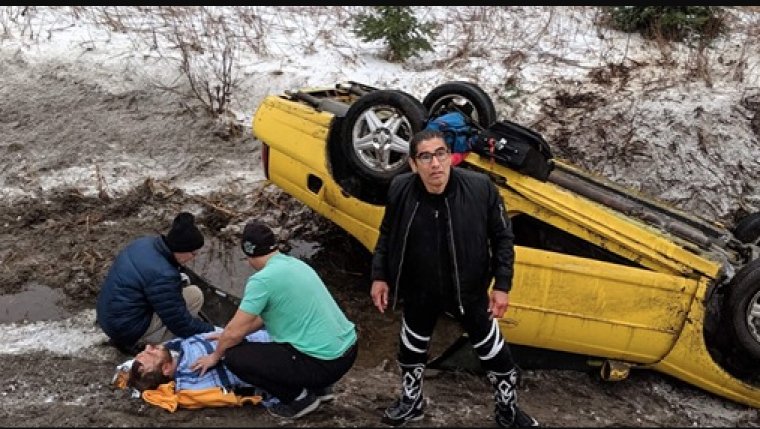 A late-season wintery highway was almost the end of the road for Winnipeg heavyweight wrestler and promoter Danny Duggan in Ontario - and for two international stars traveling in his car - with the finish line in sight for an unprecedented 38 event barnstorming tour across 5 provinces with Canadian Wrestling's Elite. The promotion, which specializes in long tours with consecutive events hitting small and big towns from Vancouver to Toronto, was almost finished producing the 10th Anniversary 'Decade of Dominance' tour.

The 32 year old Duggan, who is in his private life Danny Warren from Winnipeg, posted an online message that described navigating a slushy road under "some beyond brutal winter and wet conditions that saw many vehicles in the ditch and plenty just avoiding joining them" while heading from a tremendous show in Sudbury to the next in Kirkland Lake, Ontario early Wednesday.

"Psicosis and Robin (Lekime) luckily managed to escape with what appears to be so far only some cuts and bruises. Hopefully nothing more." Both made it to the final tour stop, the much-anticipated CWE debut in Toronto, and were slated to compete in the ring in separate bouts. Duggan however, could not make it to the Franklin Horner Community Centre venue. 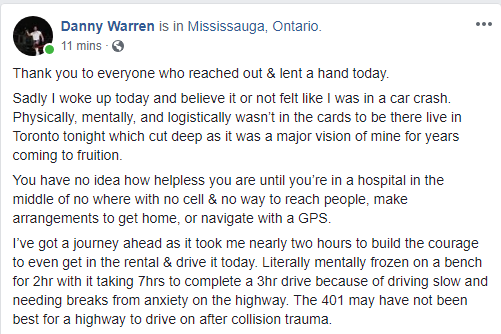 In a matter of seconds, "Hotshot Danny Duggan", around the wrestling game since his young teens and who just became a father in January, was hurtled into a life-threatening, and life-altering, experience.

"Wrestlers Are Superheros And There IS A God" he titled his Facebook message, in which he crafted a deeply moving reflection about his spouse Chelsea and newborn daughter Ilsa, and what could have happened had their fate taken a darker turn.

"Before anything, thank you Robin Lekime and thank you Psicosis. You saved my life. Literally. If I say nothing in public ever again. Thank you. Thank you forever." 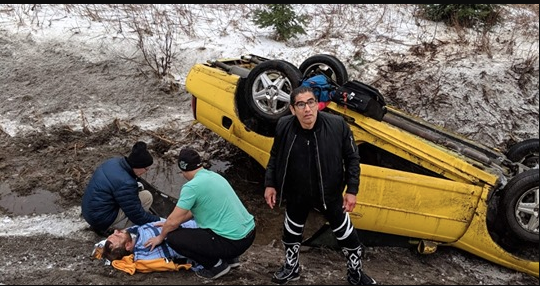 Psicosis awaits more help in front of the wrecked Monte Carlo, as Danny Warren is kept immobilized and warmed.

"We were on the road for 30 days with the tour," Chelsea told Manitoba Post "and I had decided the night before they left not to go the rest of the way," so she and the baby jumped off in Winnipeg. She explained how the drama unfolded on the home front.

"I was at my parents and away from my phone, I checked it later that night and had a missed call from Ontario, and also a message from Robin that they had been in an accident. I called the number back and it turned out to be the hospital in North Bay or something, they transferred me to Danny who then told me what happened."

"It was just a scary little bit reading the message from Robin that they had been in an accident and then hearing Danny like that in the hospital, I never heard him like that before. It was almost surreal like it didn’t seem like it was a real thing that he was telling me had happened to them, I was so relieved they were ok but the whole reality of the situation really hit me hard after he got off the phone". 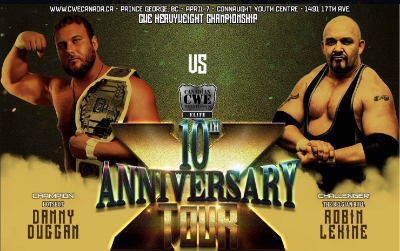 The couple were ecstatic with the birth of Ilsa in January and Danny wrote "They say having a child will change your life and it was never any more true today as her life seemed equally as a part of fighting for my own... the thought of Chelsea and the life altering struggle it would be raising Isla on her own without her dad. That is a powerful and devastating thing to think about I can only pray I never have to think about it ever again."

Chelsea described her apprehension about the risks wrestlers in Canada face by driving town to town to perform in front of fans for whom WWE events are often too far away or too expensive to attend: "It’s scary, the Ontario roads are especially scary."

"What happened is exactly my fear every time they go on the road and I always pray that God will watch over him and keep him safe and I know that God was with them there." 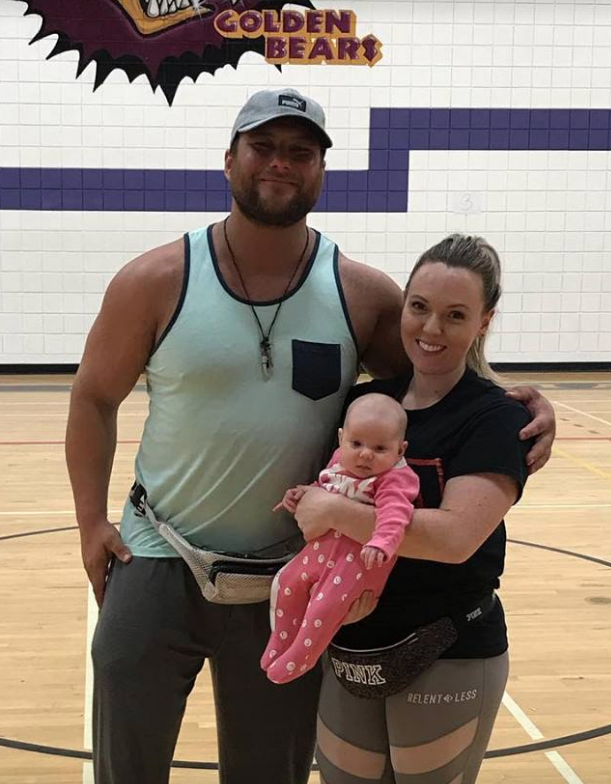 Danny and Chelsea, with baby Isla on the tour, in Virden, Manitoba on April 22

In his online message, Duggan set the scene that led to the accident:

"The highways were beyond icy and not allowing for much traction, if any.... with the need to get some loose ends tied up for the show later that night", Duggan switched spots to allow trusted lieutenant Robin "the Belgian Bull" Lekime to take the wheel. Mexican wrestling legend Psicosis, the tour's star attraction and a former WWE star, was in the back seat of the yellow Monte Carlo."

Trailing a semi-truck on the 2 lane highway doused his car "in rain and wet snow from its tires until it was long and clear in the oncoming lane to pass the truck but ... the second he crossed the median, well before (accelerating to pass the truck we) hit sheer ice".

As a result, the sports car spun in circles in the opposing lane and went over a steep ditch and rolled with Duggan "having a split second to realize we are not only upside down but fully in a body of water. Panic sets in as you are hurt, upside down, can't get your seat belt off and have no idea how to escape. Literally in what had to be less than a split second I am almost completely underwater with just my nose, mouth, and surface of my face above water trying to breathe."

When the other wrestlers scrambled to get out, the weight of the car shifted forcing the passenger side, with Duggan trapped, COMPLETELY under water.

"The fight for my life was on as I am now desperately trying to get my head above water but there is no above water in that space and I'm literally grabbing anything and anywhere trying to post my head up and survive all while still fighting with this seat belt. The same seat belt that saved my life was now turning heel and costing me it." 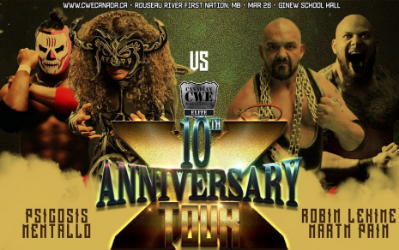 "I was suffocating ... "I am going to die. This is it". As I was continuing to fight I felt someone put pressure on the seat. I believed it to be Psicosis from the mumbles I can hear under water. This offered JUST enough room for me to catch shorts breathes for what felt like seconds as i kept struggling in and out of water ... never in my life have I felt the sheer terror of feeling completely helpless from the certainty that I was about to die. The most terrifying emotion I have ever encountered."

After running tests and blood work Duggan was released from the hospital in North Bay. A severe concussion, legs smashed, some very severe and deep lacerations, cuts, chunks of skin gouged from his scalp, ear, legs, arms, and his hands being mangled and bloody - "and a whole lot of pain throughout my back and body." - was the end result of the ordeal. He expects to fly back to his family from Toronto before the weekend. (His full statement is here ) 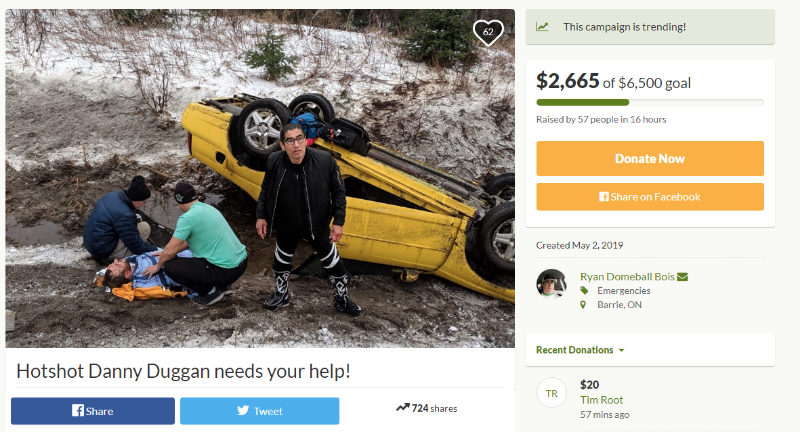 A GoFundMe was quickly established to assist with the costs being incurred; some cash and cheques from the sponsors were lost in the ditch, making the situation for Duggan and his family even more strained. https://www.gofundme.com/hotshot-danny-duggan-needs-a-new-car?fbclid=IwAR2Vk6mXzg9n0WmKhpRWuJ2ZsDnQ-flMP_62VV3Tx15-JGhS8ivUdfmjs_s

Contributions have come in from fans and industry members across the continent at a steady rate, as Duggan has amassed a substantial following from wrestling in CWE and other promotion across the country and midwest USA. 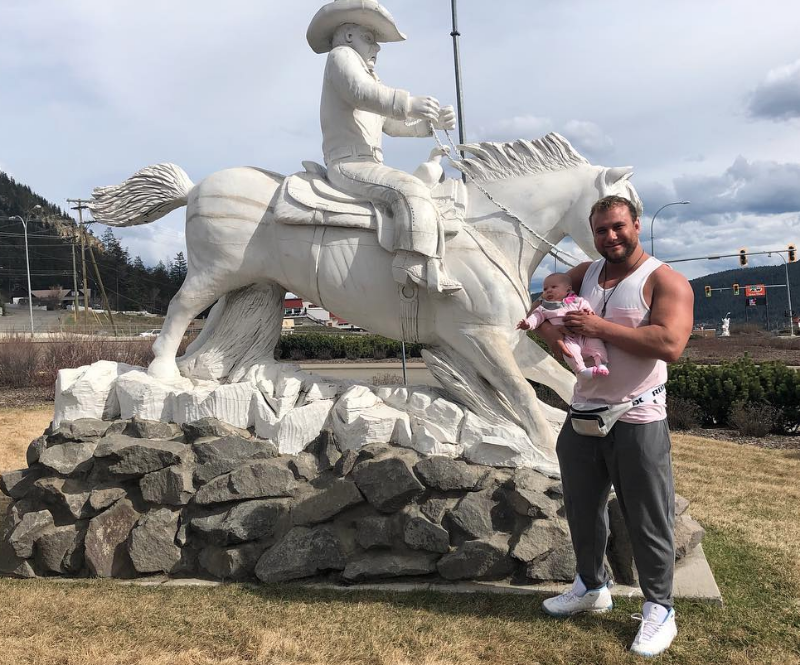 About 8 hours after the campaign was activated, Chelsea sent her own message to supporters:

"Thank you so much as well to anyone that’s donated for a new vehicle for Danny. Again your love and friendship has been truly overwhelming. Last but not in the very bit least a giant thank you to Robin and Psicosis for looking after Danny and being there to help him when he needed it most, you guys are beyond amazing and I can never thank you enough."

{ The author of this report, Marty Gold, first met aspiring wrestler Danny in 2002, and has worked especially closely with him since 2014 as an event host, wrestler, referee and filling other in-and-out of the CWE ring roles. He asks that readers please support Danny, Chelsea and Isla as they heal from this traumatic accident. Marty can be reached at martygoldlive@gmail.com }