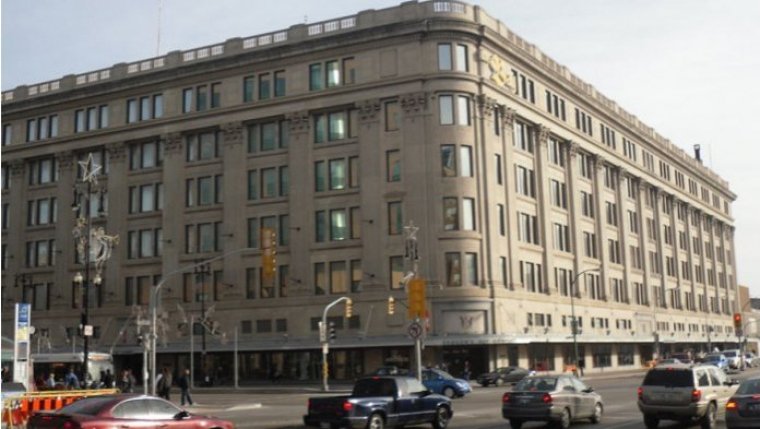 WINNIPEG - The Hudson’s Bay department store in Downtown Winnipeg, long lauded as iconic with its recent historical status designation, marked its 94th birthday this week. As was the case with the recent birthday of Queen Elizabeth II, who turned the same age on April 21, the celebration was bitter sweet: while the Queen requested to forgo the usual birthday pomp and circumstance for the first time in her reign in consideration of the ongoing pandemic, the milestone for HBC will be its last before it closes in February of the coming year.

The Hudson’s Bay Company was formed by an act of British Parliament 350 years ago, and was originally called “Adventurers of England Trading into Hudson's Bay.” Winnipeg was a central trading post for their operations. Like the Queen across the ocean, the Hudson's Bay Company’s prairie flagship building was born in 1926; and like the British Monarch, it’s seen many changes over the decades.

The Hudson’s Bay Company announced this year it would close the 94-year-old iconic department store for good early in 2021, but says it has created a new real estate division focusing on trying to increase the value of their North American property holdings, which total 40 million sq. ft.

The decision to shutter their doors in downtown Winnipeg had been expected for a long time, after many departments were closed or condensed over the years. Four floors of the building’s six were eventually left unoccupied, with the company having a hard time finding tenants to fill them. The Paddlewheel Restaurant, at the top floor, closed in January 2013. In 2010 its basement had been converted into a Zellers store, a discount department retailer, but the brand was plagued by fierce competition, and was liquidated and closed across Canada by March 2013. Retailers also faced significant losses as a result of the COVID-19 pandemic, and financial sustainability was a factor that contributed to HBC’s recent decisions to close stores in both downtown Winnipeg and Edmonton.

An appraisal in November of 2019 said the Winnipeg building was worth $0.00 considering the cost of renovation, but City Council had voted to give the building historical status just eight months prior to that assessment. That protection constrains any future tenant to preserve its historic and cultural characteristics. The company says Winnipeg remains a valuable market for the company, and was working to partner with municipal and business leaders to repurpose the 600,000 square foot building.

With HBC’s real estate division now in place, the company plans to diversify their revenue streams by modernizing the locations it currently owns like the one downtown, with plans to create mixed-use properties that would offer office, housing, retail, and entertainment space.

The Hudson’s Bay Company set up its first sales shop here in Winnipeg in 1881 at the corner of Main Street and York Avenue. Technically a British company for 300 years, Winnipeg hosted their first Canadian headquarters for four years before they moved to Toronto in 1974, and Brampton, Ontario in 1998. Now, as the Queen of the United Kingdom and the commonwealth adapts to lockdown orders from the British government on her birthday, so too is a leader in Canadian merchandising adapting to a rapidly changing retail landscape as it marks the same number of years.