Dealing With Deer in the Garden 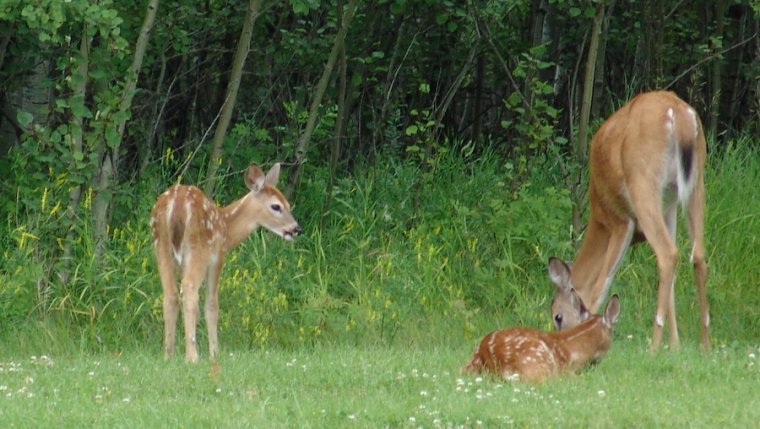 What is more beautiful and fascinating than a tawny, white-tailed deer, seen grazing along a woodland margin while her two spotted fawns graze nearby? Clearly wildlife of a higher order, they attract admiring glances from passers-by and when the magnificently antlered buck enters the picture, admiration changes to awe.

So how do you live with the deer in your area?

2. If you have high deer populations and young evergreens, you can build a tent around the trees to keep deer from feeding on them. Erect a tripod over the tree and staple burlap to it. Do not wrap the tree tightly. This can cause winter burn from desiccation.

3. Grow plants deer generally avoid (when hungry enough they will eat almost anything).

4. Deer are extremely adaptable so your best defence against them in the garden is a series of alternating strategies. They don’t like strong scents. They are wary of flashing or moving objects. They don’t like to get their feet tangled. Folks living in rural areas can use perimeter brush piles to deter them. Some people hang Irish Spring soap in their trees. Others hang bags of human hair, or fabric softener strips.

5. Home made concoctions of cayenne pepper and garlic applied to plants also work for a time. So do commercial products, but all need to be constantly reapplied or changed to be effective.

6. Coyote urine is said to be more effective than others. Motion-sensitive sprinklers can also work. One gardener I know strings fishing line, invisible to passersby, at entry points to her garden.

In highly deer populated areas, people often resort to electric barriers or build eight-foot fences to enclose their gardens and even then, the occasional deer has been known to jump over the barrier.

Deer in the wild

White-tailed deer populate the woodlands of Canada in ever increasing numbers and when their habitat it threatened, they adapt quickly to living with and near humans. That’s when the trouble begins.

Deer in the wild eat large varieties of food, including clovers and other leguminous plants as well as shoots, leaves, grasses, fruit, corn, grains and acorns. They love blueberries and fiddleheads. Because they are ruminants with four stomachs, they can handle such things as mushrooms and even rhubarb leaves that would be poisonous to us. They can also develop a real taste for the tender annuals and some perennials in our gardens in spring time. This is annoying, but it can become downright infuriating when your favourite fruit trees or evergreens are their winter targets. Deer can do severe damage larger trees and shrubs and can kill smaller ones.

In the wild, deer populations wax and wane with the severity of the seasons and the occurrence of predators. A hard winter can serve to keep numbers in check as food supplies dwindle. Feeding the deer in winter interferes with nature’s balance and can seriously damage the surrounding vegetation which affects other wildlife.

In winter, deer travel in herds with one buck to many pregnant does. In spring, herds split up. Does give birth once a year in May or June to one, two or three young, that, like baby rabbits, are protected by a lack of scent so that predators can’t detect them. The doe spends long hours looking for food.

White-tailed deer flash their tails when alarmed, and they can vocalize – grunting, snorting and making high-pitched bleating sounds. They also communicate using scent produced from glands in their heads and the lower outside and the inside “knee” of each hind leg. There are times during mating season when the scent become so strong, it can be detected by the human nose.

Given their cleverness and resourcefulness, it is hard not to admire the garden enemy even while cursing him. After all, what is more beautiful than a tawny, white-tailed deer?

Dorothy Dobbie is the owner of Manitoba Gardener magazine. Her weekly garden show is heard at 93.7 FM CJNU at 8:00 Sunday mornings. www.localgardener.net for more stories like this or to subscribe.