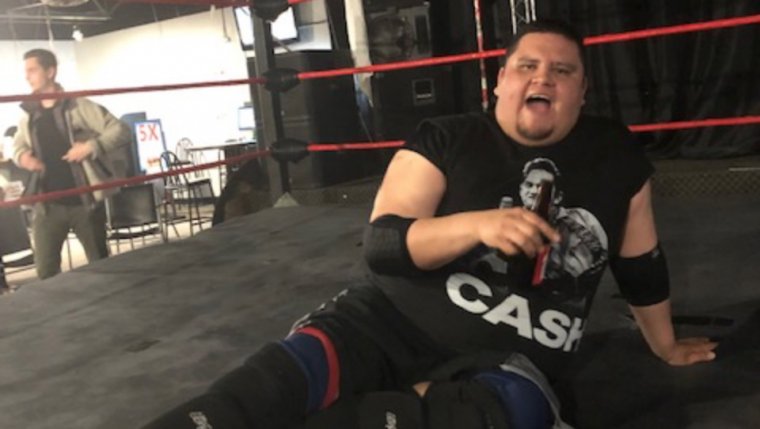 In the world of entertainment there’s improv, and then there’s when improv meets wrestling.

Canadian Wrestling’s Elite held its first event after completing the 38 Day 10th Anniversary Tour at Rookies Sports Bar on Friday night and the Lethal Lottery, drawn by the fans, dictated the line-up, match by match.

This protocol meant that wrestlers had quite literally, no notice of who they would face. Existing rivalries and storylines meant nothing in this environment where the random matchups delivered a level of improv that challenged every wrestler- including one surprised ring announcer- to mine their creativity. It’s the closest thing to a game show professional wrestling can do. 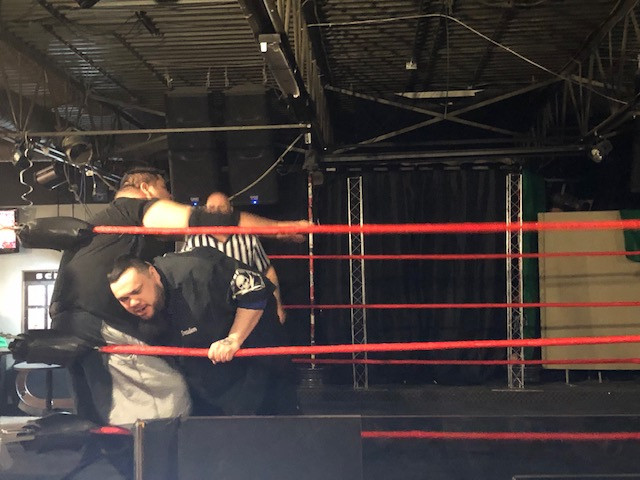 The rap artist Jon Drezden made a rare in-ring appearance and brought the fight to The Fabulous Creebird Kevy Chevy, who eked our a victory to advance to the main event tag team lottery. 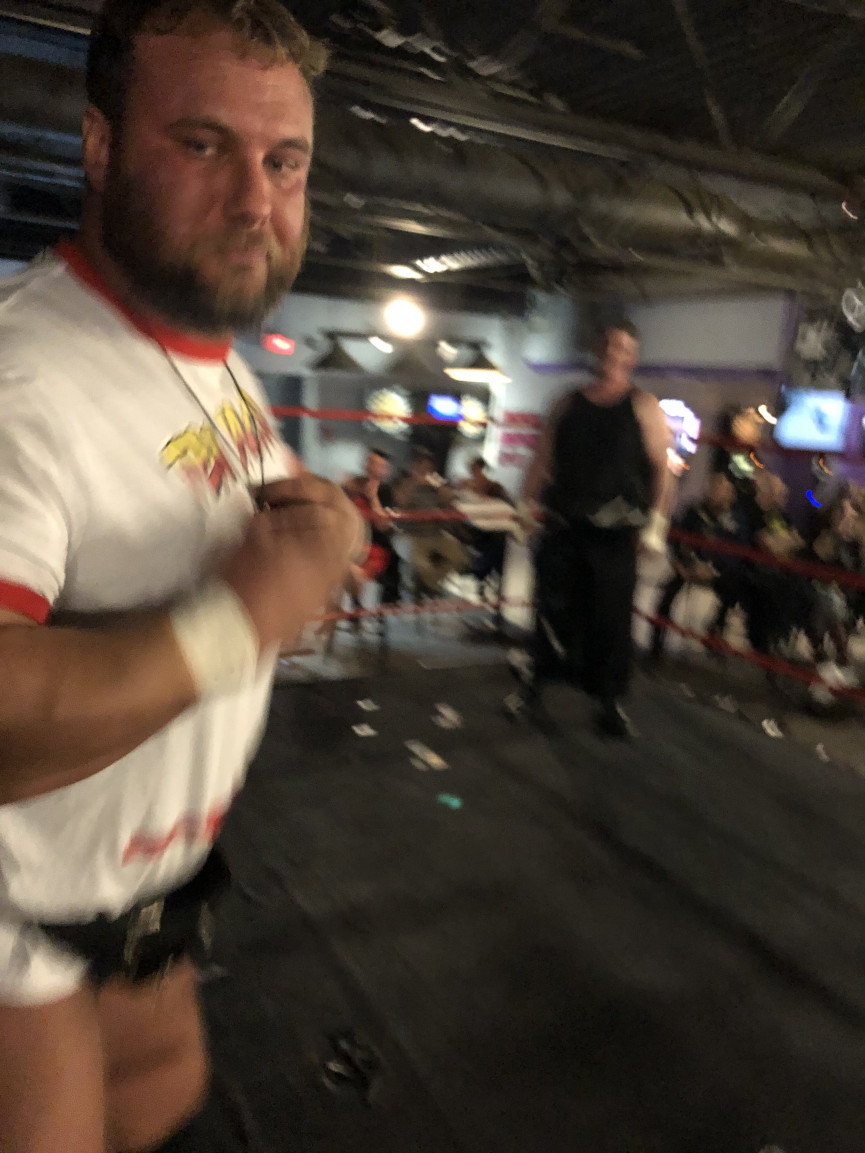 Barely 10 days after a near fatal car crash in Ontario, a determined Hotshot Danny Duggan was prepared to duke it out with perennial loser Adam Race. As Duggan handed over his ring accessories, former CWE Executive Ambassador Shane Madison came out from the locker room and implored Duggan not to further risk his health in a match against “a pasty bag of milk”. The crowd was shocked when Duggan walked out of the ring, handing a stunned Race his first career victory. 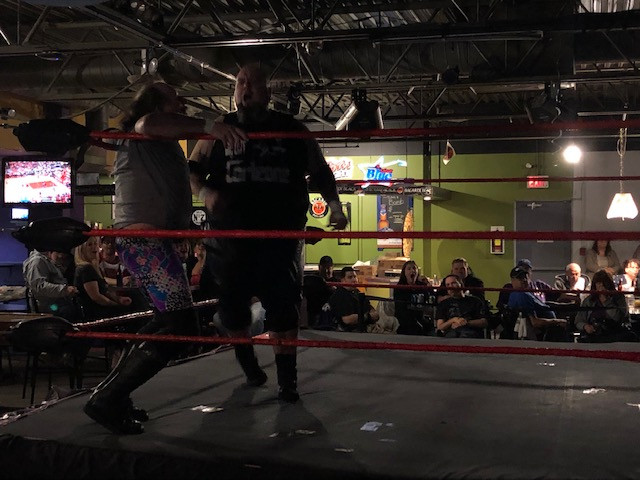 As happy as the fans were when the name of new Hardcore Champion Big Cliff Corleone was revealed, they were absolutely bonkers when 42 year veteran Wildman Firpo was drawn to face him. Corleone squashed Firpo for the pinfall before helping him to the back. 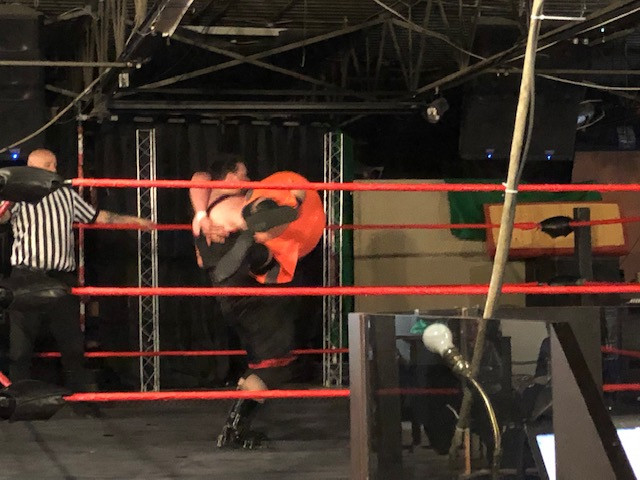 A very competitive heavyweight pairing was drawn when the hyper-popular Outlaw Adam Knight squared off with the Boston Bruiser Kevin O’Doyle. Knight got trapped in O’Doyle’s Pulverizer Slam but survived the impact to hit a lariato for the 3 count. 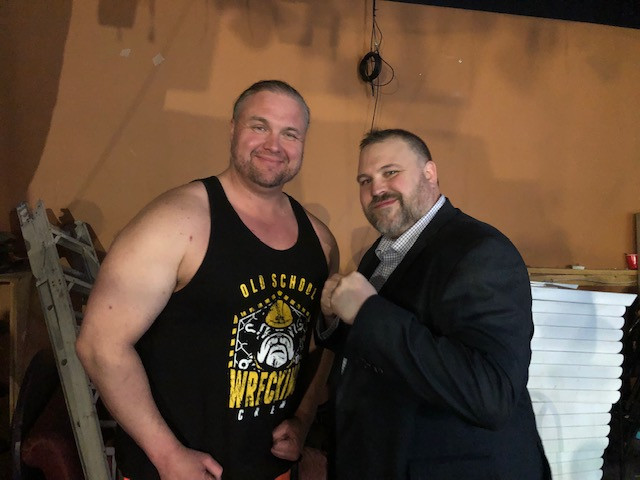 After intermission, the next name was drawn, which was the ring announcer. Who happens to be the author of this report. In the realm of the wrestling industry sometimes practical jokes like being unknowingly entered in a lottery draw can happen. The fans were even more amused when I accepted, and they really popped when next pulled out of the bucket was the reigning ‘King of Trancona’, Scott Ripley, to oppose me.

After I demonstrated some old school ground game including an Oklahoma Roll and a Lou Thesz mallet elbow to outwrestle the cocky Ripley, he distracted the referee and blasted me with his sceptre to steal the match. Since I was occupied in the ring I have no photos of the bout, but please enjoy a picture of an amused Steve Stryker, visiting with Knight. 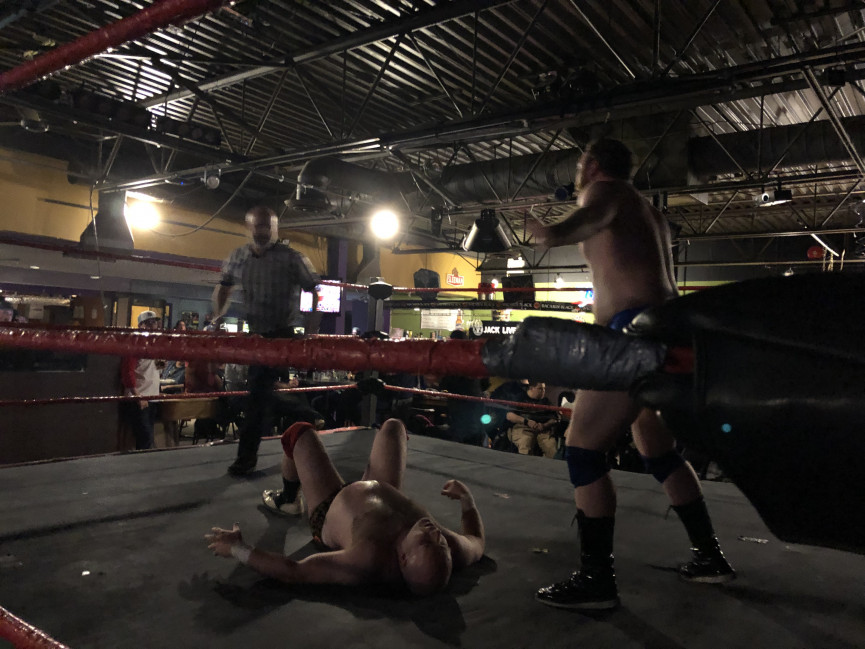 Young Sam Davidson was en route to the biggest upset of his career until wily veteran Vance Nevada snuck a small package into the action for a roll-up pin. 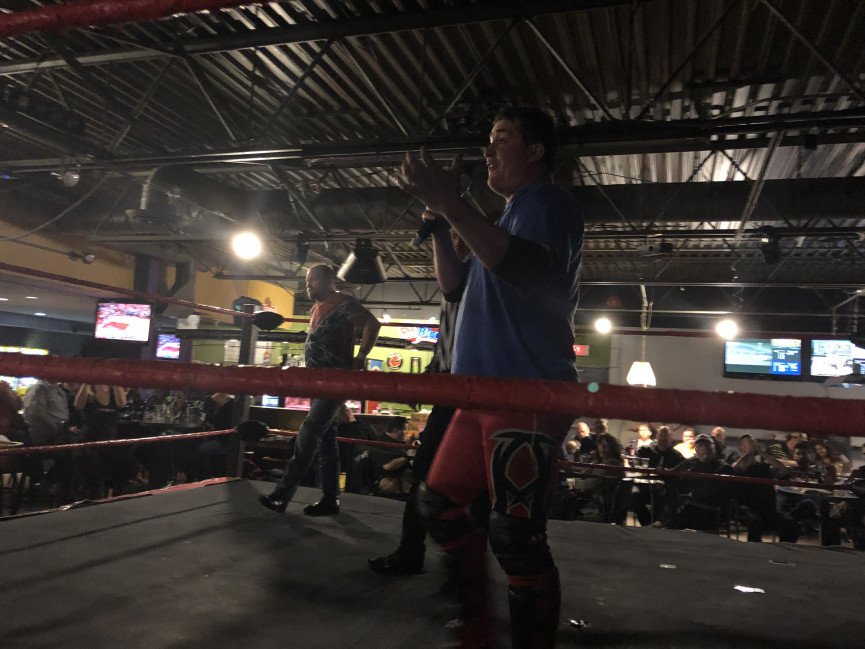 The randomness of the draw process resulted in anticipation building for the return of RedHot Ryan Wood, as the Kirkland Lake hockey GM was ending a 10 year absence from the local wrestling scene. The last name drawn from the beer bucket was The Rebel Bobby Collins, who frequently schooled Woody in his rookie days. 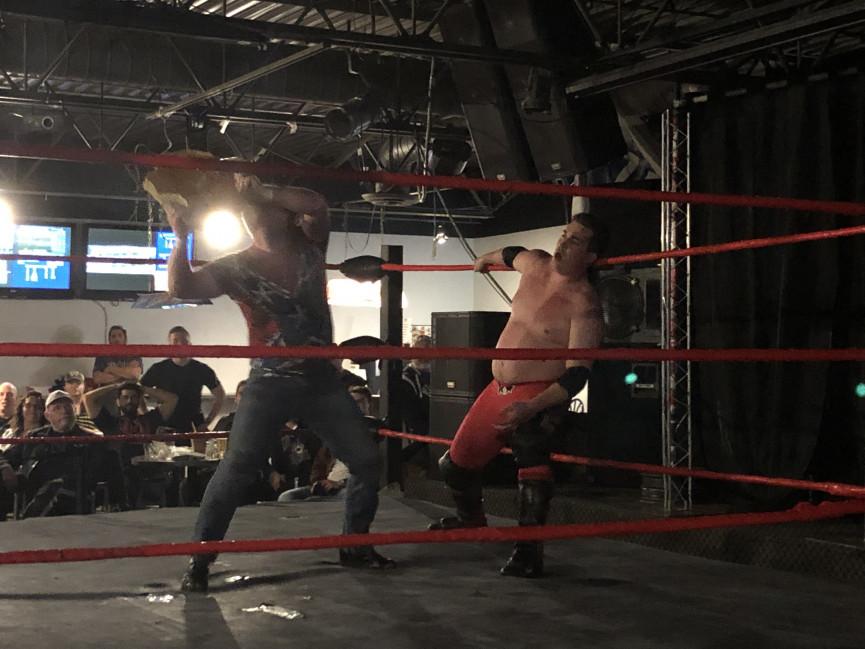 Clearly something has changed with Collins since he was jumped out of the Cannon Corporation last month, as he opted not to blast Wood with the ring bell after all, and ate a superkick to lose the match. 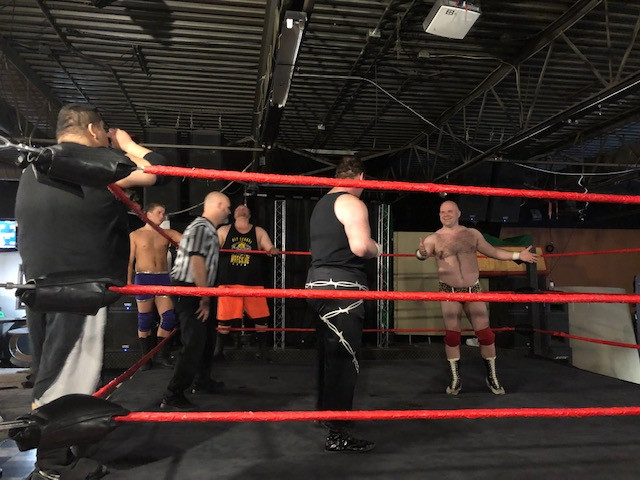 The 7 winners of the singles bouts returned in the main event, an elimination bout with once again the fans drawing wrestlers names at random to set the teams. A coin flip awarded Kevy Chevy to the team of Race, Ripley and Knight. Wood, Nevada and Corleone were unable to beat the odds but under the rules the remaining team had to fight until only one stood tall.

Despite a rowdy gang of supporters urging him on, Ripley ran out of gas and was devastated by Kevy Chevy to be ousted from the Lottery. Chevy celebrated his victory in typical fashion, awaiting any challengers to come forward at the next Rookies CWE card on June 28th. 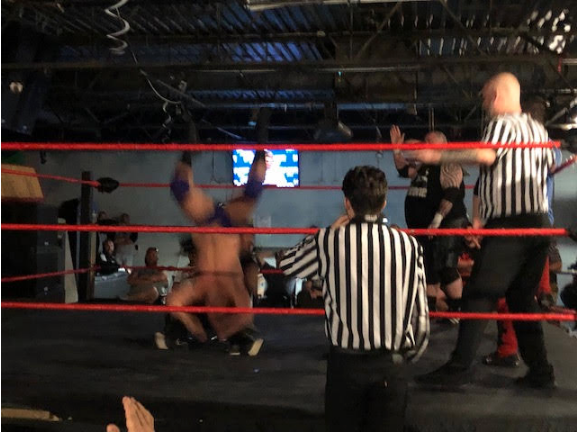 [Marty Gold has been involved as "Dr. Marty Goldstein" in the professional wrestling industry as a writer/producer, TV commentator, wrestler, referee and manager since 1980. To support his sports and news reporting, you can contribute via paypal.me/MartyGoldMedia. His portfolio of wrestling book reviews, interviews and career retrospectives are found online via http://slam.canoe.com/Slam/Wrestling/home.html]