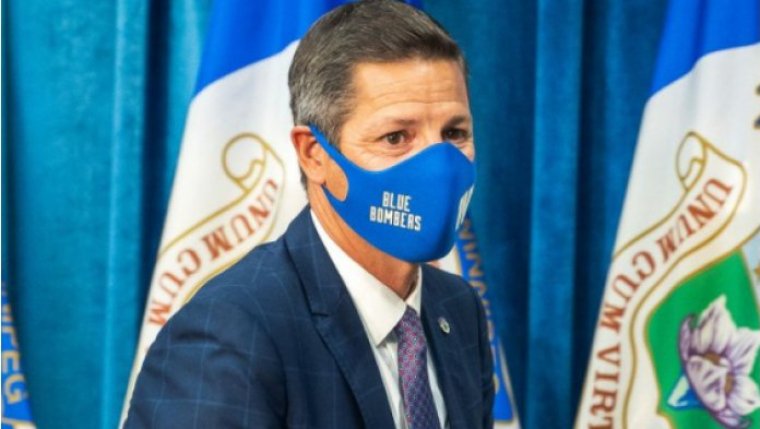 WINNIPEG - Following similar advice from public figures like Jets captain Blake Wheeler, Winnipeg Mayor Brian Bowman is calling on the province to implement a universal mask requirement. Speaking outside City Hall Tuesday, Bowman noted that while the city does have the ability to create its own bylaws to make mask-wearing mandatory, he’s waiting for the provincial government to take the lead for now.

The mayor cited the number of COVID-19 cases “going in the wrong direction” as a major challenge for the city, with active cases nearly tripling since early September. All but four of Manitoba’s 24 new cases yesterday were in Winnipeg.

CBC Manitoba asked for my thoughts this morning on whether non-medical masks should be mandated in all indoor spaces in the Province. The City has already made masks mandatory in all city buildings including Transit busses. Here’s my response. #COVID19 pic.twitter.com/LX4FYcZeGb

Chief public health officer, Dr. Brent Roussin says Manitobans have largely been normalizing and following the advice and “strong messaging” of Manitoba Health to wear masks indoors, with requirements at many businesses and in places like schools. Provincial health officials recommend the use of face masks in indoor public spaces where it’s not possible to physically distance - but Dr. Roussin emphasizes that nothing is off the table.

In late August, the city mandated the use of face coverings in all city-operated facilities and transit busses, enforceable with a $100 fine. During the first couple of weeks since, the city had offered to provide face masks to the public in city buildings and buses as supplies were available. The Emergency Operations Centre called the rule a “reasonable measure” when combined with other precautions like physical distancing and hand-washing.

According to Health Canada, in addition to frequent hand washing (“with warm water and soap for at least 20 seconds” or at least 60% alcohol-based hand sanitizer), staying home when ill, physical distancing, and not touching the face, wearing a homemade non-medical face covering in the community is recommended for times when it’s not possible to stay physically distanced, particularly in crowded public settings. Although in late April the agency stated that wearing a homemade facial covering or non-medical mask in the community has not been proven to protect the person wearing it, the Public Health Agency of Canada does note that when properly worn, they can reduce the spread of infectious respiratory droplets.