Bison Players of the Week 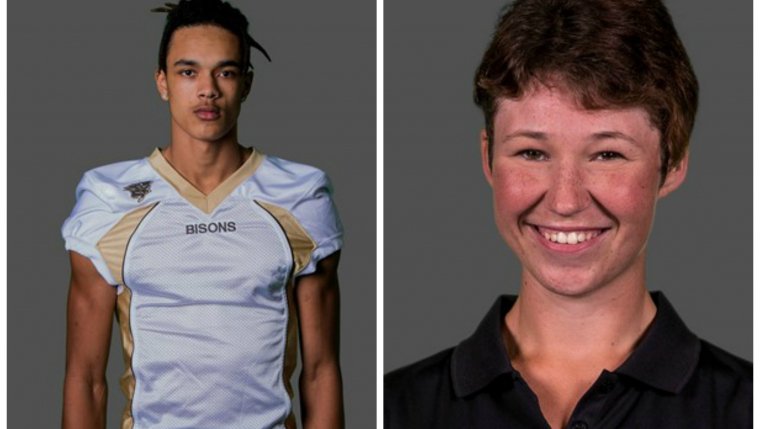 The Boston Pizza Bison Sports Athletes of the Week are a pair of second-years - Arjay Shelley from football and Marissa Naylor from women's golf.

After his team's first win of the 2018 season, Bison football head coach Brian Dobie talked about making winning plays through adversity. Against the Alberta Golden Bears on Saturday, two of those winning plays came from second-year cornerback Arjay Shelley.

Shelley had two interceptions in Saturday's win, both coming at key moments in the game. In the first half, with the Golden Bears up 7-6, Alberta quarterback Brad Baker had his team in a threatening position thanks to a 42-yard catch and reception to Daniel Bubelenyi. Set up at Manitoba's seven-yard line, Baker was picked off thanks to an athletic Shelley leap, swinging momentum back to the Bisons.

Shelley's second pick came in the third quarter with Alberta near midfield, giving the Manitoba the ball back and setting up a 19-point fourth quarter that won them the game. The 37-21 victory in Week 3 was the Bisons' first of the season, after losses to UBC and Saskatchewan.

Shelley's two interceptions on the season puts him tied for second in Canada West, while his 14 total tackles put him 12th in the conference through three games.

One of three former Mission Roadrunners on the Bisons (Jesse Walker, Matt Clarkson), Shelley is in his second year of eligibility with the Herd. He's started all three games this season for Manitoba.

The 1-2 Bison football team now looks ahead to another matchup this week with the Alberta Golden Bears. Kickoff will be at 8 p.m. on Friday, September 21 at Foote Field in Edmonton.

With both Bison golf teams competing in two tournaments, it was a busy seven days for second-year Marissa Naylor. Facing cooler, windy fall conditions, Naylor was unflappable — a pair of top-two individual finishes marked her best week of the 2018 season to date.

On September 10 and 11, Naylor finished second at the Tracy Lane Memorial, played at Bemidji Town & Country Club in Bemidji, Minnesota. Naylor shot a +14 in winds as strong as 56 km/h — her rounds of 82 and 76 had her just one stroke back of the win, as the Manitoba women's team finished fourth.

Then, she improved on that result over the weekend. At the Jamestown Fall Invitational, played at Jamestown Country Club on September 16 and 17, Naylor got the first solo, individual win of her Bisons career. Her rounds of 82 and 78 saw her finish four strokes ahead of the field on the individual leaderboard, as Manitoba finished third as a team. Her previous best result was tied for first at the University of Jamestown Invitational in late August.

Marissa Naylor and the Bison women's golf team now look ahead to the SMSU Mustangs Invitational, played September 22-24 at Marshall Golf Course in Marshall, Minnesota. They then conclude their fall schedule at the Vikes Golf Shootout, October 15-16 in Victoria, BC.