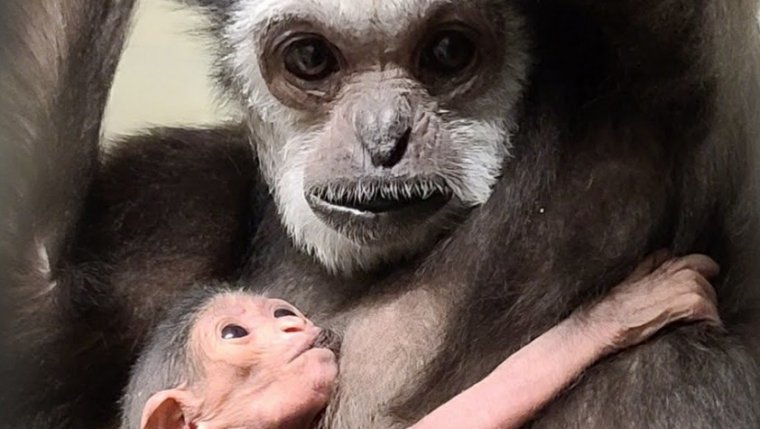 WINNIPEG - Maya and Samson are proud to announce their toddler Salju has a new sibling! The little family that just got a tiny bit bigger, by the way, consists of white-handed gibbons who live at the Assiniboine Park Zoo, where the zoo says the new bebe was born on March 10. This is the second offspring for the pair, who were the first residents of the Zoo's current gibbon habitat, which opened in June 2017.

We are thrilled to share that this Wednesday, Maya the white-handed gibbon gave birth. This is the second offspring for Maya and Samson who were matched on a recommendation from the Association of Zoos and Aquariums Species Survival Plan

For the past few days, the gibbon family has enjoyed some privacy in an off-exhibit holding area, where their care team can discreetly monitor them to make sure both mother and baby are doing well. Maya has been known for being an attentive mom, and zoo conservationists say the gibbons will likely gain access to their indoor habitat at some point in the next several days. The baby’s sex is not yet known, as staff tend to take a “hands off” approach, and only intervene or examine the baby when necessary.

The Assiniboine Park Zoo has seen a lot of success breeding white-handed gibbons, endangered quick-swinging tree-dwellers mainly found in the tropical rainforests of Southeast Asia. The newborn’s older sibling Salju was born there on February 4, 2019, while their mom was born at the same zoo in January of 2011. Maya’s parents both lived in Winnipeg before moving to Niagara in 2011, when the previous gibbon habitat was closed down. Samson’s father was also born at Assiniboine Park Zoo in 1992, and lived there for a couple of years before moving to a zoo in Edmonton.

The match makers behind Maya and Samson’s family ties are part of species protection efforts by the Association of Zoos and Aquariums.