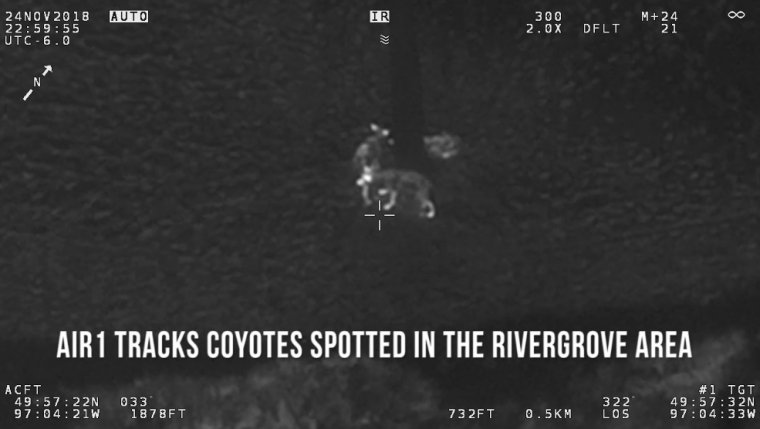 WINNIPEG - An encounter with a coyote on River Grove Drive has led police to caution the public regarding the number of coyotes in the area.

On November 24th at 10:30 pm. police observed a large coyote on a sidewalk on River Grove Drive. It appeared to be following an elderly man and his dog. The police used their air-horn and managed to scare it off.

Air1 later found a number of coyotes in the Kildonan Park Golf Course.

Footage from AIR1 showing the coyotes on the golf course can be found here: https://youtu.be/uPXf_5HYbpw

The Wildlife Branch of Sustainable Development has been notified.

Winnipeg Police are aware of a number of recent incidents of coyote sightings in the northeast areas of Winnipeg. Coyotes are known to be most active during sunrise and sunset hours. Dog owners are advised to keep dogs on a leash, and pick up and carry small dogs if confronted.

Anyone encountering aggressive wildlife within the city is asked to contact Winnipeg Police at either 204-986-6222 if the situation is not an emergency or by 911 if they are at immediate risk.

Citizens are also asked to report any aggressive behaviour involving coyotes to the Wildlife Branch of Sustainable Development at 204-945-5221.