A Grand Old Lady Of Winnipeg 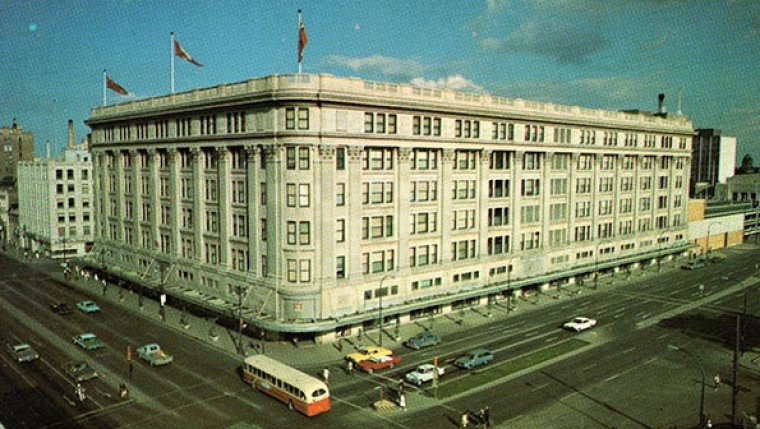 WINNIPEG - It is incredibly rare that I’m moved to yell “All right!” and do the classic fist-pump gesture. Still more so when the reason for my enthusiasm is the Provincial Budget. Nevertheless, that’s exactly what happened this month with the announcement that the Government of Manitoba has set aside $25 Million to kick-start a heritage project to preserve and redevelop the historic Hudson Bay Store at the corner of Portage and Memorial.

My family has had a long association with that particular building. When my father returned home from WWII, he trained as a carpenter and was one of the crew that constructed the Mezzanine Floor at The Bay. Many years later when I became a Bay customer, the Mezzanine was the Imported Foods Department. The place where my mom got her fix of PG Tips loose tea, and New Zealand lamb chops, and where I bought Marmite and Walnut Whip candy.

When I first visited Canada, on vacation, one of the places my mother took us was to lunch at The Georgian Room at The Bay. It was an enormous and very beautiful restaurant on the 5th Floor, which many people will not remember, because it had never been profitable, and as its clientele declined into the 80s and 90s, it was closed. Most people seem to remember The Paddlewheel on the 6th Floor. Food services had an important function: to encourage shoppers to visit the upper floors and pass all that tempting merchandise on the way, and to make it possible to shop all day without leaving the building. I’ve never been one of the world’s Happy Little Shoppers. I’m more like Commando Shopper: I have a plan, I have an objective; I get in, I get out, fast and dirty. No dawdling.

Ah, but The Georgian Room! A remnant of times long past, with its marble, wood panelling, and gilt, its paintings, its crisp white linen napery, sparkling glass, and shining silverware. When I first came to live in Canada, I always had Mondays off, so my mother and I would take the whole day and explore downtown. Lunch at The Georgian Room was de rigeur, and it was always glorious. It was a calm (expensive) oasis in a busy day and we never had the least inclination to rush our lunch experience. The staff was polite and efficient, and they served the best coffee I’ve ever tasted. One could sit in the centre of the room and feel like one of the high powered business people who lunched there, or one could sit at a small window table and watch the world wag past on Portage Avenue.

Later, I had the privilege of working at the Downtown Store while I was training; only for a week, but it was An Experience. I felt like part of history in a strange way. I was headed out to work at the then-brand-new St. Vital Store, which was also an historic experience.

Now, this grand old lady, opened in 1926, and one of the last huge retail department stores remaining on the continent, is closed, and needing to be rescued. I’m by no means wealthy; not the type who runs around investing in things on a whim, but I would love to be part of any project that rescues and preserves that lovely Heritage building, which has graced that corner for so long. Its sheer size is astonishing; it occupies an entire city block, and its square footage is equivalent to a huge, vertical, six-storey mall. It will need incredible amounts of money to bring it up to Code, never mind any development plans that may be put forward. Still, I think she is worth saving, for all the background she has provided, for all the texture she has contributed, to life in Winnipeg, to the memories of generations for whom “going shopping” or “going downtown” meant “going to The Bay”.