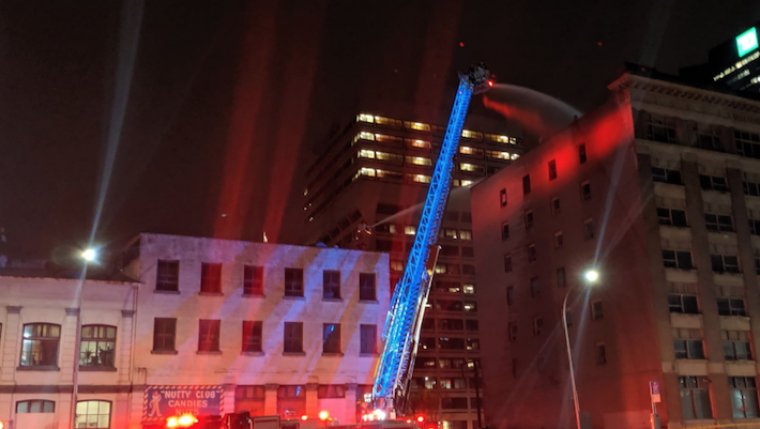 The overnight fire that devastated a historic Portage Avenue East building was something city officials were warned would happen -because reconstruction had come to a halt and the unattended site had become a safety risk, says a neighbouring businessman.

Les Bester, president of Les.net located in the Nutty Club building at the corner of Westbrook St.east of the torched project, says he and others had been warning that the stream of vagrants and adventurers drawn to the gutted office building at 138 Portage was going to end badly.

And, he says, it could have been far worse.

"I got a business and staff that depend on me and there was a higher than average fire hazard next door? My type of business and infrastructure isn't 'oh everything burnt down, let's set up somewhere else'. It would take a bunch of money and equipment to re-establish when you're running a phone company."

After renovations on the proposed Hyatt Place Downtown stopped about a year ago, the Keewayden Building, built in 1909 and later renamed the Crowley Building and designated a historic building, became a problem for the area. Wood and other debris was being dumped requiring Bester's staff and landlord to alert 311. Also, there was the matter of an abandoned truck.

"We called 311 and the fire inspector came by, we called them about a pile of renovation scrap that piled up against our building and then there was an Ontario plated truck left for a year. Finally a guy was plundering it for parts. It started getting stripped for 3 hours a day - someone was nesting in the back seat, the entire exhaust system was in back of the truck, the windshield was blown out. The cops stopped by a couple of times, I said hey the window of the building was open, people would use the truck to climb into the building. This was two or 3 months ago on the non-emergency line."

"It's a safety thing for us all. If somebody's there spending 20 hours a week stripping parts off a truck - we saw it repeatedly - anyone like my employees going to their car in the lot trying to ask questions, would they get a hammer?"

“The type of person who’s going to lodge in that building, the downtown type who walk around at night in the summer, we’d see come and go after a few hours. The element that’s staying in the building isn’t my main concern", Bester said. "It was a clearly an abandoned building that became a common place for people that becomes a risk."

The scaffolding left behind the building after the project halted also attracted adventurous young types who wanted to scale the historic site to take pictures of the skyline and surroundings.

"There's scaffolding set up at the back corner and a wood hoarding where you can shimmy thru and get access to the upper floors, they go up the scaffolding and in thru a window," he explained, saying he had personally boarded up a lower floor window earlier this summer.

Bester, who provides fibre optic connectivity to a growing network downtown, said he warned officials, "As soon as it gets cold, people were going to start staying in there more and it WILL burn down. It was stripped down to wood and concrete.”

“In Downtown Winnipeg? A building that's abandoned- what do you think is going to happen? It' s going to go up in flames." 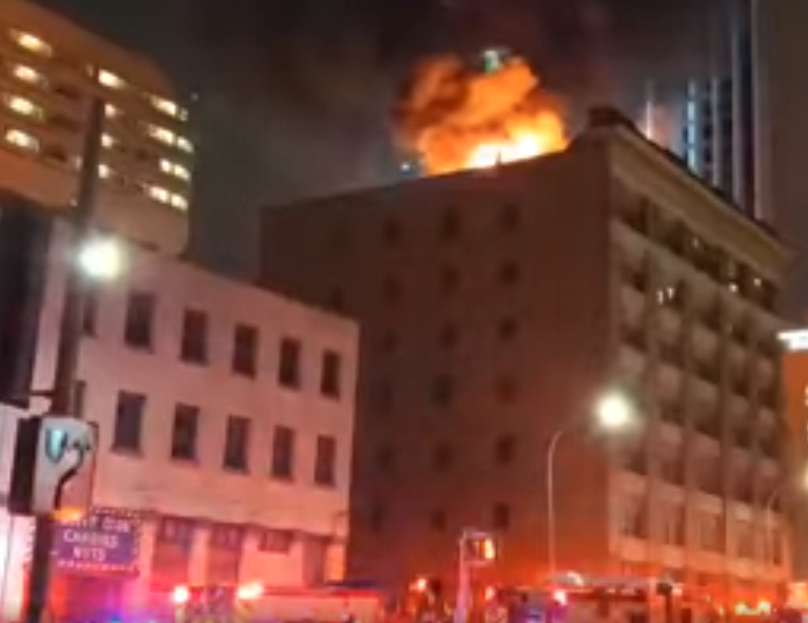 Bester noted that decades of accumulated sawdust and particulates in the elevator shaft would be a powder keg only needing a spark.

“I thought I was being paranoid at first but then when the guy I see sleeping in the back lane all night, he said he had called the police about people going in to the 138 because we don't want them burning it down and we have to move. That was 4-6 weeks ago. The police started attending a little more frequently. I wasn’t the only guy who called I'm sure."

Online reaction to the fire, which took 13 fire trucks to keep under control, backed up his belief he was not alone.

"Multiple people who work in the surrounding buildings myself included called in complaints to 311 when squatters had began to take it over and were seen tossing scrap out the windows narrowly missing vehicles parked in the lot outside. At this point they should be held accountable for inaction."

Another post online confirmed the spiralling decay at the site.

"I work next door at BellMTS...the renovation for a new Hyatt Place hotel there was actually abandoned almost a year ago with no activity in it since. It was sad to see it just sitting there rotting away."

Awoken by a call from a customer, Bester hustled from near the Law Courts to the fire at about 5 am and began to smell the burning fire as he neared Main Street. Bester's business location is separated from 138 Portage by a parking lot but was still at risk from the fire spreading or worse yet for his business, the Hydro power being turned off. However had the west wind been a stiffer breeze , the result could have been "like a terrorist attack".

"Now for my customers, people would lose their phone number for a few days. But - that building is actually closer to MTS and its 2 diesel generators than to Les.net. With the wind blowing towards it, if BellMTS stuff burnt down it would be like a - a provincial level economic catastrophe."

A founder of the Manitoba Internet Exchange (MBIX), Bester has numerous cameras filming the perimeter of his premises, and went into detail about the sights they captured - including a suspect - as an array of Nuit Blanche revellers added to the typical late night wanderers and stragglers.

He observed that "Part of the action last night included 20 different people taking a piss in the back lane and one couple trying to have sex. A bunching of cyclists came by at 1:30ish - 2 lanes thick of bicycles and a giant traffic jam following them. The first whisp of smoke was at 2.27 AM and a gaggle of pedestrians walking by every 20-30 seconds stopped" to watch the emergency unfold and first responders arrive at 2.34 AM.

Bester says he has told authorities of surveillance video showed someone climb down the scaffold with a duffle bag around 10.30 Saturday night, wearing a white mask.

"Walking out of the building a couple of hours before it burns, that's a trigger". 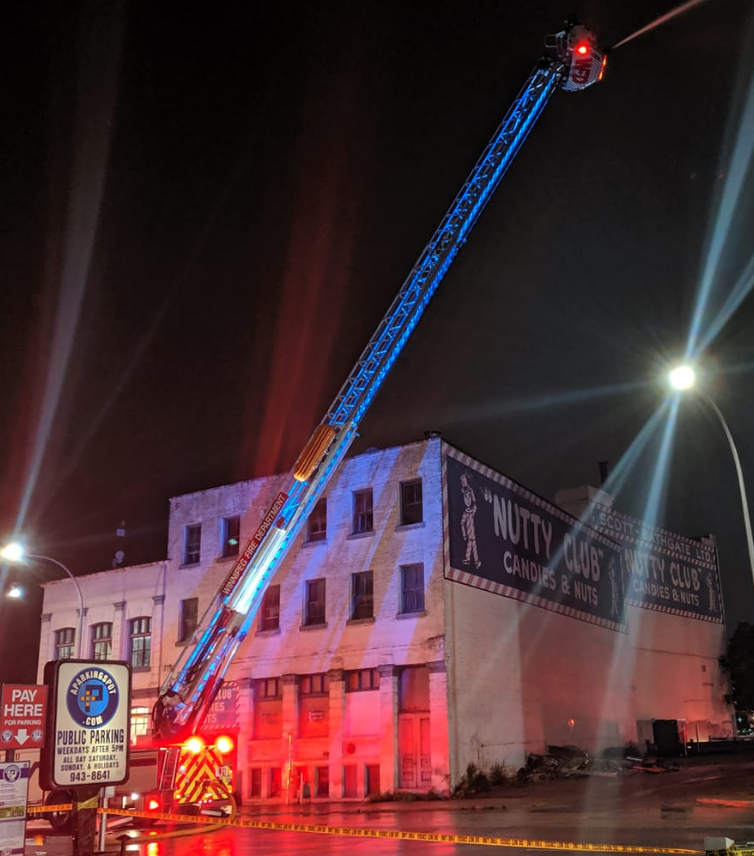 That the abandoned Hyatt Hotel renovation next door - highlighted by the pillaged Ontario truck and non-functional fire suppression system - was allowed by city officials to deteriorate bothers him as someone who keep a keen eye - and video cameras - on downtown safety.

"It's frustrating. Thirteen fire trucks were there. Thirteen! What did the resources - the fire trucks and cops responding - cost us? Sheets of plywood could have boarded it up. What if people had been inside it?"

In conclusion, Bester had a word for other property owners downtown: "Until you see the building next to you burn you really don't appreciate "Hey, I should have a really good fire plan".

{ Marty Gold has been around City Hall and the Legislature for over 30 years bringing unique news and analysis to public attention on radio, TV and online. Readers can support his work and see more stories on his news blog