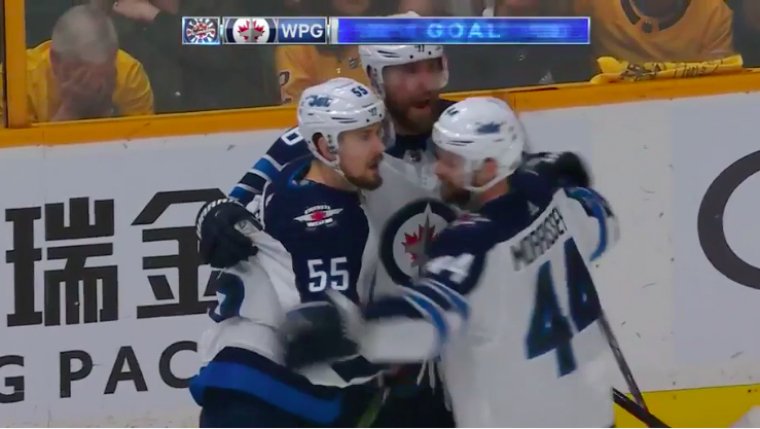 WINNIPEG - The Jets win game seven in Nashville, Mark Scheifele sets an NHL record and we're still playing hockey in Winnipeg in May!

The Jets and Vegas Golden Knights will meet in the Western Conference Final after the Jets knocked off the defending Stanley Cup finalist, and first place overall Nashville Predators on Thursday night. That’s what everyone predicted at the beginning of the season right?

In a series which saw each game deliver a different storyline, no team could take advantage of home-ice, with the road teams winning five of the seven games overall in the series, including Thursday night’s contest in Nashville.

In the previous two games in Winnipeg, the Predators scored first and shut down the neutral zone to protect their leads, and it proved successful in each attempt. Scoring first in Game 7 wasn’t imperative, but it’s something the Jets wanted, and they got it thanks to Tyler Myers.

The 6’8 defenseman skated down into the Predators corner before letting a shot go from a bad angle that snuck its way under the left pad of Pekka Rinne and in. Just under two minutes later Paul Stastny had a couple of whacks at the puck at the side of the net, lifting the second opportunity up and over Rinne, who was ultimately yanked after allowing two goals on seven shots. Rinne, who was coming off a 34-save shutout in Game 6, would watch 23-year-old Juuse Saros the rest of the night.

Nashville would get within one before the period ran out. Kyle Connor was called for a mild cross-check on P.K Subban with just over five minutes to go in the period. Subban took a glance at Connor, and fell fairly easily, drawing the penalty. To make it sting just a little bit more, Subban would score his fourth power play goal of the series just moments later to cut the lead to 2-1.

That’s as close as they would come as Mark Scheifele scored his first of two on the night late in the second period to give the Jets some insurance heading into the third period. Stastny and Scheifele would each light the lamp in the final frame to secure the win and a berth in the Western Conference final for the first time in franchise history.

With his two-goal effort, Scheifele set a new NHL record, finishing with seven road goals in the series and now has an NHL-leading 11 in the playoffs.

The players deserve a lot of the credit, but Jets GM Kevin Cheveldayoff and his staff should be right there with them as their moves were catalysts in the Game 7 victory. The GM acquired Paul Stastny at the trade deadline this past February, and the 32-year-old veteran had a pair of goals and an assist and now has six goals and 14 points in the post-season. Tyler Myers, acquired in the Evander Kane deal in 2015, scored the all-important first goal of the game, and Mark Scheifele, the Jets first-ever draft pick, seventh overall in 2011, scored a pair of goals in the win and finished the series with 11 points (7G, 4A).

And Connor Hellebuyck, the 5th round pick from 2012, was solid in net yet again for Winnipeg, knocking aside 36 shots on the night. The 24-year-old Vezina Trophy finalist, playing in his first career NHL Game 7, showed no signs of nerves as he picked up his third road win of the series, and 8th win overall in the post-season.

The win sets up a third-round matchup against the Vegas Golden Knights. Vegas won the regular-season series with the Jets 2-1. Winnipeg will host the first two games of the series beginning Saturday night at 6:00pm, with Game 2 scheduled for Monday night at Bell MTS Place.