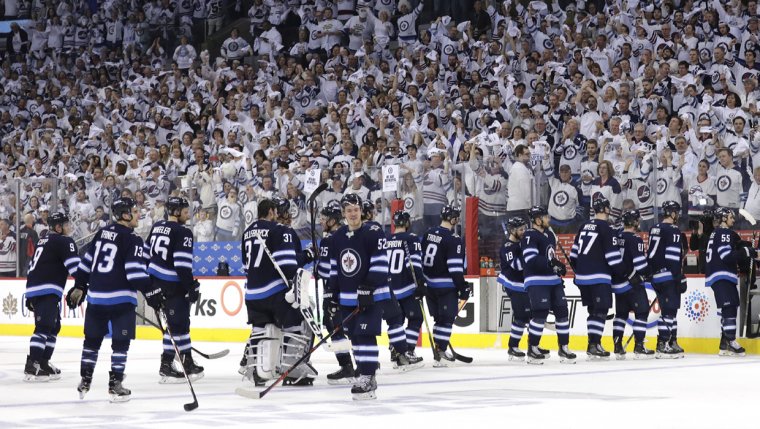 WINNIPEG - The Winnipeg Jets have punched their ticket to the second round of the Stanley Cup Playoffs with a 5-0 win, their 12th straight victory at Bell MTS Place. On the heels of a game four victory in Minnesota, the Jets flew back to Winnipeg and put together a solid gave five performance in front of 16,345 Manitobans jammed inside the arena. The opening round series win was the first of its kind in the history of the Winnipeg/Atlanta franchise.

Once again, the Winnipeg Whiteout was in full effect Friday. On top of the capacity crowd gathered inside the arena, the Whiteout street party hit new heights, with approximately 20,000 partiers taking in the game from the neighbouring streets. The street party grew so rapidly that the Winnipeg Police were forced to shut down/barricade additional streets, for the sake of the swelling shindig.

No Ehlers? No problem. With Nikolaj Ehlers serving as a late scratch with an undisclosed injury Friday, it took Jacob Trouba and the Winnipeg Jets all of 31 seconds to score their first goal of the game, taking flight very early. Following an excellent pass to the point from first line centerman Mark Scheifele, Trouba walked right in to the Minnesota net before picking a corner and ripping a hefty shot through Devan Dubnyk, handing the Jets an early 1-0 lead.

It didn’t take much longer for Winnipeg to strike again. Just five minutes later, on a clean Paul Stastny faceoff win, Dustin Byfuglien put the rubber on net, teeing up Bryan Little with a perfect redirection opportunity. He did just that, handing the Jets a two-goal lead just 5:42 into the game.

But Winnipeg’s work wasn’t even close to being done. 11:10 into the period Brandon Tanev collected a loose puck in the Wild zone and quickly stepped into a low wrist shot that beat Dubnyk just under the glove. Before the capacity crowd gathered at Bell MTS Place even had a chance to sit down, Byfuglien put another puck on net that found its way past the be-Wild-ered netminder, by way of a Joel Armia deflection.

The fourth Winnipeg goal marked the end of Dubnyk’s night, as backup goaltender Alex Stalock made his playoff debut for the Minnesota Wild, relieving Dubnyk midway through the first period. In typical Winnipeg fashion, those gathered at Bell MTS Place loudly chanted “We Want Dubnyk!” following his removal from the game.

All four Jets goals were the first 2017-18 playoff markers of their respective scorer’s postseason. In fact, only Bryan Little had ever scored an NHL playoff goal before in his career. Trouba, Tanev and Armia collected their first career postseason markers Friday.

After an eventful first period that saw Winnipeg out-shoot, out-hit and out-score Minnesota heavily, the Jets and Wild calmed down for a second period that featured zone pressure by both Central Division opponents. Although the Jets did not score a second period goal, it wasn’t for a lack of trying. Coming in cold, Stalock stepped up to the plate mightily, denying Winnipeg from all of its scoring chances in the second frame. The Wild were also held without a goal through 40 minutes of play.

Following his first period goal, Winnipeg’s Joel Armia did not take another shift for the Jets. He left the game after the opening period, and Winnipeg ran with 11 forwards for the remainder of the game. It didn’t seem to hurt the Jets much as Mark Scheifele added to the onslaught with his fourth goal of the playoffs just 32 seconds into the third period,

The Jets received a boost to their blueline as recently injured Tyler Myers returned to the fold after missing game four with a lower body injury. Myers return to the lineup was seemingly counteracted by the removal of Josh Morrissey, who served his one-game suspension for cross-checking Eric Staal on Tuesday. Alongside Ehlers, Morrissey certainly picked the right game to miss out on, as his absence on the blueline was hardly even noticed.

Matt Hendricks drew back into Winnipeg’s lineup for the first time since March 11th. Backup goaltender Steve Mason injured himself at the beginning of Friday’s morning skate and was helped off the ice. Winnipeg recalled goaltender Michael Hutchinson to serve as Connor Hellebuyck’s replacement.

Once again, the Wild were without alternate captain and leading playoff goal scorer, Zach Parise, who missed his second straight game after fracturing his sternum late in game three on a sandwich style hit by Mark Scheifele and Ben Chiarot. His presence on the Minnesota bench and in the dressing room was certainly missed.

The Jets will now face either the Nashville Predators or the Colorado Avalanche in the second round of the playoffs. The Preds are currently leading the Avs three-games-to-one in their respective opening round matchup. Action from the Western Conference Semifinals is expected to get underway next weekend, with a full schedule release coming soon.