Oh What a Night, Winnipeg Fights Back to Win 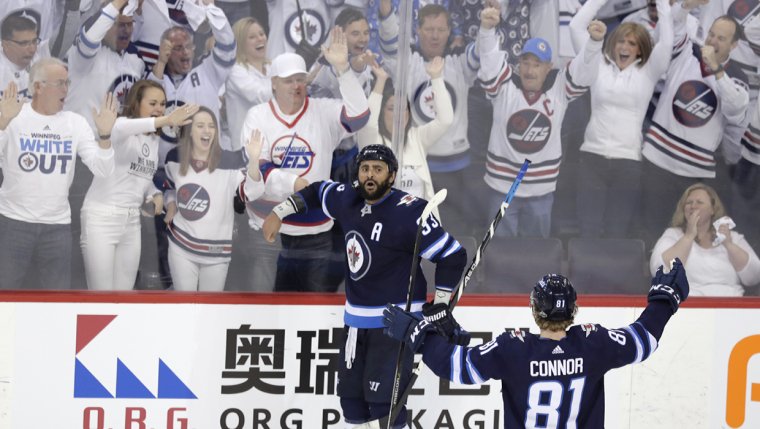 WINNIPEG - It was an amazing night in downtown Winnipeg.

The Winnipeg Jets came back from three goals down, put on an incredible performance in the second period, got two goals each from leaders Blake Wheeler and Dustin Byfuglien (who was outstanding) and then scored two empty netters to beat the Nashville Predators 7-4 in Game 3 of the best of seven Western Conference semifinal (Central Division final).

With the win, the Jets took a 2-1 series lead with Game 4 back at Bell MTS Place on Thursday. The Jets have not lost at home since Nashville beat them 6-5 on Feb. 27 – that’s 13 straight wins.

It was a truly inspiring night for the Jets. Especially after the horrendous first period. Granted, the Predators took a quick 2-0 lead, helped in no small way by a dreadful call by referee Francis Charron.

Mike Fisher scored the opening goal at 4:53, tapping home a loose puck in the crease that just snuck through Jets netminder Connor Hellebuyck.

Then Predators defenseman Mattias Ekholm fell on his own accord, but Charron, who didn’t see the play, called a tripping penalty on Blake Wheeler at 8:44. A minute and 22 seconds later, on the power play, P.K. Subban fired a shot through Hellebuyck that just trickled over the line to give Nashville a 2-0 lead.

At this point, Bell MTS Place was a morgue.

But it got even quieter at 17:35 when Austin Watson fired a low shot past Hellebuyck to make it 3-0 and for a full house inside the building and 20,000 on the streets of Winnipeg, it was a devastating goal.

But there was no quit in these Jets. 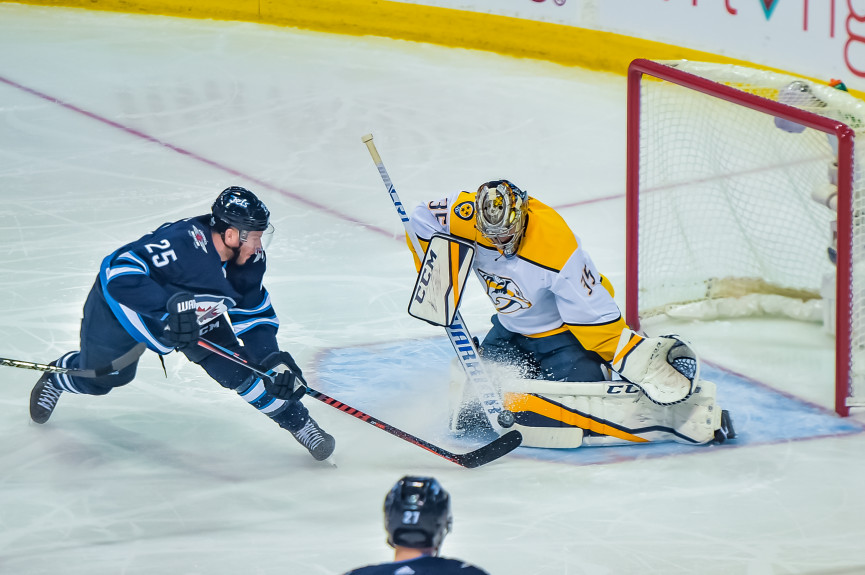 Winnipeg made it 3-1 at the 2:38 mark of the second period when Paul Stastny had a shot from Jacob Trouba deflect off his skate and into the net. Trouble is, it hit the camera stanchion inside the goal and the official, standing right there, missed it. He had no clue and was waving it off.

The players had to wait until play ended in order to allow the officials to check the video. At this point in the proceedings, Charron and Brad Watson, the two guys in the striped shirts with the orange bands who were sent by the NHL to manage this game, had barely seen any of it.

Incredibly, it got worse. Nashville’s Austin Watson went head hunting for Blake Wheeler and nearly succeeded with a vicious check to Wheeler’s skull. Mark Scheifele went to Wheeler’s defense and tried to engage Watson, but the big Preds’ winger turtled and when the ice chips cleared, Charron gave Watson a charging penalty (clearly should have been five and a game) and Scheifele a roughing penalty. 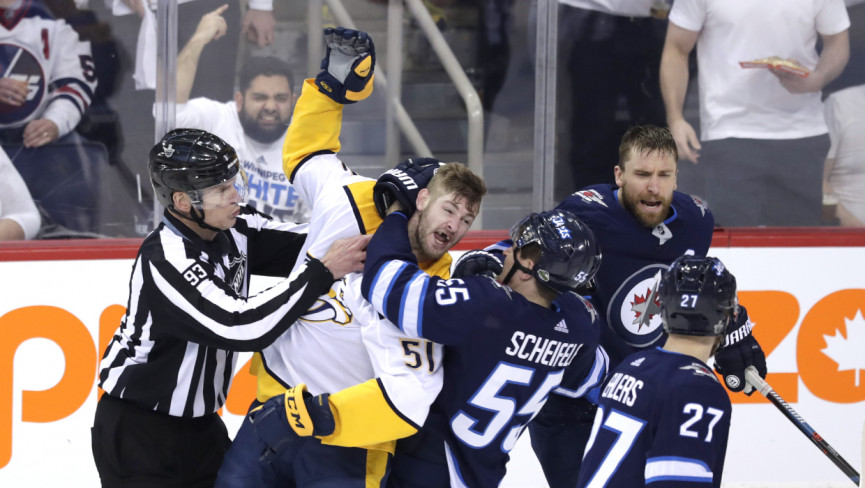 But the roughing penalty to Scheifele fired up the Jets. With their top playoff scorer in the penalty box and the teams paying four-on-four, Dustin Byfuglien ripped a laser past Pekka Rinne to make it 3-2 and then, 18 seconds later, Jacob Trouba beat Rinne on the doorstep to tie the game. At that point, the roof nearly came off Bell MTS Place.

Despite all the interference, holding, high-sticking, cross-checking and hooking that wasn’t called – they were letting them play, as they say -- the game settled down for almost 14 minutes before Patrik Laine found a wide open Byfuglien. Big Buff ripped a shot past an outstretched Rinne and at 19:15 of the second period, the Jets had come all the way back from a 3-0 deficit to take a 4-3 lead. Byfuglien even did a little dance after he scored the go-ahead goal – his second goal of the game. 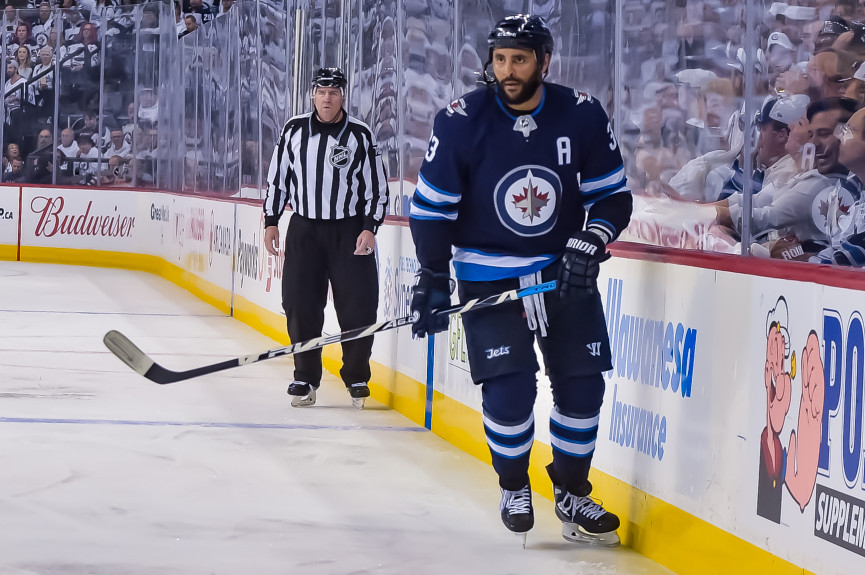 It was an incredible comeback. The Jets scored four unanswered when they absolutely needed the offensive explosion and suddenly the downtown party was much more festive.

After being outshot 12-10 in the first period, the Jets outshot Nashville 16-6 in the second and that number actually flattered the Predators. Winnipeg completely owned the period and heading into the third, the white-clad crazies were euphoric.

Not surprisingly, the third period started with a fight. A minute and a half in and Nick Bonino and Jacob Trouba slashed each other a few times, cross-checked each other a couple more and then dropped the gloves. Charron and Watson had lost control of the proceedings and it was starting to show.

Eventually, Filip Forsberg beat Hellebuyck on a screen shot on the power play at 7:40. The goal seemed inevitable, although the penalty to Jack Roslovic was as phony as a politician’s promise. Especially on a night when infractions that would get you time in prison weren’t called.

With 9:22 to play in the game, Hellebuyck might made the biggest save of the game and the series. Jacob Trouba made a mistake at the Nashville blue line and Viktor Arvidsson was all alone from the Nashville side of centre. But Hellebuyck made a tremendous glove save that brought the crowd to its feet.

That’s about the time the Jets got back-to-back power plays. After the first attempt fizzled, Nashville’s P.K. Subban decided that because he’d been able to get away with high-sticking and cross-checking all night, he could get away with it right in front of Watson. He couldn’t. After nearly taking Nikolaj Ehlers’ head off, Watson called Subban for, you guessed it, high sticking. Subban griped about it, rather loudly, after the game.

However, on the ensuing power play, Wheeler banged home a Scheifele rebound from a tough angle and the Jets went ahead 5-4 with 4:59 to play. 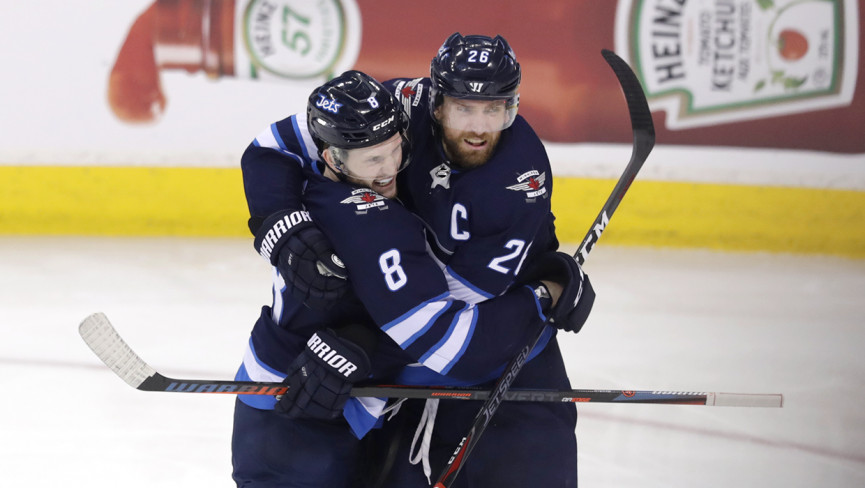 With a minute and three seconds left, the Predators pulled Rinne and went with six attackers, but at 19:09, Wheeler fired one from right near his own circle, all the way down the ice into the empty net – his second goal of the night -- and the Jets had a 6-4 lead. With the net still empty, Brandon Tanev, who played hard for every second of the 13 minutes and 38 seconds of icetime he logged, led a rush and scored another empty netter to give the Jets a 7-4 win.

Winnipeg outshot Nashville 45-30 – 16-6 in the second period and 19-12 in the third. Nashville went two-for-four on the power play while the Jets were one-for-five. Byfuglien, the game’s first star, logged 27 minutes and 12 seconds of ice time and had two goals and an assist, four shots, three hits and was plus-three. Wheeler had two goals and an assist in 22 minutes and 46 seconds of icetime with eight shots and two hits. Paul Stastny had a goal and two assists is just 16 minutes and 41 seconds and was plus three.

Scheifele had two assists and Trouba had a goal and an assist. 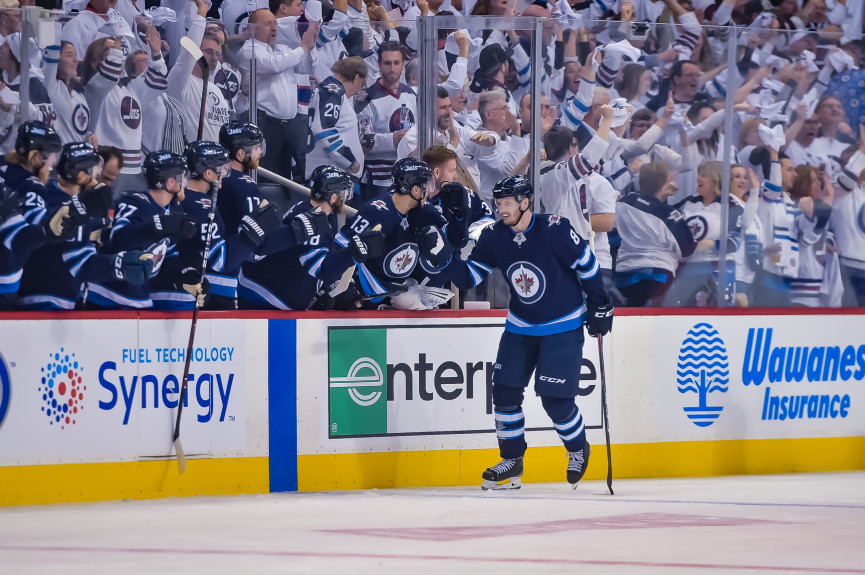 Regardless of the way the game started, the Jets were simply better by the end. When they needed to score, they did and when Hellebuyck needed to make a save, he did.