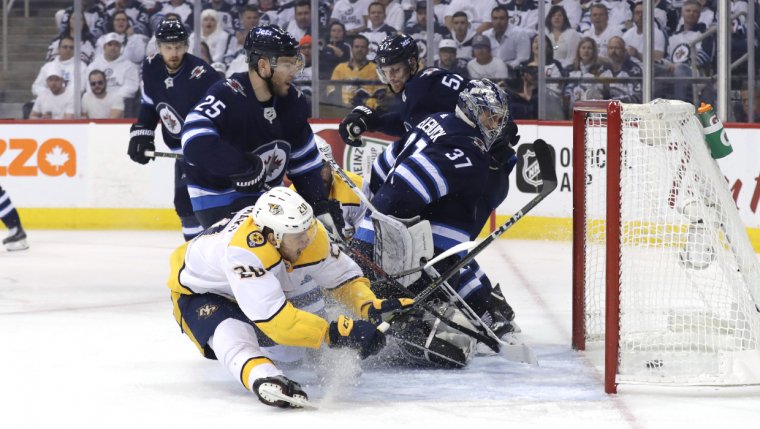 WINNIPEG - The Winnipeg Jets played a frustrating hockey game on Thursday night. As a result, they’re now in a 2-2 series tie with the Nashville Predators.

As a result of two late penalties in the second period, the Jets just seemed to lose all of their jump and conversely, the Nashville Predators found theirs, as the Preds escaped Bell MTS Place with a 2-1 win.

Thanks to the clutch road victory, Nashville tied the best-of-seven Western Conference semifinal (Central Division final) at two wins apiece and regained home ice advantage. If the Jets expect to win the series, they’ll have to win at least one more game on the road.

The team with the best home record in the NHL this season (32-7-2), lost at home for the first time since Nashville beat them 6-5 on Feb. 27. Winnipeg had gone 13 straight games without a loss at Bell MTS Place, but on Thursday night, they fell behind 2-0 late in the second period despite outplaying the Predators, and then couldn’t solve the Predators’ defense and goaltender Pekka Rinne until the dying seconds of the final period.

For Winnipeg, it was a night of missed passes, mid-ice turnovers and an inability to penetrate the Nashville defense. After playing so well for the final two periods in Game 3 and the first period and a half of Game 4, the Jets didn’t have much to offer in the final 30 minutes – until they got a later power play -- on Thursday.

It was a sad night for a full house inside Bell MTS Place and for 20,000 white-clad crazies out on the streets next to the rink. For Jets fans, it was simply a frustrating game to watch.

“They played a tight defensive game,” said Patrik Laine. “It was difficult just to get into their zone.”

Nashville opened the scoring late in the first period after the Jets missed six glorious scoring chances. Ryan Hartman picked up a loose puck in front of Connor Hellebuyck and banged a floater over his glove at 17:20 to make it 1-0. The Jets outshot Nashville 12-9 in the first period and had six dangerous scoring chances to Nashville’s three. However, Winnipeg found itself behind heading into the second period.

The Preds took a 2-0 lead at 14:36 when P.K. Subban scored a power play that Hellebuyck seemed to have in his body but allowed to slip through. This turned out to be the winning goal, the second of Subban’s playoff career.

Subban scored on Nashville’s fifth shot of the period. At one point, Winnipeg had outshot the Preds 9-2, but hadn’t had too many dangerous scoring chances.

Didn’t matter later in the period referee Eric Furlatt, called a weak hooking penalty on Adam Lowry. Thanks to two late power plays for Nashville, the Preds had 10 straight shots at Hellebuyck and scored on one of them. Nashville ended up outshooting Winnipeg 13-11 in the period.

In the third, the Jets started out a man short, but easily killed off the final 40 seconds of Lowry’s penalty. From that point forward, Winnipeg had no answer for the Nashville checking system. They couldn’t get the puck into Nashville’s zone and when they did, they couldn’t keep it there.

With 2:02 left in regulation time, Sutherland called a cross-checking penalty on Nashville’s P.K. Subban. Jets coach Paul Maurice went with six attackers and kept the pressure in the Nashville end. With 49.6 seconds remaining, Paul Stastny won a big faceoff in the Preds zone and Laine whipped a wrister through the legs of Rinne to make it 2-1.

But that was it. Despite a couple of reasonable chances in the final minute, the Jets simply ran out of time and now their backs are against the wall.

Winnipeg outshot Nashville 33-29 – 10-7 in the final period. Both Nashville and Winnipeg went one-for-three on the power play.

“I liked the way we played, I thought we had some good chances,” said the game’s third star, Bryan Little of the Jets. “We just one of those nights when nothing went in for us. They sat back and clogged up the neutral zone and played a simple defensive game. We were skating into a wall and we have to find a way to beat that.”

Dustin Byfuglien wasn’t one the game’s stars, but he played well again. In 27 minutes 50 seconds of ice time, he had two shots and a team-high seven hits. Jets netminder Connor Hellebuyck made 27 saves while Rinne won the battle of the goaltenders and was the game’s first star with 32 stops.