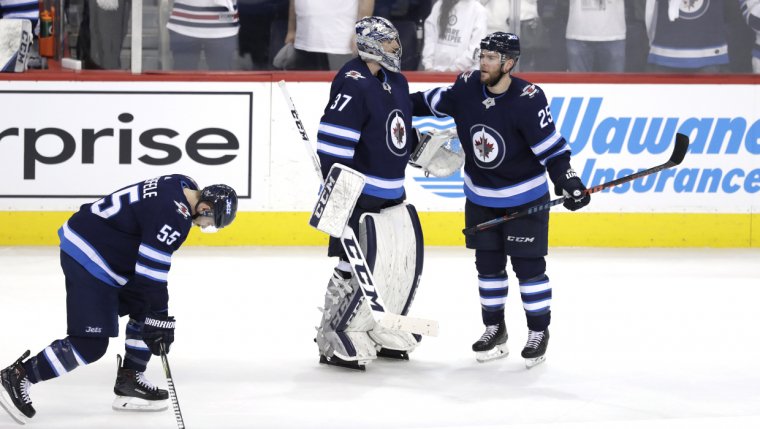 WINNIPEG - The Winnipeg Jets had the best season in their history, but that season has come to a disappointing end.

And with it, their dreams of raising hockey’s Stanley Cup.

In what has turned out to be one of the most incredible stories in the modern history of North American major professional sport, an expansion team -- a team that did not actually exist until the expansion draft in June of 2017, is now four wins away from hoisting the Stanley Cup.

On Sunday afternoon, in front of a loud, full house at Bell MTS Place, the Brand new Vegas Golden Knights beat the Winnipeg Jets 2-1 to eliminate the Jets from the playoffs.

However, the Knights not only handed the Jets their first four-game losing streak of the season, they never trailed once in the final four games of the series as they surprised everyone in pro sport and will face either the Tampa Bay Lightning or Washington Capitals in the Stanley Cup final.

Vegas head coach Gerard Gallant recalled the day he realized the Knights were more than just a run-of-the-mill expansion team.

“I really believed in our team right around the All-Star break,” he said. “We had a tough trip going to Nashville, Dallas, back-to-back nights on the road. We come out of those games, we outplayed both of those teams, played great hockey. That's when I said to myself, this is a special team, the character on this team, they believe they can beat anybody. Going into those two buildings at that time was a big, big boost for us. It was a confidence builder for me, too.”

The Knights won the final four games of the series after the Jets took the opener 4-2 in Winnipeg. They won Game 5 because, once again, goaltender Marc-Andre Fleury was the best player on the ice.

Amazingly, early in the first period, the Jets looked done. They were slow, clumsy and every one of them seemed to be suffering from “the malaise,” something that Jets head coach Paul Maurice had talked about earlier in the playoffs.

Winnipeg took the first penalty, a chintzy slashing call against Dustin Byfuglien at 2:43, and although the Jets fought it off, they didn’t seem to have much in the tank at the end of it. At 5:11, Alex Tuch of the Knights found himself with the puck high in the slot and beat Jets netminder Connor Hellebuyck with a wrist shot high to the stick side. It was 1-0 Vegas and for the next three minutes, the Jets couldn’t get the puck out of their own end.

At one point, before the seven-minute mark, Vegas had outshot Winnipeg 7-1. So much for the promise of a fast start in front of a loud, emotional home crowd at Bell MTS Place.

However, with eight minutes left in the period, the Jets started to show some life and big Dustin Byfuglien had two great scoring chances that were both foiled by Fleury, who is one of the main candidates for the Conn Smythe Trophy as NHL MVP. Eventually, Vegas was forced to take a penalty as Colin Miller interfered with Nikolaj Ehlers and the Jets had their first power play at 12:47.

Winnipeg had a couple of scoring opportunities, but only two shots on goal. However, they started to show a lot more life.

The awakening paid off at 17:14 when Bryan Little won a faceoff cleanly, got the puck to Josh Morrissey and Morrissey rifled a one-time slapper under the bar over Fleury’s glove to tie the game. It was Morrissey’s first goal of the playoffs.

At this point, the Jets were taking the game to Vegas. The Knights hadn’t had a shot in 11 minutes and Winnipeg was peppering Fleury. In fact, the Jets had 11 consecutive shots at Fleury before Vegas flipped a weak one at Hellebuyck. Winnipeg outshot Vegas 12-8 in the first period and owned the final 11 minutes in every possible way.

In the second period, there was plenty of give-and-take with Vegas and the Jets both taking 11 shots through the first 13 minutes. That’s when Luca Sbisa flipped a high wrist shot from the point at Hellebuyck that Winnipegger Ryan Reaves deflected past the Jets goaltender at 13:21.

The lead held up and the two teams went into the second intermission with Vegas ahead 2-1. At this stage, it should be noted that the Jets were 0-7 when trailing heading into the third period while the Golden Knights were 9-0 when leading after 40 minutes.

In the third period, neither team produced a lot of offence, although Vegas probably had the three best scoring chances.

Both teams had 32 shots on goal, but once again, Fleury was one goal better than Hellebuyck. Vegas was zero-for-two on the power play while the Jets were zero-for-four. The Jets outhit Vegas 18-17 while the teams were once again 50-50 in the faceoff circle.

For Winnipeg, head coach Paul Maurice pulled defensemen Ben Chiarot and Toby Enstrom from the lineup and replaced them with Kulikov and Joe Morrow, but it made no difference. The Knights were one goal better.

And now, an expansion team has a place in the 2018 Stanley Cup final. Incredible.