Laine Stars in Victory Over Dallas 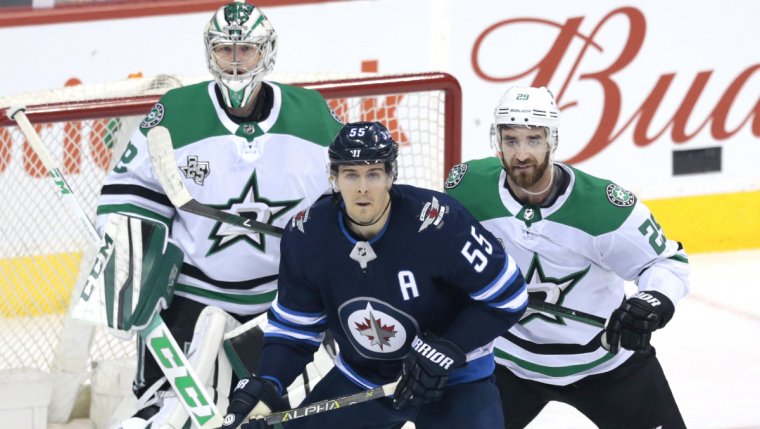 WINNIPEG, MB - It has been an amazing run for Winnipeg Jets’ teenager Patrik Laine. With points in 14-straight NHL games, Laine set the all-time teenage point streak record Thursday against Chicago. In picking up where he left off, the Tampere Terror put together yet another strong performance against his favourite NHL opponent, Dallas, in Sunday’s 4-2 victory.

With two goals on the night and 26 points in his last 15 games, the 19-year-old extended his point streak by yet another game. And it sure didn’t take long.

An interesting first period saw the visiting Stars jump out to an early lead in the shots department, however, the highlight of the first half of the period came from the mouth of the Dallas net. 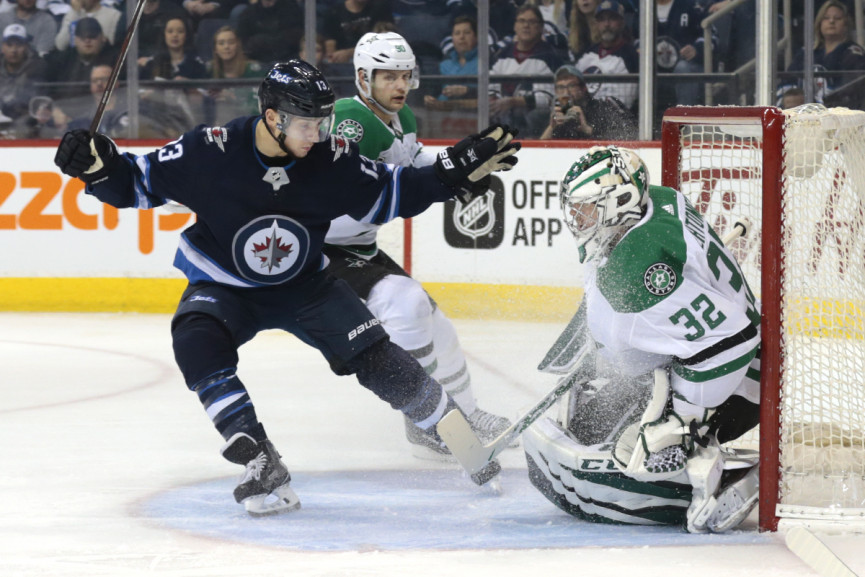 After completely robbing Bryan Little on a three-on-one passing play with a cross-ice sliding glove save, Stars’ netminder Ben Bishop immediately went down in a heap, clutching at his leg. The oft-injured goaltender pulled himself from the game with 10 minutes to go in the first period, in favour of Sunday’s backup Kari Lehtonen.

With the action picking up near the end of the opening frame, Winnipeg captain Blake Wheeler found himself on the receiving end of a thunderous Dan Hamhuis body-check. After scrambling to get back in the play, Stars’ captain Jamie Benn swept Wheeler’s legs out from the 6-foot-5 forward, sending himself directly to the sin bin.

On the ensuing power play, a falling/sliding Wheeler perfectly centered a pass to the red-hot Patrik Laine, who extended his point streak to 15 games, by hammering his 42nd goal of the season past Lehtonen – a buzzer-beater that crossed the goal line with 0.7 seconds remaining. 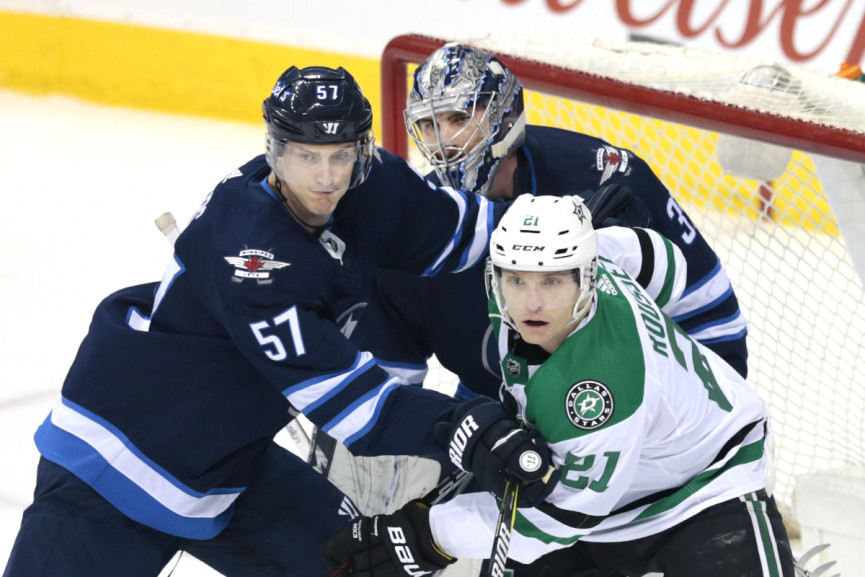 A high-scoring second period saw the Dallas Stars quickly tie the game up just one minute into the middle frame. Following an ugly Laine turnover in the Winnipeg end, Dallas’ Mattias Janmark beat Connor Hellebuyck for his 18th goal of the season.

But only one minute after Janmark’s strike, Ben Chiarot used a Stephen Johns screen to score his second of the season on a wobbly, seeing-eye point shot that found its way through Lehtonen, restoring Winnipeg’s lead.

Patrik Laine then made up for his earlier blunder as he picked up a nifty pass from linemate Nik Ehlers and walked into a snap shot, scoring his second of the game five-hole, and 43rd of the season – tying Alex Ovechkin for the league-lead. The goal was also the 79th goal of Laine’s career – good for third most all-time as a teenager. The highly offensive Finn now only trails Dale Hawerchuk by six goals for second all-time in teenage scoring. 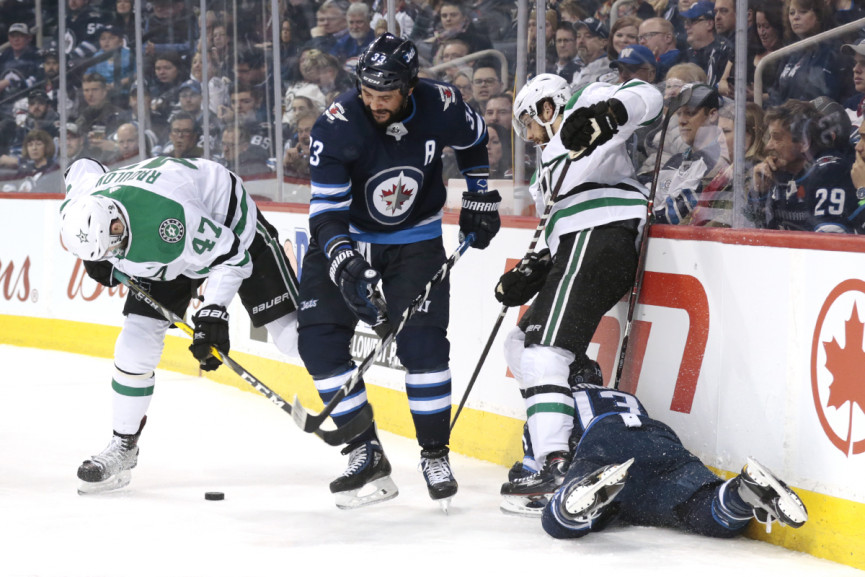 With the Dallas net empty, Laine had a chance at yet another hat trick against the Stars late in the third period, but was unable to find the twine. Wheeler did, however, get the puck into the open net, finishing off Dallas 4-2. In nine career games against the Stars, Laine now owns two hat-tricks, 14 goals and 18 points – by far his best output against any other team.

Jacob Trouba – who was skating in just his second game after returning from injury – engaged with Jamie Benn on his first shift of the third period, and found himself on the receiving end of a high hit. Trouba fell violently to the ice and couldn’t find his legs. The 24-year-old defenceman was eventually pulled to the bench, seemingly concussed.

Tuesday night’s matchup against the Los Angeles Kings from Bell MTS Place has been advertised as ‘Jacob Trouba Bobblehead Night’. Although unable to provide any clear update on Trouba’s status, Jets’ Head Coach Paul Maurice made it clear that his defenceman would be re-evaluated on Monday, stating, “an official diagnosis will come tomorrow.” 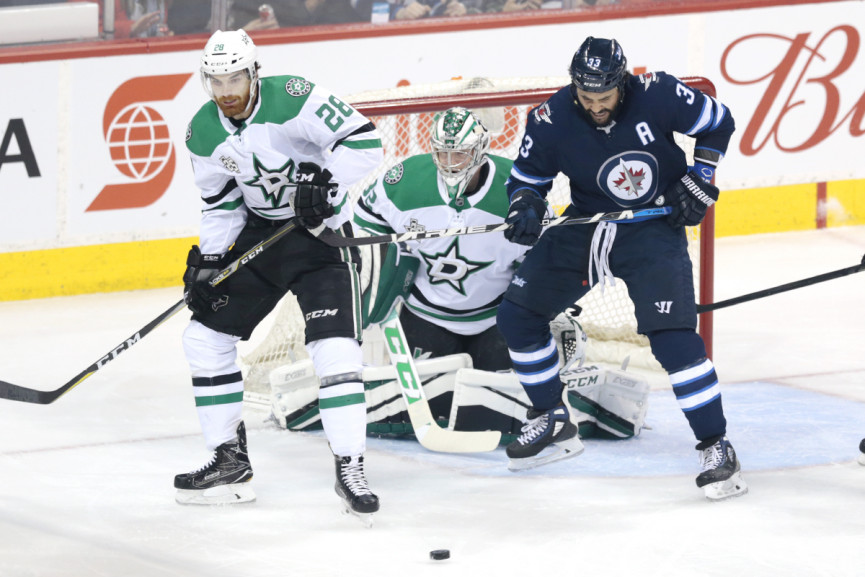 Dallas’ Kari Lehtonen played a decent game in relief of Bishop, but was ultimately charged with the loss Sunday. Following the contest, Stars’ Head Coach Ken Hitchcock announced that Bishop would be re-evaluated in two weeks – a huge blow to Dallas’ playoff chances.

Following Tuesday’s game with the Kings, the Jets will also host the Ducks, Predators and Bruins at home before heading out on the road to take on the Blackhawks and Leafs. Tuesday and Friday’s games can be seen live on TSN3 at 7:00 P.M. Central time.