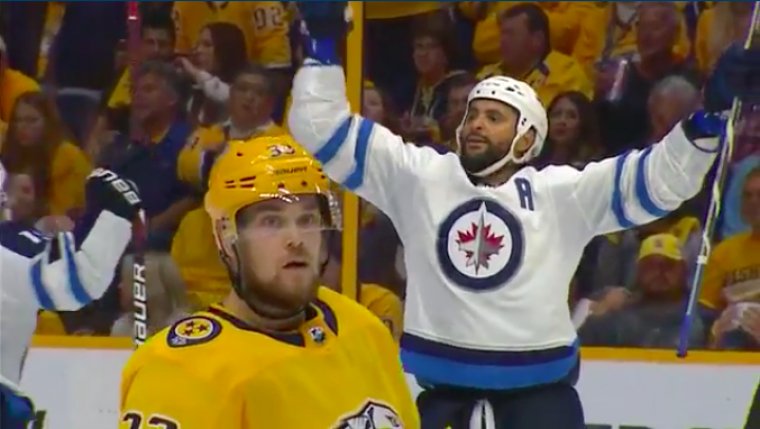 WINNIPEG - Kyle Connor broke out of his slump, the Winnipeg Jets broke the trap and Pekka Rinne just looked broken.

As a result, the Jets will head back to Bell MTS Place with a 3-2 series lead and a chance to call themselves Central Division champions.

Saturday night at Bridgestone Arena in Nashville, Connor had two goals and an assist as the Jets broke out of Nashville’s defensive shell, scored six times on 26 shots against Rinne and beat the Predators 6-2.

With the win, the Jets took a 3-2 lead in the best-of-seven Central Division final (Western Conference semifinal). Game 6 goes Monday night in Winnipeg where the Jets are 13-1-0 in their last 14 games.

He did those things well on Saturday night. The Connor-Mark Scheifele-Blake Wheeler line had three goals and eight points.

After a scoreless first period, both teams turned on the jets.

At 7:44, Patrik Laine ripped a shot that deflected off Paul Stastny and past Pekka Rinne to give the Jets a 1-0 lead. Nikolaj Ehlers made a solid play to get the puck to Laine as Stastny scored his fourth of the post-season.

But Nashville tied it at 11:08 when Yannick Weber scored his first of the playoffs unassisted, but the Jets answered quickly.

Connor scored his second of the game at 17:01 from Wheeler and Byfuglien to make it 4-1, but the Jets made a mess of a power play.

As the Jets pressed, the puck was dumped back to Laine and the point and as he’s done often during the playoffs, he mishandled the puck and Ryan Johansen was able to take it in full stride and head in on Jets netminder Connor Hellebuyck. He fired a shot at Hellebuyck that the Jets netminder misplayed and suddenly it was 4-2.

Leading by two, heading into the third period, the Jets regained their three-goal advantage just 28 seconds into the frame. Kyle Connor made a marvelous play to beat Johansen and then fed the puck to a wide open Scheifele who drilled a shot past Rinne for his ninth of the playoffs. The Jets had a 5-2 lead and then continued to take the play to the Preds.

Mathieu Perreault scored his first playoff goal since April of 2014 – a power play marker -- banging in a rebound off the back boards off a shot from Ehlers at 6:23. That made it 6-2 and Nashville coach Peter Laviolette pulled Rinne and replaced him with backup Juuse Saros.

“We just kept doing what we were doing,” said Scheifele when asked about the Jets six-goal performance in Game 5 after losing Game 4, 2-1. “We kept getting behind their D and kept doing what we’ve been doing all series. Kyle Connor has great character and skill. He’s been awesome, but he just hasn’t been scoring. Tonight he kept shooting and was rewarded.”

It was a tough night on the ice for both teams. The ice at Bridgestone Arena was truly horrible. Players were losing edges and falling all over the place. Apparently there was a concert in the rink on Friday and the ice was negatively affected, but frankly, that ice was embarrassing to the NHL.

Nashville outshot Winnipeg 40-32, but the Jets outshot the Preds 15-9 in the second period and scored four goals. Winnipeg went one-for-four on the power play, while Nashville was zero-for-one. The Predators once again demonstrated that what they do best is cross-check opponents from behind.

The two Connors were the best players on the ice for Winnipeg. Kyle Connor had two goals and an assist while Connor Hellebuyck made 38 saves.

Game 6 in the series goes Monday night at 8:30 p.m. If you don’t have a ticket, the downtown party starts at 6:30 p.m. and the game will be televised on CBC.

“We have the best fans in the league and we know it’s going to be loud,” said Scheifele. “We can’t wait to get back there on Monday.”