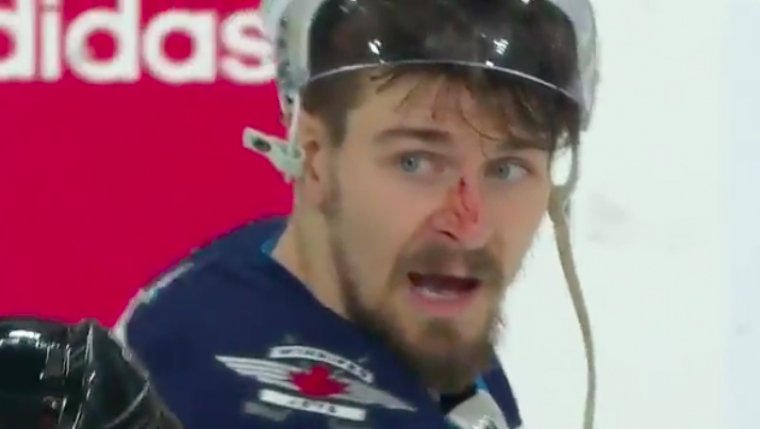 WINNIPEG - Once again, Marc-Andre Fleury was simply too good.

Watch all the highlights from Game 4 in Las Vegas here:

Despite the fact the Winnipeg Jets dominated the game and outshot the Vegas Golden Knights 38-29, the veteran Vegas netminder was more than equal to the task as he led the Knights to a 3-2 victory in Game 4 of the Western Conference final. Reilly Smith scored the eventual winning goal for Vegas as the expansion Knights continue to amaze in front of their Conn Smythe-candidate goaltender.

With the win, the Knights took a 3-1 stranglehold in the best-of-seven series with Game 5 in Winnipeg on Sunday afternoon.

“It was a little bit like the last game, they came hard in the third period,” said Fleury. “But our guys also went hard and we got the winning goal.”

The first period was all Vegas. Even though Winnipeg had both a territorial and possession advantage, it appeared referee Brad Meier was going to make the home side had the lead.

He called a marginal interference call on the Jets’ Tyler Myers after the Knights Ryan Carpenter took a horrible dive right in front of him. The penalty resulted in a power play goal by William Karlsson at 2:25 to give Vegas a 1-0 lead.

Later in the period, the Jets’ Mark Scheifele was cross-checked in the face by Brayden McNabb right in front of Meier. However, the referee either missed it or he had spent the afternoon in the beautiful, newly-renovated sportsbook at the Cosmopolitan placing large wagers on the Knights. He ignored a legitimate four-minute penalty on McNabb and instead gave Scheifele a two-minute cheapie for slashing. It was nothing short of a call for the days of Colton Orr, George Parros, Donald Brashear and Zenon Konopka when you could send a guy out to simply light up the cheap-shot artist who went after your best player.

To their credit, the Jets fought off that penalty and while Winnipeg finished the period outshooting the Knights 10-9, they actually outshot them 10-3 in five-on-five situations. However, for the first 20 minutes, that game belonged to referee Brad Meier and it so angered Jets general manager Kevin Cheveldayoff that he left his spot in the press box and immediately had words with the NHL’s supervisor of officiating Stephen Walkom.

And Cheveldayoff’s conversation worked. In the second period, all three penalties were called against the Knights. Vegas fought off the first one, but the second penalty resulted in a goal by Patrik Laine who one-timed a pass from Dustin Byfuglien past Marc-Andre Fleury at 9:29 to tie the game.

But Vegas proceeded to do what they’ve done throughout the playoffs – they answered back quickly. Just 43 seconds later, after Hellebuyck mishandled the puck beside his goal, Tomas Nosek jammed the disc under the Jets netminder and Vegas had a 2-1 lead. It was Nosek’s first goal in any Stanley Cup playoff series and it took the air out of the Jets sails.

“They’re a team that capitalizes on mistakes,” said Adam Lowry. “We made a mistake and they scored right after we scored and we can’t allow that to happen.”

In the third period, the Jets were handed their fourth straight power just 28 seconds into the frame as McNabb cross-checked Scheifele again and this time the call was made. However, even though the Jets got three solid shots at Fleury, the Vegas netminder did not surrender – at least, not until a few minutes after the power play ended.

Jets defenseman Tyler Myers, who had played well all night, banged a loose puck between the Vegas goaltender’s legs at 5:34 to tie the score at two. Jack Roslovic, another player who has been solid throughout the playoffs, picked up the assist and it was all even. At this point in the third period, the Jets had outshot Vegas 10-0.

However, at 13:02, Dustin Byfuglien fanned on a one-time at the Knights blueline and Reilly Smith took it the other way for Vegas, flew down the left wing and let go a floating wrist shot off the bar past Hellebuyck on the short side to make it 3-2 Knights. It was Vegas’s fourth shot of the period, but it was the dagger.

Winnipeg outshot Vegas 38-29, but once again, Fleury was better than Hellebuyck. Vegas was one-for-two on the power play while the Jets were one-for-four. Vegas outhit the Jets 45-43. The teams were 50-50 in the faceoff circle.

Game 5 in the Western Conference final is slated for Bell MTS Place on Sunday afternoon at 2 p.m. CST. The game will be televised on NBCSN in the United States and Rogers Sportsnet in Canada.