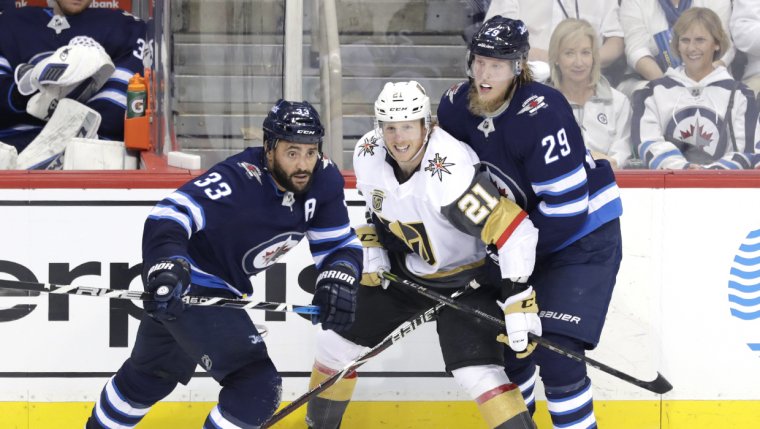 WINNIPEG - If the Winnipeg Jets were to draw up how they wanted to start their Western Conference final series against the Vegas Golden Knights, they would have done exactly what they did on Saturday night, jumping out to a 3-0 lead in front of their home crowd and never looking back as they took a 1-0 series lead with a 4-2 win in Game 1.

The Jets were supposed to be the fatigued team coming into Game 1 of the Western Conference final after having just 48 hours since their Game 7 victory over Nashville on Thursday night, but they looked anything but tired once the puck dropped.

After not scoring a first period goal at Bell MTS Place in their last three contests, it took all of 1:05 for Dustin Byfuglien to send the over 15,000 inside Bell MTS Place –and another 20,000 outside- into a frenzy when he hammered a shot blocker-side on Marc-Andre Fleury.

Vegas, which had five days off after defeating the San Jose Sharks in six games in the second round, were under constant attack from the Jets and five minutes after Byfuglien’s marker, Patrik Laine would double the Jets lead on the power play. Blake Wheeler fed a perfect pass from the right wall across to Laine in the left circle who one-timed a shot past a defenseless Fleury to make it 2-0.

Just 46 seconds later, Joel Armia had a puck bounce off his foot while standing in the crease and it found its way behind a shell-shocked Fleury. The goal was initially waved off for goaltender interference. Paul Maurice used his coach’s challenge and after review and was successful as the call was overturned, giving Winnipeg a 3-0 lead before the midway point of the first period.

Vegas would strike just 35 seconds later when Brayden McNabb beat Connor Hellebuyck with a wrist shot that bounced off Hellebuyck’s left arm and in, cutting the lead to 3-1.

It stayed that way until midway through the second period. Red-hot Mark Scheifele scored his NHL-leading 12th goal of the playoffs, putting the Jets back up by three.

William Karlsson scored his first of the series and 5th of the playoffs on a Vegas power play with just over four minutes left in the second to give Vegas some life, but they were unable to beat Hellebuyck the rest of the night, as the Jets drew first blood in the series with a 4-2 win.

Blake Wheeler finished the night with three assists for Winnipeg and now has an NHL-leading 15 during the post-season. Mark Scheifele registered another two-point night, scoring his NHL-leading 12th goal while adding an assist. It’s the ninth multi-point game for Scheifele in 13 games during the playoffs.

The two clubs will skate Sunday and get set for Game 2 which is set to go on Monday night at Bell MTS Place with a scheduled 7:00pm puck drop.