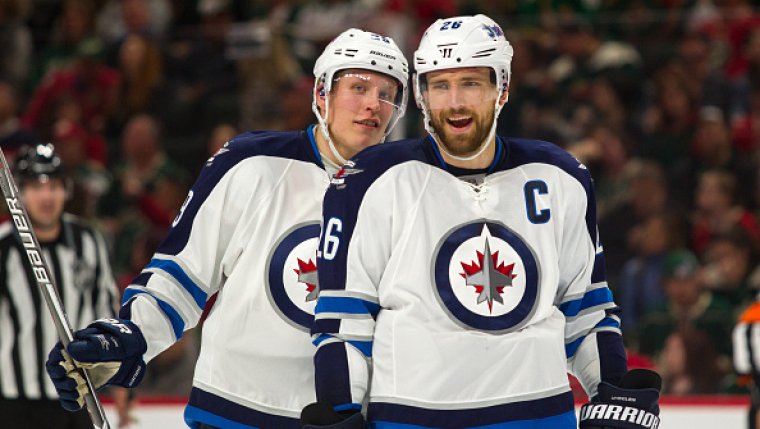 WINNIPEG, MB - It won’t go down as a classic, but it will go down as two more points for the Winnipeg Jets as they hung on for a 6-5 win in Ottawa on Monday night.

The win was the 49th of the season for Winnipeg (49-20-10) who have already booked their spot in the post season and home ice advantage through the first round of the playoffs. The Jets can still mathematically catch Central Division leading Nashville with the win, trailing the Predators by five points with three games remaining.

Blake Wheeler lit the lamp twice on Monday night, giving the captain 22 goals and 89 points on the season, while Andrew Copp, Brandon Tanev, Josh Morrissey, and Mathieu Perreault would round out the scoring for the Jets, who improved to 2-1-0 after the first three games of their four-game road trip.

The Jets opened the scoring early in the first period when Andrew Copp banged home a rebound after Senators goaltender Craig Anderson was unable to corral a Jacob Trouba point shot, giving Winnipeg a 1-0 lead. The line of Copp, Tanev, and Adam Lowry were dangerous all night, and it continued later in the first period when they kept the Senators hemmed in their own zone before Lowry fed Morrissey at the left point who fired a shot that beat Anderson between the legs. It’s the second consecutive game Morrissey has scored after going the previous 44 games without a goal.

With Jets fans still celebrating, Blake Wheeler scored his first of two on the night, snapping a shot that hit the camera inside the net and came out with such speed that the only person on the ice who knew it was in was Anderson. Play continued until the horn sounded, signalling the puck had indeed crossed the line, putting the Jets up 3-0.

Thomas Chabot scored his first of two on the night with 1:34 left in the period, giving the Senators some life heading into the second.

It didn’t take long for the 30th place Senators to get within one. With Ottawa on the power play, Matt Duchene beat Connor Hellebuyck 1:28 into the middle frame, cutting the lead to 3-2.

Ottawa would get a chance to tie the game with another power play just a few minutes later, but Brandon Tanev would score his eighth goal of the season, and third shorthanded, rocketing a shot over the glove of Anderson. It was the eighth shorthanded goal for the Jets this season.

The ping-pong match continued as Chabot and Wheeler exchanged goals 48 seconds apart before the period would run out, giving Winnipeg a 5-3 lead after two.

The pesky Senators would not go away in the third period, once again getting within one with Christian Wolanin firing home his first career NHL goal after finding a loose puck in the slot and ripping a shot over the glove of Hellebuyck.

Mathieu Perreault, who came into the game without a goal in his last 19 games, regained Winnipeg’s two-goal lead with just over five minutes remaining, sliding a shot through the legs of Anderson for his 17th of the season.

The Jets took a couple of late penalties with Ben Chiarot and Trouba taking minors, giving Ottawa a 6-on-3 power play which they would capitalize on. Duchene would score his second of the night, and 200th of his career with 1:05 left to make things interesting, but Winnipeg would hold on for the 6-5 win.

Winnipeg is 8-1-0 in their last nine games, while the Senators have gone the other way, going 1-8-0.

Connor Hellebuyck picked up his 42nd win of the season, tying Andrei Vasilevskiy of Tampa Bay for the NHL lead. The win also tied Hellebuyck for second-most wins by an American-born goaltender.

Patrik Laine was once again held off the scoresheet and has not registered a point in the last seven games for the Jets.

It was the final home game of the season for Ottawa and Senators captain Erik Karlsson, grabbed the game puck on his way off the ice after the game, just adding to the speculation that he may have played his last game in Ottawa. The 27-year-old has one year remaining on his contract and if the Senators are unable to re-sign him this off-season, there’s a good chance he’ll be playing for someone else next season.

Winnipeg wraps up their four-game road trip Tuesday night when they visit the Montreal Canadiens. The Jets will return home for the final two games of the regular season, beginning Thursday against Calgary, before welcoming Chicago to Bell MTS Place to end their regular season schedule on Saturday.