A Night Filled With Emotion 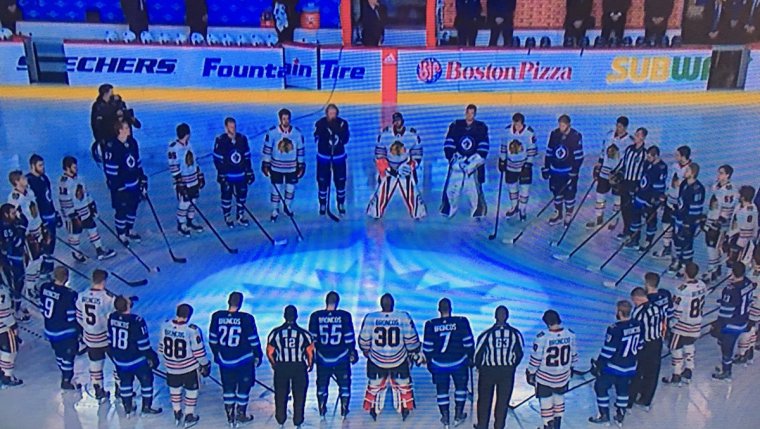 WINNIPEG, MB - The 2017-18 NHL season may have come to a close, but the Winnipeg Jets’ season is a long way from being over. In putting the stamp on an impressive campaign with a 4-1 victory over the visiting Chicago Blackhawks Saturday evening, the Jets cemented their memorable season with official placement in the Stanley Cup Finals, coming in as the hottest team in the league.

It was a somber Saturday night as the entire hockey community of North America grieved the tragedy surrounding a Friday evening highway wreck involving the Humboldt Broncos of the Saskatchewan Junior Hockey League. The accident took the lives of 15 bus occupants – including Humboldt’s team captain and their coach/manager – and sent the remaining 13 travelers to local hospitals with injuries, some life-threatening.

Prior to the anthems, the players of the Blackhawks and Jets met at centre ice and stood interspersed in a circle as all in attendance at Bell MTS Place observed a moment of silence. The two teams also played with the word ‘Broncos’ serving as the individual players’ name bars Saturday evening. Multiple "Let

With in-arena giveaways throughout the course of Saturday’s game, and the promise of multiple playoff street parties, the long-awaited anticipation of playoff hockey in Winnipeg was at an all-time high. Taking on the lowly Blackhawks who will miss the Stanley Cup Playoffs for the first time since the 2007-08 season.

It didn’t take long for Dustin Byfuglien and the Winnipeg Jets to make Chicago pay, following a slew of first period Blackhawk penalties. In needing just 13 seconds of a five-on-three two-man advantage, Byfuglien hammered a one-timer past Hawks’ netminder Jeff Glass, on a great setup by Jets’ captain Blake Wheeler for Big Buff’s 8th goal of the season. Scoring with five minutes left in the first period, Byfuglien’s running mates hung onto the 1-0 lead through 20 minutes of play. Winnipeg outshot Chicago 11-6 in the opening frame.

An eventful second period saw the Jets jump ahead 4-1 on three quick strikes in the early going. After Chicago’s Brent Seabrook whiffed on a point shot, Winnipeg’s rookie goal-scoring sensation Kyle Connor picked up the loose puck at his own blueline and carried it the length of the ice before burying his rookie-leading 31st of the season past Glass, on an excellent deke, just 34 seconds in.

Andrew Copp then took over the scoresheet for a few minutes, picking up his eighth and ninth goals of the season, before Seabrook atoned for his earlier mistake by wiring home his seventh of the year past Connor Hellebuyck. The Jets continued to outshoot the Blackhawks in the middle frame, boosting their lead to 26-17 after two periods of play.

Immediately following the second period, the Winnipeg Jets held their annual awards presentation, with three players receiving recognition for the work on and off the ice. Connor Hellebuyck received the Three Stars Award for appearing the most in the annual post-game tradition. Matt Hendricks picked up the Community Service Award, while former Atlanta Thrasher Toby Enstrom was presented with the Dan Snyder Memorial Award.

The Winnipeg Jets recognized Winnipeg-born Patrick Sharp midway through the third period for skating in his final NHL game Saturday. Fittingly the contest came in Sharp's hometown. He finished his career with 287 goals, 620 points and three Stanley Cups in 938 career games.

Sharp told Game On Magazine that he is anticipating great things from the Jets in their upcoming playoff run.

“I’m a hawks fan, but I was born here in Winnipeg," he said. "There’s just something about playing in Canada and the Canadian fanbase. This building is going to be loud next week with the whiteout, being as loud as they can get supporting their team.” The third period went goalless, with the Jets' final game of the season ending 4-1.

Wheeler finished the season with 23 goals, and 68 assists for 91 points in 81 games played. Patrik Laine – Winnipeg’s second-highest point-getter finished the year with 69 points – one point more than Wheeler’s assist total.

Connor Hellebuyck tied the NHL’s all-time home wins record set by Wayne Stephenson in 1975 with his 30th home victory of the 2017-18 hockey season. Hellebuyck finished the year with a record of 44-11-9, helping the Jets finish the season 52-20-10.

The Jets finished the season with an impressive record of 52-20-10 – good for 114 points and a berth in the Stanley Cup Playoffs. Winnipeg will face off against Central Division rival Minnesota Wild in the opening round of the 2017-18 postseason. The series will kick off from Winnipeg’s Bell MTS Place later this week - most likely featuring Wednesday and Friday contests with the Wild. The Jets took three of four games from Minnesota this past season.