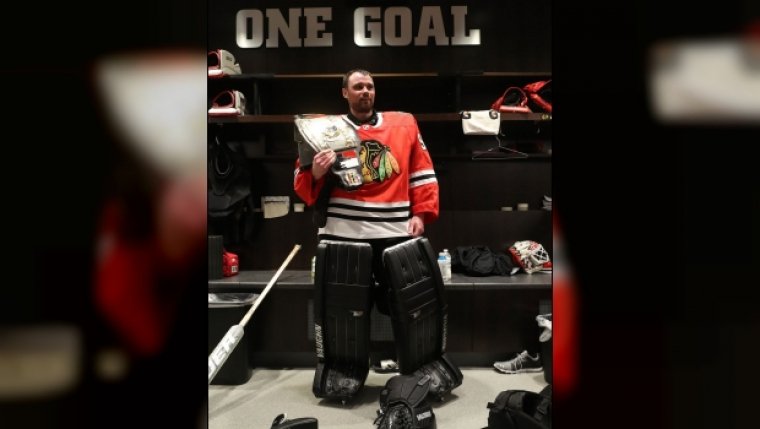 WINNIPEG, MB - It was a night to remember for the Chicago Blackhawks, but a night to forget for the Winnipeg Jets.

On paper this game didn’t have much of a story line. The Jets booked their spot in the post-season earlier this week, while the Blackhawks have been eliminated from playoff contention for a while. By the end of the night, the game was filled with storylines.

In a night that can only be described as bizarre, a 36-year-old accountant named Scott Foster, who plays beer-league hockey in Chicago, was called into action for the Blackhawks in the third period and the accountant was money the rest of the way, not allowing a goal in a 6-2 win over the Jets on Thursday night, living the dream of every beer-leaguer who hopes to be the next call up to the big leagues.

The Blackhawks goal crease has seen its share of netminders this season, but nobody saw this coming. Anton Forsberg was scheduled to start but was injured pregame, forcing Colin Delia into action to make his NHL debut. Delia stopped 22-of-24 shots in his debut, but cramped up with 14 minutes left in the third period, making way for Foster. Blackhawks head coach Joel Quenneville was seen laughing and sending words of encouragement to Foster on his way onto the ice, and the netminder didn’t disappoint, stopping all seven shots he faced.

It was a storybook ending for Foster, who played four years at Western Michigan University from 2002-06. He was named first star, had over 21,000 fans at the United Centre chanting his name, and had saves on Tyler Myers, Paul Stastny in close, and Dustin Byfuglien with his glove, just to name a few.

“A few hours ago, I was sitting on the computer typing on a 10-key, and now I’m standing in front of you guys having just finished 14½ minutes of NHL hockey,” Foster told reporters after the game.

The NHL adjusted its rules last summer to mandate that teams have an emergency goalie present for all home games ready to fill in for either team, but they are almost never used. They’re usually in the press box, enjoying a free meal while watching, and possibly wishing, for an opportunity like this.

Brent Seabrook, who was honored before the game for playing in his 1000th game, had the spotlight stolen on this night.

"[Patrick Sharp] was laughing about it, saying it just sums up my career in a nutshell," Seabrook told reporters after the game. "My night and Scottie comes in and steals the spotlight. It was great. It was pretty cool to see him go in there."

As for the game, Chicago scored early and never looked back.

Patrick Kane opened the scoring, moving down the left side and sliding a shot through the legs of Jets goaltender Eric Comrie, who was making his third start of the season, to give the Blackhawks a 1-0 lead.

Brandon Saad would double the lead after Joe Morrow mishandled the puck at the side of the Jets net and Kane gathered the puck and found Saad in front who out-waited Comrie who had come out to challenge and slid a backhand behind the Jets netminder to put the Blackhawks up by two.

Tomas Jurco would net a pair of goals to give the Blackhawks a 4-0 lead before the Jets would finally find a way to beat Delia. Dustin Byfuglien sent a shot towards the net that was tipped by Bryan Little and past Delia. The goal was Little’s 200th NHL goal.

The celebration was short-lived as Eric Gustafsson was sent in alone and went upstairs blocker-side on Comrie just three-minutes later to make it 5-1.

Winnipeg would add a goal late after a great effort from Kyle Connor who took the puck behind the Blackhawks net and centered a pass to Mark Scheifele who one-timed a shot past Delia to cut the lead to 5-2 after two.

Alex DeBrincat rounded out the scoring with a cannon over the right arm of Comrie, who stopped 36-of-42 shots on the night, giving the Blackhawks the 6-2 win.

The loss snapped a six-game winning streak for the Jets, who travel to Toronto to face the Maple Leafs on Saturday night in the second game of their four-game road trip.