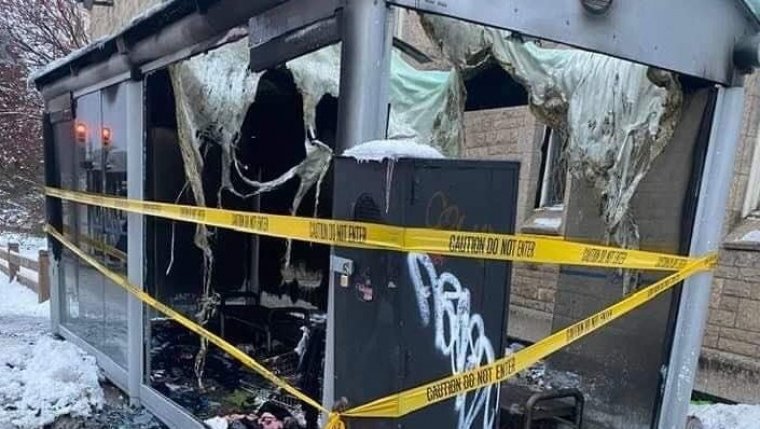 WINNIPEG - The City of Winnipeg says nobody was injured by a fire that ripped through a downtown bus shelter that had been filled with bedding and debris amid snowy conditions as the number of homeless Winnipeggers continues to grow.

The structure near the corner of Osborne St. and Broadway was extensively damaged Monday afternoon, with much of the interior gutted before crews extinguished the blaze and wrapped the exterior in caution tape.

The Winnipeg Fire Paramedic Service says they were dispatched to the area just before 3 to extinguish the blaze, and photos of the shelter show it contained blankets, a shopping cart, and lots of garbage inside, indicating it had been used as a shelter.

West Broadway Bear Clan Patrol says the fire had been lit by a homeless resident as a way to stay warm following this past week’s arrival of winter weather. Bear Clan volunteers say they had just visited the same bus shelter this past Friday to provide food, winter clothing, and personal hygiene supplies.

This year, Winnipeg moved to ban camping and fires under its bridges after an increase in fire incidents grew from a total of 56 last year to 96 by this past September. Advocates for homeless Winnipeggers say there are an estimated 170 people living in dozens of camps throughout the city.