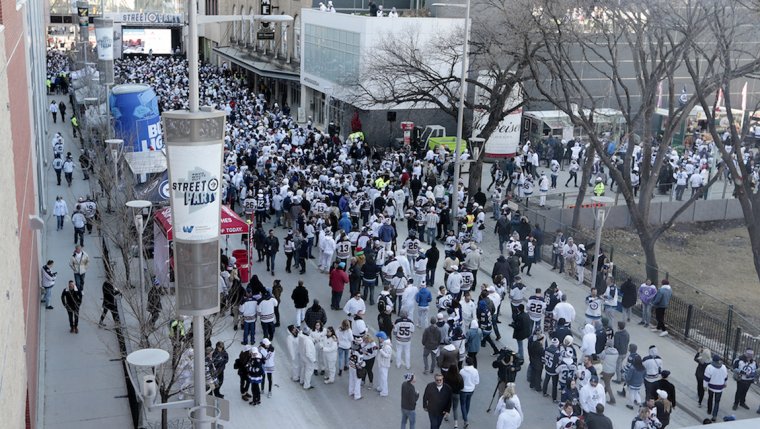 WINNIPEG, MB - Here we grow again, the Winnipeg Whiteout Street Party is once again being expanded. The next, bigger, Whiteout Party starts at 4:30 PM this Friday.

The first street party was for game one on April 11. That party saw Donald Street between Portage and Graham closed off for party goers.

There are many reports suggesting an estimated 9,000 people attended the first street party, but the space was only designed for 5,500, so the party area had to grow for Game 2.

That's still not enough for Winnipeg.

The street party's capacity will be expanded again and this time it will grow by over 50 per cent for Game 5 this Friday, with the party pushing right onto Graham Avenue this time.

Organizers are hoping the third expansion will accommodate about 15,000 people, close to what the arena holds, and a fifth screen is being added so nobody misses the action.

City of Winnipeg has said that southbound Donald Street will be closed to vehicle traffic between Portage Avenue and St. Mary Avenue from 10:00 AM Friday to 1:00 AM Saturday.

City buses will be rerouted off of Graham Avenue from Carlton Street to Smith Street starting Friday at 2:30 PM until service ends.

With a series lead of 3-1, temperatures well into the double digits, here's the forecast, and double the party space Friday could be record breaking on so many levels.