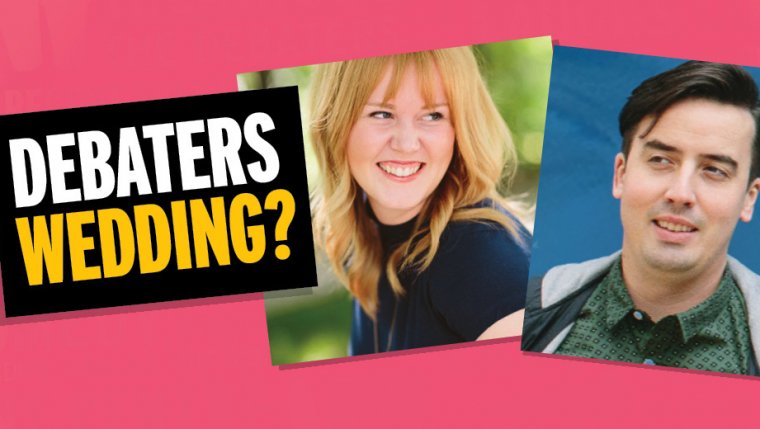 WINNIPEG, MB - The Winnipeg Comedy Festival wrapped up with more than 9,800 people attending the various shows and the Festival may have even made history this weekend, with the VERY FIRST REAL WEDDING to ever take place onstage at a comedy festival!

All those who attended The Debaters last Sunday were in for a treat when Winnipeg comedians Tim Gray and Dana Smith debated about getting married. In the end, Tim won the debate, resulting in Dana having to marry him right after the show.

Festival officials said it's all good because the were already dating, so they actually didn’t mind getting married. The couple were married right there on-stage at the end of The Debaters, with the wedding ceremony officiated by the Winnipeg Comedy Festival’s own Artistic Director, Lara Rae.

“It was an honour to marry Tim and Dana. I’ve known them both for many years, and they are a lovely couple,” says Lara. “It’s a good thing that Tim won the debate, too, because we bought a gigantic wedding cake, and if they didn’t end up getting married, then the WCF staff would be eating that cake for many weeks to come.”

The wedding ceremony was followed by a reception attended by their close friends and family, Winnipeg Comedy Festival staff and volunteers, all the comics who were still in town on Sunday, and, well, anyone else who happened to be at Club Regent Event Centre that day.