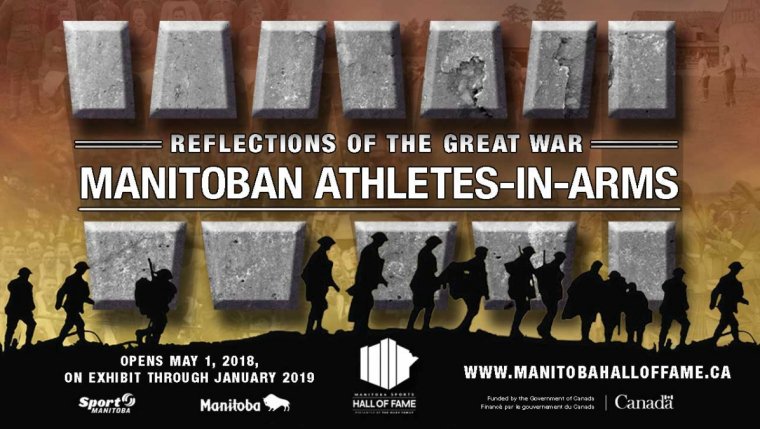 WINNIPEG - In celebration of the 100th anniversary of the end of the First World War, the Manitoba Sports Hall of Fame opened an historic new exhibit today featuring Manitoba’s athletes and sports teams, or the battalions to which they belonged, during the war.

Using information from the digitized First World War personnel records in concert with archival materials such as badges, medals, articles of clothing and uniforms, and sports equipment, the curators designed Reflections of the Great War: Manitoban Athletes-In-Arms to showcase the incredible efforts of our honoured members and other athletes in the early 20th century.

"This collection, with some artefacts that are over 100 years old, is truly remarkable," says Jeff Hnatiuk, President and CEO of Sport Manitoba. "We're proud to showcase and celebrate Manitoba's rich sport history with this exhibit with special attention to our athletes and teams who fought in the Great War."

Many of our athletes fought at the Somme, Vimy Ridge, Passchendaele, and Amiens, and some were awarded the 1915 Star for seeing action so early in the war. Many teams served together on the same unit, including the Allan-Cup-winning hockey teams the 1911-12 Winnipeg Victorias, the 1913 Winnipegs, the 1916 61st overseas battalion, and members of the Winnipeg Falcons whose surviving members would go on to win the Allan Cup and the Olympic Gold in 1920.

"This has been a fascinating exhibit to build and develop. So many military organizations and their heritage institutions have been so generous with their artefacts and archives, their knowledge and expertise, and their support of the new exhibit. The subject matter of the Great War and the Manitoban athletes who served will attract a new demographic of visitors to the Hall of Fame and we are thrilled to welcome them," says Rick Brownlee, Sport Manitoba's Sport Heritage Manager.

With Files From Sport Manitoba