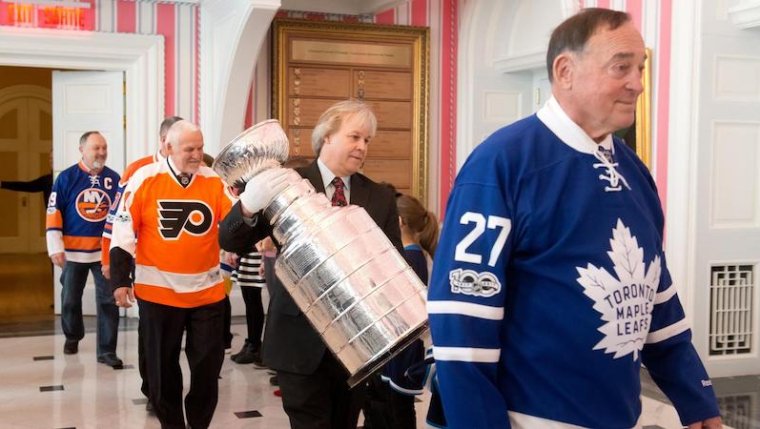 WINNIPEG - I had the privilege recently of enjoying a dinner with Frank Mahovlich, the former hockey player and senator, who regaled us with stories of his past. One of them was about his recent trip (2017) to Moscow to have dinner with Putin – the occasion was a celebration of the 45th anniversary of the Canada-Russia hockey series of 1972. Frank, who was one of the team co-captains, was there with guys like the Russian goaltender, Vladislav Tretiak, and others of that era.

I remember the 1972 series very well. I was an avid hockey fan and a fierce Canadian even in those days and I looked forward to our NHL gang whooping those Soviets in our national game. The series was filled with ups and downs, bitterness and moments of torment followed by wild joy whenever we won.

I ended up in hospital for an operation during the series, so I missed most of the games (including the Game 3, played in Winnipeg which tied 4-4), although I have a foggy memory of coming out of anesthesia and catching a few minutes of play, ignoring my anxious family who were gathered around.

The day I came out of the hospital (they used to keep us in for ages) was the day of game 8 in Moscow. After dropping me at home, Glenn left to go back to work. My small daughter, Shauna, who was five at the time, was my only companion as I tuned into the final game.

It was a nail biter that looked to end up in a tie, but in the final minute of play, a miracle happened. Here’s how it was remembered by Henderson as presented by Wikipedia:

In the final minute of play, with Phil Esposito, Yvan Cournoyer and Peter Mahovlich [Frank’s bother also played in the series] out on the ice, Paul Henderson stood up at the bench and called Mahovlich off the ice as he was skating by.

"I jumped on the ice and rushed straight for their net. I had this strange feeling that I could score the winning goal,” recalls Henderson.

Cournoyer picked up a puck that had been passed around the boards by the Soviets in a clearing attempt. He missed Henderson with a pass, but two Soviets mishandled the puck in the corner and Esposito shot the puck on Tretiak.

Henderson, who had fallen behind the net, got up and went to the front of the net where he was uncovered. Henderson recovered the rebound of Esposito's shot, shot the puck and was stopped, but recovered the rebound. With Tretiak down, he put the puck past Tretiak with only 34 seconds to play. Foster Hewitt's voice rose in excitement as he called the winning goal:

“Cournoyer has it on that wing. Here's a shot. Henderson made a wild stab for it and fell. Here's another shot. Right in front. They score! Henderson has scored for Canada!”

There I was, beside myself with joy and no way to express it. I got Shauna to jump up and down to celebrate for me. She must have thought I had come home deranged!

There is no expressing to a young audience today what that win meant to Canadians or even how we felt about our hockey heroes, whose names were one everyone’s lips, no matter how little we might know about the game in general.

Frank also told us of being a young hockey player, up against Rocket Richard for the first time. His job was to shadow the Rocket. “You stay on him,” said the coach. When you get hold of him, don’t let him go.”

Frank took this advice to heart and sure enough, he soon had the Rocket in his grasp, his arms around him, holding him very tightly. “He tried to elbow me out of the way,” said Frank. “But I held on tight. So he screwed his body around until his nose was just about touching mine and he said in a very firm voice, ‘Let go, Kid.’ I gazed into his eyes and said, ‘Yes Mr. Richard.’”

I love that image of the future superstar yielding to his hero, in spite of strict instructions from the top!

For those of you too young to remember, Frank Mahovlich was one of the greatest hockey players of all times and, in 2017, was named one of the top 100 Greatest NHL Players. He will turn 81 this coming January 10 and is still tall, erect and full of life.

During his visit to Moscow last year, Putin became very expansive--lots of vodka was imbibed–and the guests were given an underground tour of the Kremlin. Here they were shown vast stores of precious metals and jewels. There were big boulders of gold, said Frank, and heaps of emeralds and rubies and diamonds. It was mind-boggling.

That got me thinking: what good is that stuff anymore? Does it have any real intrinsic value? Do you collect diamonds and gold now? Our real wealth is in knowledge and the ability to use it. Stuff, material things, is just stuff that we desire for a while, then tire of and replace with new stuff. If Russia is really relying on its stores of obsolete minerals as the basis for wealth, then I think they are in for a sad surprise some day in the not-too-distant future.

But then, maybe I’m just showing my age. After all, as they say, you can’t take it with you, so what the heck is the point? What is wonderful, though, is meeting a guy like Frank Mahovlich and hearing his stories.