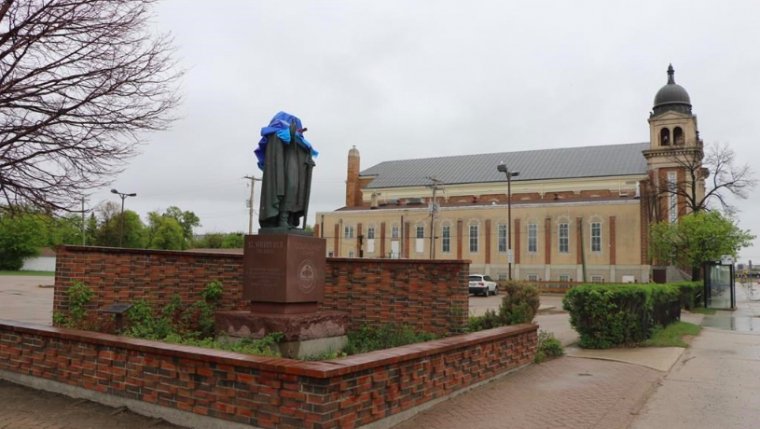 WINNIPEG — Members of a Winnipeg church are praying that the head of a bronze statue created by a well−known sculptor and blessed by a pope will be returned.

The work depicting St. Volodymyr was decapitated outside the Cathedral of Sts. Vladimir and Olga early Tuesday. A cross−like symbol on a Ukrainian coat of arms was also stolen.

"At this point we pray that those who did the severe damage to the statue return the head and cross, no questions asked," a statement from the church said Friday.

The vandalism has created a financial burden for the parish, the church said, adding it’s not known how much it will cost to repair.

Parish executives met Friday to figure out next steps. For now, they said they are hoping for the return of the head and the restoration of the statue.

Art dealer David Loch worked with Mol for decades and considered him a close friend.

"Leo would be terribly distraught if he was still around thinking that this could have actually happened," Loch said in an interview from Toronto.

"And of course, if Leo was here, he could make another head and he could put the head back on the shoulders. But he’s not here."

The website for the Leo Mol Sculpture Garden in Winnipeg said Mol used a special method to create his sculptures, modeling clay on a structure of rebar and wood. He then covered it in liquid rubber to form a mould.

Loch said the moulds were all destroyed after Mol’s death.

"There’s no moulds. No ways to replicate it. So I’m just praying that if they tossed it in the river, they know where they tossed it," he said.

Police said that it’s a unique crime, and they aren’t aware of any motive.

"It is not uncommon for thieves to target statues or plaques for scrap metal," Const. Jay Murray said in an email. "Buyers of scrap metal need to be aware that it can be a criminal offence to possess stolen property."

Loch said if money was the motivation, the head thief will be sorely disappointed. The statue is hollow, so it’s head is likely not worth more than $10 as scrap.

However, the statue itself is priceless, Loch added. He’s offered to pay to have the head restored to the statue. He said someone with the right expertise could weld it back on.

"When you see it was vandalized you think what was the point? Why would someone do that?" Loch said. "Of course we may not get the answer but the only answer that matters to me is we get the head back."