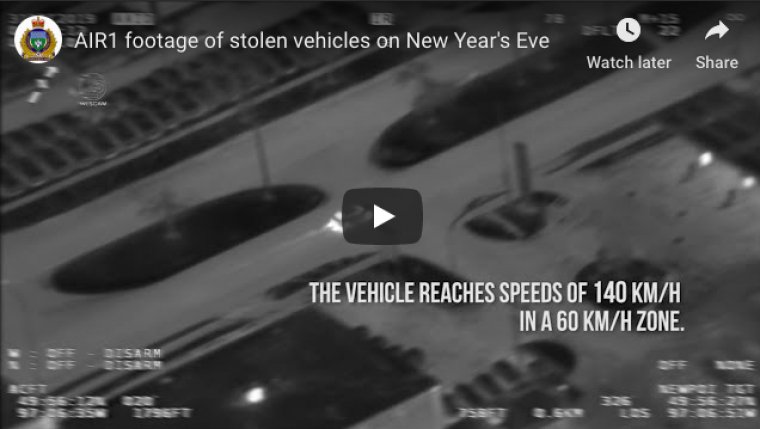 Police said On December 31 shortly after midnight a a Patrol Unit spotted a stolen car travelling in the area of Charles Street and College Avenue. The vehicle had been taken from the area of Elie, Manitoba the day before.

Officers followed the stolen vehicle and successfully used a tire deflation device (“Stop Stick”). The car then fled at a high rate of speed and was tracked by AIR1 as ground units disengaged.

The stolen vehicle reached speeds of approximately 140 km/h in a 60 km/h zone before it slowed and became stuck on a median on Main Street in front of the Kildonan Park Golf Course. The driver, a 26-year-old, was taken into custody after a brief chase on foot.

Mitchell Grant David Giasson, from Winnipeg, has been charged with:

- Fail to Comply with Condition of Release Order

A second passenger, a woman, was arrested and released without charges.

Then shortly after 1:00AM a Patrol unit saw another stolen car in the 400 block of Selkirk Avenue. The vehicle was stolen from the West Alexander area overnight between December 28 and 29th and had already been involved in a pursuit during the evening of December 30th.

Officers followed the stolen vehicle and were unsuccessful in deploying a tire deflation device. The car then took off at a high rate of speed and was tracked by AIR1.

The stolen vehicle drove erratically through a residential area, failing to yield for numerous stop signs. The car turned around in the 700 block of Machray Avenue and drove towards two police vehicles, causing a slow-speed head-on collision. The driver, a woman, was arrested.

Marissa Simone Eveleigh, a 24-year-old woman from Winnipeg, has been charged with:

- Fail to Comply with Condition of Release Order