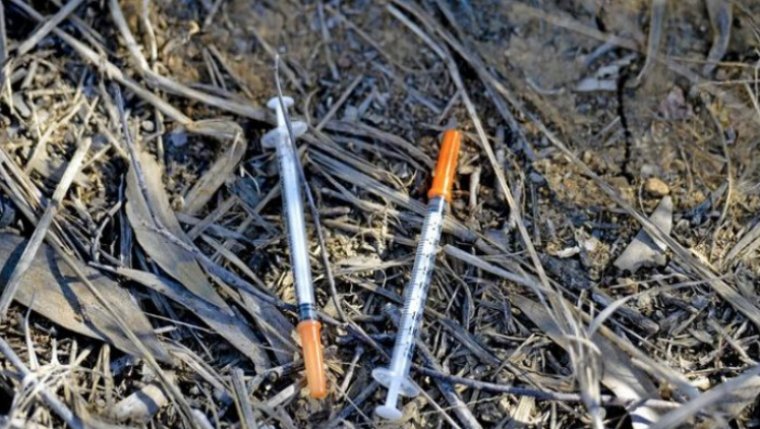 Subsequent to our podcasts on the outdated WRHA needle exchange program and follow up about businesses being used as dumping grounds , we asked the good people of River Heights if they had comments about finding used needles.

Already overrun with bike theft and garage/car break-ins caused in great measure by meth users, discarded sharps were noted across the neighborhood including bridges, parks, lawns, and bus stops.

"Drug paraphernalia has been found under the Footbridge at Sir John Franklin Park off Wellington Crescent and needles have been found behind one residence that I know of. "

"Yes we did find drug paraphernalia at Brock/Corydon play ground."

"I too found some right out on my boulevard last year."

"My husband has found them in the “Pan Am Forest” (yes, they call the few spruce trees by the Pan Am pool a forest) "

" I found a syringe in the bus stop at Cambridge and Mathers last year. Called it in to 311."

(When asked what instructions 311 gave, the resident explained) ... “call it in” was a bit misleading. I sent them a twitter message with picture and bus stop number. They said that they would send someone to dispose of it. I was on my way to work so not sure how long it took for them to pick up."

At least one hotspot was identified on a popular stretch of Corydon:

"There has been needles (sometimes including the ties & the blue vessels that contain water) quite often around a building at (Corydon between Stafford & Wentworth). "

"Few years back, before we built our garage, I was parked out front and had forgotten to lock my doors. In the morning the passenger door was not closed completely, some things were looked through but nothing seemed to be taken including CDs and 2 bottles of wine I had left accidentally in the backseat in a bag...but found on the passenger seat was an unused needle (City Police came and picked it up). Shortly after that incident, when the garage was just built, found a used needle behind the back fence."

Finally, although finding needles isn't mentioned, this resident sums up the frustration of River Heights because of meth use propelling criminals into their neighborhood:

Oct. 10 after their vehicle was rifled:"Sooo tired of living this way always on the alert."