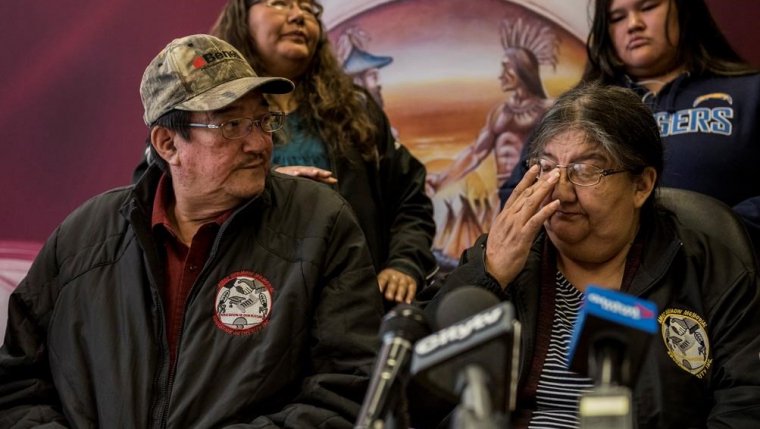 WINNIPEG — The father of a woman whose body was discovered at a recycling depot says the family is devastated by her death.

Mary Madeline Yellowback, 33, was a mother of six from God’s River, Man., about 600 kilometres northeast of Winnipeg.

Police say there was no obvious cause of death, but the homicide unit is investigating. They believe Yellowback’s body, which was discovered Friday, was brought to the Winnipeg depot from another location.

Her father, Rex Ross, said the loss has hit the family hard.

"I never realized that it would be me that would lose a daughter through this tragic event ... her life being cut short," he said Tuesday after police publicly identified Yellowback.

Yellowback was last seen in downtown Winnipeg last Thursday evening. She was wearing jeans and a grey hooded sweatshirt with a red "R" on the front. Police are asking anyone with information to come forward.

Ross said he took some relief in his daughter’s body having been found. Other Indigenous families do not get that closure, he said.

Yellowback’s death comes as the national inquiry into missing and murdered Indigenous women is holding hearings in the Manitoba capital.

"When we found out today, at the inquiry ... we had a moment of silence, and again that same thought came — why, why is it still happening every week?" Michele Audette, one of the inquiry commissioners, said at a news conference where she joined Yellowback’s family and Indigenous leaders from northern Manitoba.

"Every week ... we have to have that moment of silence because we heard through the news (about) somebody gone missing. Somebody dead. Somebody is disappeared."

Manitoba Keewatinowi Okimakanak, which represents northern Manitoba First Nations, said Yellowback was a home−care worker with five children between three and 13. She had another child who was killed in a car accident.

Yellowback was a cousin of Sunshine Wood, also from God’s River, who was last seen at the age of 16 at a hotel in downtown Winnipeg in 2004.

Ross said his daughter was loved by her family and people in her close−knit community. She had returned to Winnipeg about three weeks ago.