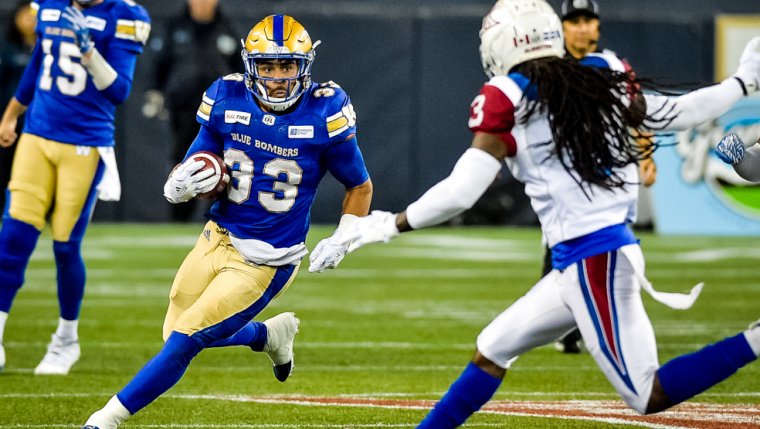 On a four-game losing streak, the Bombers were coming off a bye week and about to face the last-place Montreal Alouettes. A win, and they would get themselves back in the playoff picture, a loss, and well, let’s not even go there.

Luckily for the Bombers, the four-game slide ended with a 31-14 win, and you could hear the collective sigh from the Bomber faithful at Investors Group Field.

The win may have come at a cost though, as Andrew Harris, Adam Bighill, and Nic Demski all left the game with injuries and did not return.

Quarterback Matt Nichols, who has been under scrutiny for the past several weeks, had his best game in over a month, finishing the night going 18-for-25 for 256 yards and a touchdown. And even more importantly, no interceptions.

Harris left the game in the second quarter after rushing for 44 yards on seven carries, surpassing the 1,000 yard mark (1,028) for the fourth time in his career.

The game won’t go down as a Picasso, but it was a full-team win with both sides of the ball contributing. The offence, led by Nichols, didn’t rack up the yards, finishing with 334 yards of net offence, but the decision making and timely catches were the best they’ve been in the last five games. The defense held Johnny Manziel and the Alouettes offence to just 312 total yards and sacked Manziel five times.

Winnipeg got off to a great start in front of the home crowd, scoring on their first two possessions. Justin Medlock connected on a 50-yard field goal to open the scoring and Andrew Harris picked up his 10th touchdown of the season with a 10 yard reception to put the Bombers up 10-0.

Boris Bede would cut the lead to 10-3 with a 47-yard field goal, but that was answered by Justin Medlock who connected on his second of three on the night, this time from 43-yards. After another Bede field goal, Winnipeg scored their second major of the half, with Kienan LaFrance running in from seven yards out to give the Bombers a 20-6 lead at the half.

Montreal tried their best to get back into the game in the second half, and Manziel drove the Alouettes to the Bombers two-yard line before Antonio Pipkin ran it in to once again cut the lead to 20-13.

But in what could have been the turning point in the game, a great drive by the Bomber offence in the fourth quarter, killing off 5:02 of the clock before Medlock connected on his third field goal of the game to make it a two-score game with just over three minutes to go, was too much to overcome for Montreal, who falls to 3-7 on the season.

Marcus Sayles intercepted Manziel on Montreal’s final push to get back in the game, and Chris Streveler scored on a quarterback sneak in the final minute to put the Bombers back in the win column, improving their record to 6-7.

The schedule doesn’t get any easier with Winnipeg heading to Edmonton to face Mike Reilly and the Edmonton Eskimos next Saturday.

Defensive lineman Craig Roh had his best game in a Bomber uniform, finishing the night with a game-high seven tackles, and for good measure he sacked Manziel three times.

Three key pieces of the Bombers left the game with injuries and did not return. Andrew Harris (Upper Body), Adam Bighill (Upper Body) and Nic Demski.