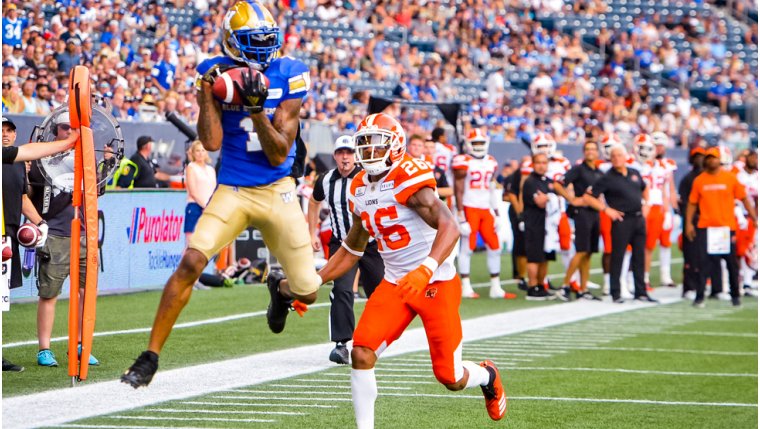 WINNIPEG - Big players turn up in big games, and the Winnipeg Blue Bombers were led by two of the best in the CFL, with Andrew Harris and Adam Bighill both making big impacts in a 41-19 win over the B.C Lions at Investors Group Field on Saturday night. 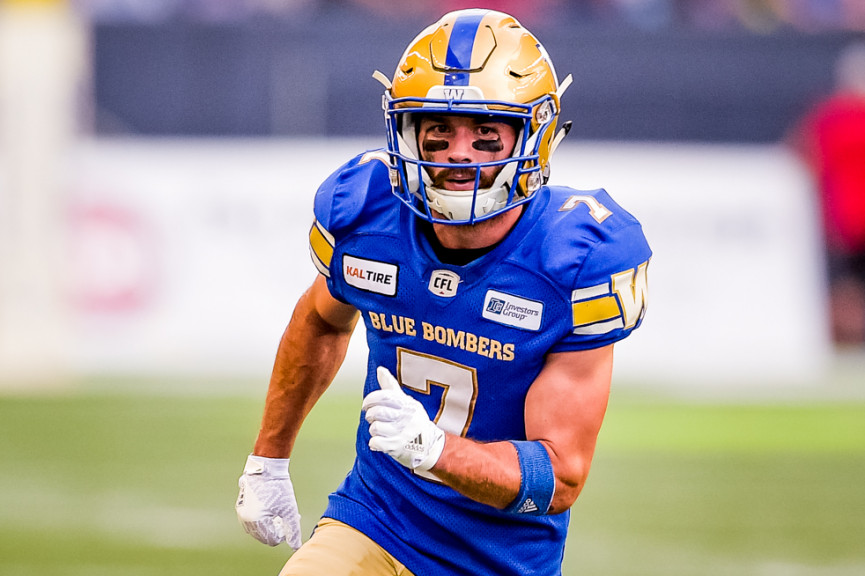 Bighill, who played with the B.C Lions for six seasons (2011-16), made his first career start against his former team and didn’t disappoint. The 29-year-old middle linebacker finished the night with 10 tackles and a pair of interceptions, including a 54-yard pick-six for his first CFL touchdown in the win. 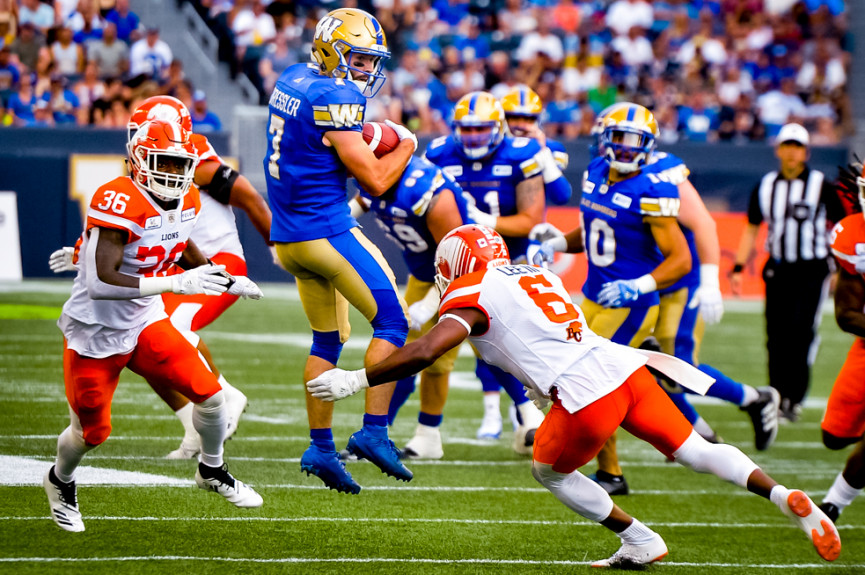 Harris broke the 100-yards rushing mark for the first time this season, finishing with 109 yards on 12 carries and a touchdown.

Quarterback Matt Nichols made his first start of the season for the Bombers after returning from injury, and after looking a little rusty to start the game, finished the night with 162 yards and a touchdown. Rookie quarterback Chris Streveler also saw action on Saturday night as the Bombers went with a 1-2 punch at the pivot position. Streveler used his speed to move the ball downfield in the first quarter, including a 26-yard dash that eventually led to Nichols connecting with Darvin Adams in the end zone to put the Bombers up 7-3. 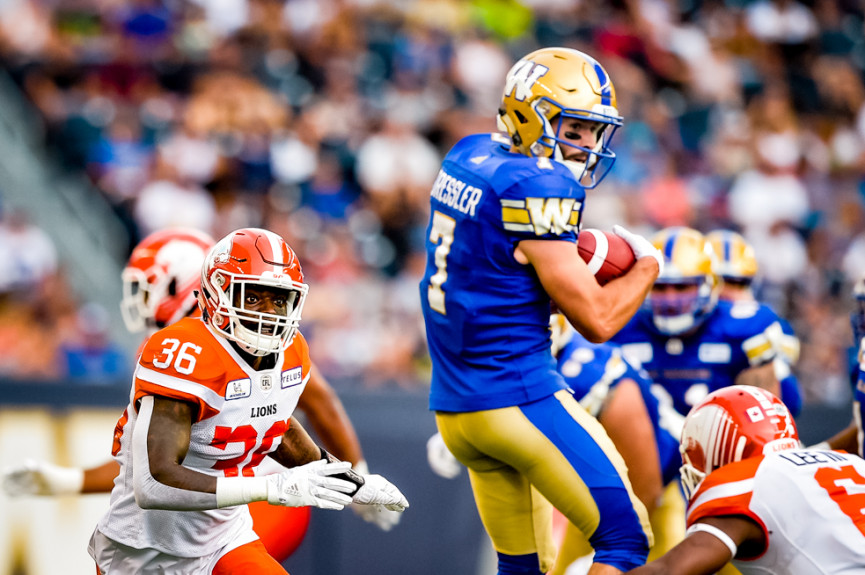 Before the quarter ran out, Bighill picked up his first of two interceptions when he picked off Jonathon Jennings late in first quarter. Nichols marched the team down the field and on the first play of the second quarter Harris took a direct snap and scored on a 4-yard run to make it 14-3. A pair of 1-yard touchdown runs by Streveler in the second quarter put the Bombers up 28-3. B.C would make a late charge and finally find the end zone when Jeremiah Johnson scored from two yards out to cut the lead to 28-10 at the half. The Lions had no answer to Winnipeg’s running game in the first half as Harris feasted on the Lions defence, exploding for 101 yards on 11 carries after two quarters. 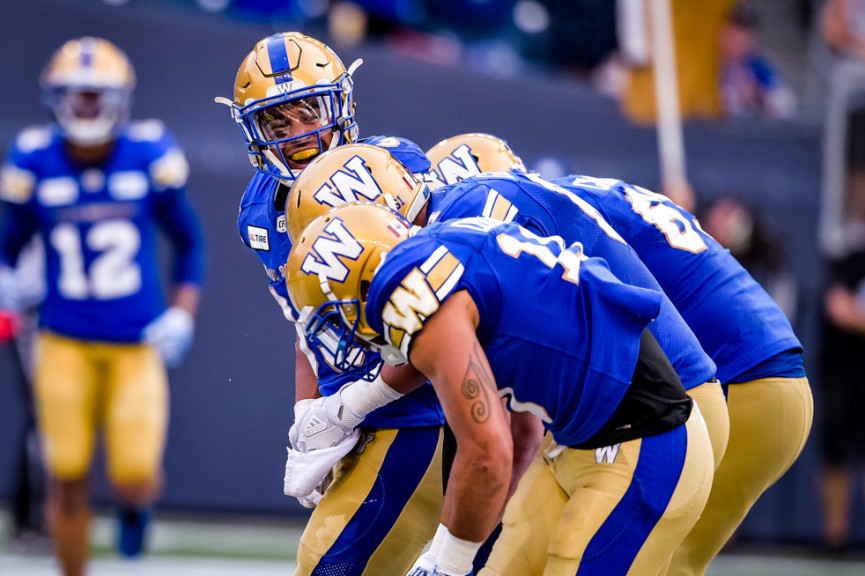 The Lions would get on the board midway through the third quarter on a 42-yard field goal from Ty Long, but that’s as close as they would come as the Bomber defence held their ground in this one, finishing the night with four sacks, three interceptions, and giving up a total of just 280 yards. Chris Randle, who tied for the team lead with five interceptions last season, picked up his first interception of the season in the fourth quarter. 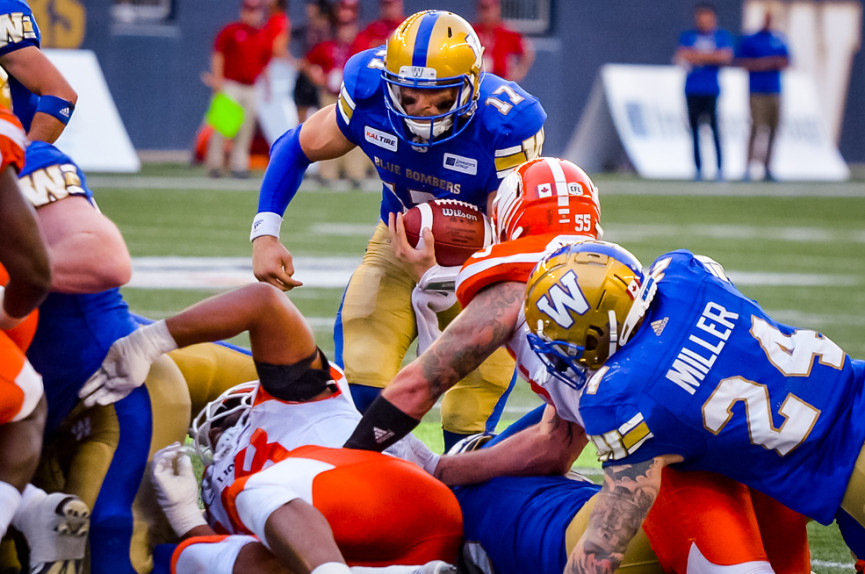 Yes, we are only in week four of the CFL season, and it wasn’t exactly a must-win, but Saturday night’s contest was a big one for the Bombers who were coming off a poor performance against the Hamilton Tiger Cats and did not want to fall to 1-3 and have to play catch-up in the very competitive West division. Winnipeg will be looking to keep the momentum going when the two clubs meet once again next Saturday night in B.C.