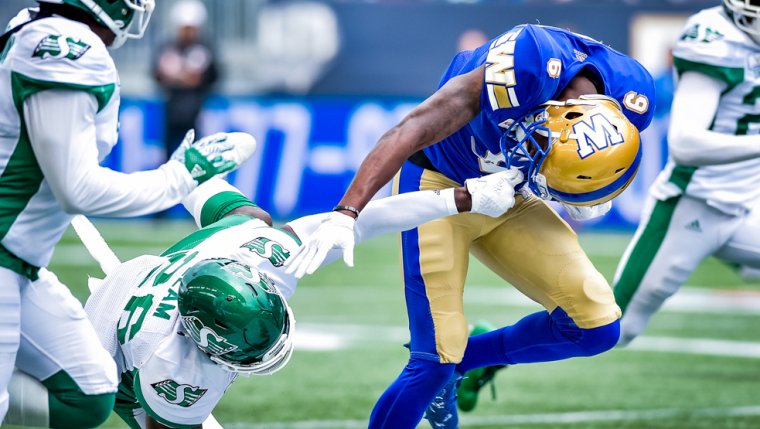 WINNIPEG - Coming into the 15th edition of Banjo Bowl weekend, Winnipeg Blue Bomber fans, players, coaches, and Matt Nichols himself knew his leash was getting shorter after three consecutive poor performances, and that leash had to be used after a disastrous first half by the Bomber starting pivot, who threw three interceptions – two of which were ran back for touchdowns – and the Saskatchewan Roughriders won their fourth straight game with a 32-27 win over Winnipeg.

It wasn’t all bad. Nichols did drive the team down into the red zone on a couple different occasions, but that’s when things would fall apart for Nichols. Already up 10-0 in the second quarter, Winnipeg had a chance to blow the game wide-open after a drive saw them move the ball to the Rider 13-yard line, but a throw by Nichols through the middle was picked off by Riders Willie Jefferson who showboated his way untouched 97 yards to the house, and the Riders were back in the game. A short time later Nichols made an ill-advised underhand throw right into the arms of Samuel Eguavoen at the Rider six-yard line, and that was run back 103 yards for a touchdown.

“Not many people know the feeling I have right now. The feeling you completely let your team down. It sucks but I’m going to keep working and try to get better”

Nichols was replaced by backup QB Chris Streveler to start the second half. A move Nichols says didn’t catch him off guard.

“It wasn’t a surprise, but obviously disappointing you know, I’m disappointed in myself, and now I just got to get back to work, that’s all you can do.”

It was actually a great start for the Bombers who jumped out to an early 10-0 lead thanks to a Justin Medlock 28-yard field goal and an Anthony Gaitor 55-yard pick-six just before the end of the first quarter.

There was a scary moment in the first quarter as Kenbrell Thompkins dropped a Matt Nichols pass and was brought down by Gainey. Thompkins head appeared to hit the turf with a lot of force, and Thompkins had to be stretchered off the field with what looked to be a neck injury. Thompkins was taken to the hospital but returned in his full gear, taking a cab back to the game from the hospital, but did not return to the field.

Winnipeg carried the momentum from their first quarter into the second, driving down to the Rider 12, but this is where the wheels would begin to fall off with the pick-six by Jefferson, cutting the lead to 10-7.

On Winnipeg’s next possession it looked as though things were going to go from bad to worse for Nichols, who threw another interception, but a roughing the passer call against Saskatchewan kept the Bomber drive alive, but the Bombers couldn’t capitalize.

Winnipeg scored their second major of the afternoon on their next possession. After a great punt by Medlock, the Bombers defence forced a two-and-out, and Nic Demski returned the punt down to the Riders 28. The offence moved the ball to the one-yard line where Chris Streveler leaped in to put the Bombers up 17-7 after the convert midway through the second quarter.

Rider Quarterback Zach Collaros threw an interception on the Riders very next play, but a pass interference call gave the ball back to Saskatchewan on the Bomber 35. That led to a 17-yard field goal, cutting the Bomber lead to 17-10 with just over four minutes left before half.

The Riders would get the ball back after Nichols’ second interception of the half and set up kicker Brett Lauther to hit his second of six field goals on the night, this one from 37 yards, and Saskatchewan was within four.

With the home crowd already reeling after the last offensive possession, things went from bad to worse for Nichols, who threw his third interception of the half with just over a minute to go, but Bomber Head Coach Mike O’Shea threw the challenge flag and the call was reversed, giving Winnipeg the ball back on the Rider seven. That excitement turned to devastation because on the very next play, Nichols would once again be picked off after being pressured, and Eguavoen ran it back 103 yards for the touchdown to give Saskatchewan their first lead of the game at 20-17. Counting the two interceptions that were reversed due to penalties, Nichols threw five picks in the first half. When the Bomber offence returned to the field, they were greeted with a chorus of boos from the home crowd.

On a positive note at half time, the Bomber defence held the Riders offence to just 116 net yards in the first half and didn’t give up a touchdown, yet the Bombers trailed 20-17.

Bomber fans got their wish in the second half when Chris Streveler came out to lead the offence, but the Rider defence greeted him the same way as they did Nichols, picking him off on Winnipeg’s second possession of the third quarter, leading to another field goal and a 26-17 lead after three.

Winnipeg needed a big play in a big way, and looked to get it when DB Jeff Hecht was left untouched and absolutely crushed Collaros who fumbled the ball. Adam Bighill recovered it to give some much-needed life to the crowd and Winnipeg started on the Saskatchewan 45. Collaros did not return to the game after the hit.

The play seemed to spark the offence, as Streveler marched the team downfield before finding Daniel Petermann in the end zone to get Winnipeg back in the game, trailing 26-24 after the Medlock convert.

A Medlock 40-yard field goal gave Winnipeg a 27-26 lead with just over seven minutes to go, but Brandon Bridge, as well as RB Tre Mason, led the Riders into Winnipeg territory, setting up Lauther from the 15-yard line to connect for his fifth field goal of the game, putting Saskatchewan ahead to stay at 29-27 with 2:48 to go.

After a pair of two-and-outs by both clubs, Winnipeg was down to 3rd and 6 with just over a minute to go and Streveler, while under pressure, threw his second interception of the half, giving Saskatchewan the ball back with 1:14 left. The Riders would add a late field goal, giving them the 32-27 win.

Winnipeg’s defence made some key stops, and gave their offence two chances in the final two minutes, stopping Saskatchewan’s offence twice, but both times Winnipeg’s offence couldn’t move the ball.

Five interceptions between Nichols (3) and Streveler (2). The Bombers lost the turnover battle 5-2. Nichols threw three picks, including two ran back for touchdowns. It wasn’t so much the interceptions, as the time they happened (with the Bombers in the red zone), and the result.

Winnipeg (5-7)enters their bye week on a four-game losing streak, currently sitting in fourth place in the West Division. The Riders are on a roll, rattling off four straight wins, and sit in second in the West.

The Bombers next home game goes September 21 when they host the Montreal Alouettes at Investor’s Group Field.