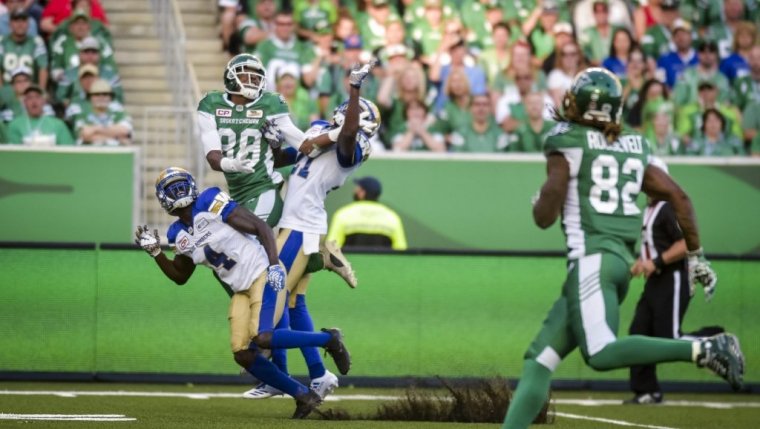 The Winnipeg Blue Bombers Jekyll and Hyde season veered it’s ugly head once again on Sunday afternoon, and the Saskatchewan Roughriders took advantage as they picked up their third win in a row with a 31-23 win in the annual Labour Day Classic in Regina.

It was an impressive and dominant first half for the Bombers, who led in all offensive categories, held the Riders to just 97 net yards of total offence, and took a 17-14 lead into the half.

Meanwhile, the CFL’s leading rusher Andrew Harris - who was held to just 13 yards last week against Calgary - went on a tear, rushing for 103 yards before the midway point of the game. Harris finished with a game-high 154 yards on 15 carries.

But the Bombers inconsistent play once again cost them in the second half, and for the fourth time this season they were unable to hold a lead they had at halftime.

Saskatchewan struck first when Matt Elam picked off Matt Nichols and ran it back 53-yards to the Winnipeg one yard line. From there backup QB Nick Marshall ran it in to pub the Riders up 7-0 just under three minutes into the opening quarter.

Justin Medlock answered for Winnipeg on their next possession, booting a 50-yard field goal, cutting the lead to 7-3.

Winnipeg would get their first major of the game early in the second quarter as Matt Nichols found Kenbrell Thompkins on a 31-yard strike, giving the Bombers their first lead of the game at 10-7.

Saskatchewan would regained the lead midway through the second quarter when Kyran Moore ran a punt return back 65 yards to put the Riders up 14-10.

After a successful quarterback sneak, Chris Streveler stayed in the game and found Darvin Adams with a 10-yard touchdown with just over two minutes to go, sending Winnipeg into the half up 17-14.

The second half seemed to be starting off exactly how Winnipeg left off in the first. After beginning a drive on their own 29, Nichols and the Bombers marched down the field until a fumble from Kienan LaFrance was recovered by the Riders on the Saskatchewan 31, ending the drive. The Rider marched down the field themselves, kicking a field goal to make it 17-17.

Medlock kicked a 42-yard field goal late in the third quarter to once again give Winnipeg the lead at 20-17.

But for Bomber fans, just as so many Labour Day Classics before, the lead never once felt comfortable, and Zach Collaros found Marcus Thigpen in the end zone just over a minute into the final quarter to put the Riders up 24-20. Collaros completed 18 of 30 passes for 250 yards on the night, with a touchdown and an interception.

Medlock got Winnipeg within one after connecting on a 40-yard field goal with just over seven minutes to go, but a Saskatchewan scored a late touchdown to seal the win.

Andrew Harris was once again the best player for the Bombers, finishing with 158 yards rushing and adding another 15 through the air.

Justin Medlock hit 3-of-4 field goals, including a 50-yarder.

The Bomber defence allowed the Riders only 97 net-yards in the first half.

For the fourth time this season the Bombers were unable to hold a lead they had at the half.

Turnovers once again were costly for the Bombers, as a blocked field goal and a fumble led to points being kept off the board and points being scored by the Riders.

The Bomber defence was better than they’ve been in the previous two games, but once again were unable to come up with a big play when it was needed most, allowing a late touchdown by the Riders.

Nichols finished the night 14-for-26 passing, with a touchdown and two interceptions and threw for just 67 yards in the second half.

Winnipeg won’t have to wait long for redemption as the two teams will meet next Saturday for the Banjo Bowl at Investors Group Field. Kickoff is set for 3:00 pm.