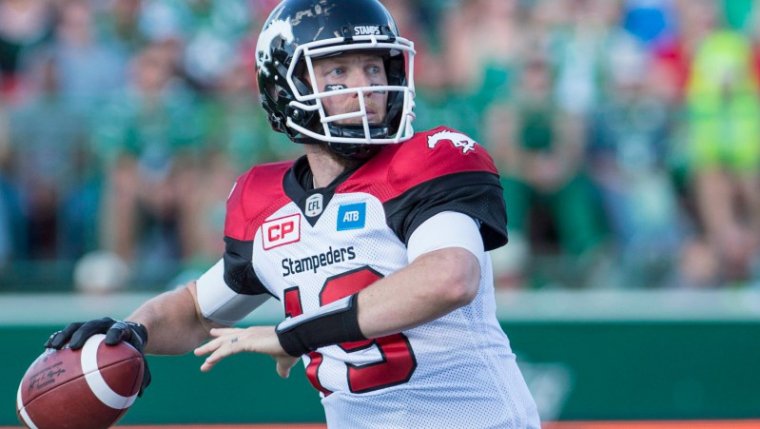 The Calgary Stampeder pivot threw for a career-high 452 yards as the Stampeders rolled over the Bombers 39-26 in Calgary on Saturday afternoon. Mitchell went 25-of-42 along with three touchdowns and improved to 8-1 in his career against Winnipeg.

The game actually began well for Winnipeg (5-5), who once again pulled out some trickery to open the scoring. On third-and-short, Chris Streveler came in and instead of a quarterback sneak, he found Ryan Lankford streaking across the field who ran it 65 yards to the house to give Winnipeg a 7-0 lead.

The Bombers took a 15-12 lead into halftime against the CFL-leading Stampeders, but it slowly started to fall apart in the next 30 minutes.

Late in the third quarter Mitchell and Jorden connected on a 52-yard bomb that set up a 25-yard touchdown toss to Marken Michel and Calgary (8-1) took the lead to stay at 19-15.

A 24-yard field-goal from Rene Paredes put the Stamps up by a converted touchdown.

Winnipeg was still within reach midway through the fourth quarter trailing 25-15, and a huge defensive stop by the Bombers with the Stampeders going for it on third down gave Winnipeg great field position at midfield, but the Bombers had to settle for a field goal after a costly procedure penalty on third and one while in the red zone put a halt to the drive.

With Winnipeg needing another stop from the defence, it was not meant to be as Mitchell once again found Jorden who made a cut inside after the catch which seemed to fool the three Bomber players that were in the vicinity, and ran it 68 yards for the touchdown.

Matt Nichols would hit Darvin Adams with a touchdown in the dying seconds of the game, but it was too little too late as Winnipeg lost their second consecutive game. Nichols finished the night 29-of-44 for 258 yard, a touchdown and two interceptions.

The CFL’s leading rusher Andrew Harris was kept in check all game, rushing for a season-low 13 yards on just seven carries. Drew Wolitarsky was the Bombers leading receiver, pulling in eight receptions for 90 yards.

The loss by Winnipeg and a win by Saskatchewan on Saturday moves the Bombers into fourth place behind the Roughriders (5-4) in the Western Conference. The two clubs go head-to-head twice in the next two weeks in a pivotal stretch of the season beginning with the Labour Day Classic next Sunday followed by the Banjo Bowl at IGF the following week.