The Good, The Bad, The Ugly - Lions Devourer Bombers 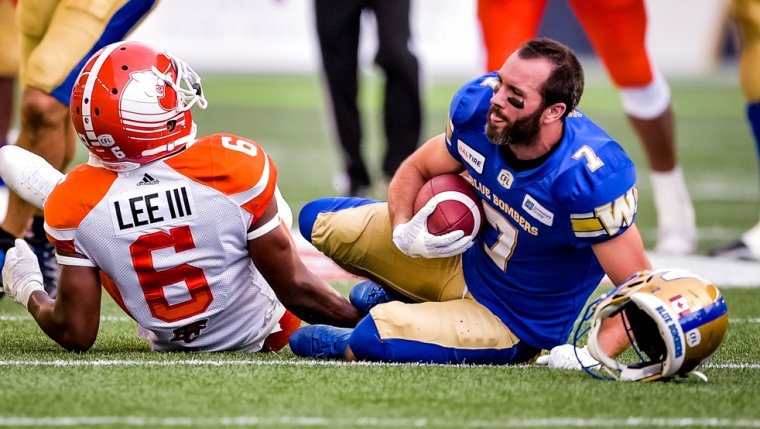 WINNIPEG - The good, the bad, and the ugly, were all components of the Winnipeg Blue Bomber performance against the B.C Lions Saturday night, and sadly they were in that order as the Lions stormed back from 17 points down to stun the Bombers with a 20-17 win.

Lions quarterback Travis Lulay, making his first start in almost a full calendar year after suffering a knee injury last season, shook off a rusty start to finish 28-of-41 for 326 yards and a touchdown.

The first half of the game was all Bombers. It took all of five plays for Winnipeg to find the end zone, with Andrew Harris showing his speed against his former club with a 37-yard touchdown run.

It looked as though Lulay was going to lead his team to the end zone on the very next possession, but misfired on a pass to Bryan Burnham and was picked off by Kevin Fogg, keeping the score 7-0 after the first quarter.

Harris picked up his second touchdown of the game in the second quarter with a four-yard dash to put Winnipeg up 14-0. On the ensuing kickoff, Mike O’Shea called for an onside kick that surprised the Lions, and the Bombers recovered the ball. They’d have to settle for a 50-yard field goal from Justin Medlock as the drive stalled, but it put the Bombers in control at 17-0.

B.C had a chance to get on the board as the first half came to a close, but Burnham was unable to hang onto the ball in the end zone after Fogg got his hand on the ball to knock it loose, keeping the Lions with a goose egg on the scoreboard after two quarters.

Then it all fell apart.

Undisciplined penalties, untimely drops, and poor decisions were the story of the second half for Winnipeg who found every way they could to lose the game.

They got away from their running game which was dominant in the first two quarters. Three roughing the passer penalties not only tacked on another 45 yards, but more importantly for B.C, kept their drives alive. Twice the Bombers went for it on third downs while in field goal range, and twice they were stopped, leaving six points on the table and giving the Lions some much-needed momentum.

After a goal line stop the momentum started to change and the Lions began to claw their way back. Quarterback Cody Fajardo capped off a B.C drive which started at their own 12-yard line to score on a quarterback sneak in the third quarter to finally put the Lions on the board. A Ty Long field goal in the fourth quarter would get B.C within a touchdown of tying the game.

The Bombers were once again third-and-goal, and Chris Streveler, who came in for the short yardage, was stopped once again, halting the Bomber drive and giving B.C the ball back. In the closing minutes of the fourth quarter Lulay found Shaq Johnson who eluded a tackle and dove in a 13-yard touchdown to tie the game. The Bombers had a great opportunity to regain the lead after a great kickoff return from Tylor Henry was aided by a 15 yard penalty from B.C, putting the Bombers within a first down of being in Medlock field goal range. But Nichols was sacked for a 8-yard loss on first down, and on the next play Nichols threw his third interception of the game, giving the ball back to the Lions with 1:11 to go. Lulay connected with Burnham on a 38-yard bomb that put B.C on the Bomber 10. They then killed the clock until Long came out and kicked 16-yard field goal with no time left to give B.C the come-from-behind win.

Andrew Harris was great once again for Winnipeg, finishing the night with 139 yards rushing and two touchdowns, while adding another 29 through the air and Nic Demski had four rushes for 35 yards in addition to his 32 yards receiving.

Matt Nichols threw three interceptions and was 17-for-28 for 214 yards and no touchdowns.

Winnipeg had five turnovers in the game, three interceptions and two turnovers on downs.

The Bombers had nine penalties, with many of them keeping drives alive for the Lions.

The Lions improve to 2-2 on the season while Winnipeg falls to 2-3. The Bombers are back in action next Saturday when they travel to Toronto to face the Argonauts.