The Best Player in Canadian Football 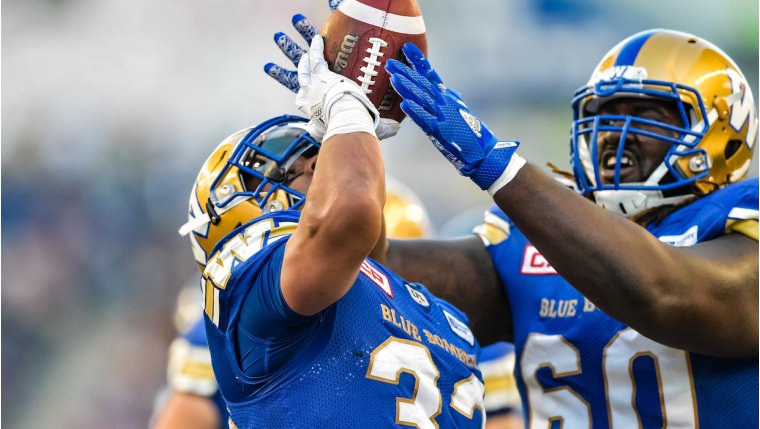 Winnipeg Blue Bombers 31-year-old runningback, Andrew Harris, is the best football player in Canada. I won’t even argue the point. Say anything you like, but nobody in the game does all the things Harris does as well as Harris does them.

He is clearly the best runningback in the game. That stands without argument. He is probably the best pass catcher among runningbacks and might be one of the Top 5 pass catchers, period. He is also an excellent blocker, likely the best blocker among CFL runningbacks today. He’s fearless and in most cases, tougher than the people who want to tackle him.

On Friday night at Investors Group Field, Harris led the Bombers in rushing, carrying 16 times for 82 yards and a touchdown. He also led the Bombers I receiving, catching four passes for 46 yards. Of that 46 yards, 41 came after he caught the football. The Bombers had a total of 270 yards of offense in a 29-23 win over Hamilton and Andrew Harris had 128 of them. Whenever the Bombers needed a first down, especially late in the game, QB Matt Nichols gave the ball to Harris.

And while the Bombers’ Nic Demski, another Winnipegger, might have had his best game as a pro with four yards rushing, 45 yards receiving, a touchdown and 134 yards on four kickoff returns, Harris had a ho-hum game (for him) and was the best player on the field – again.

Oh, and did we say that he also blocks.

Andrew Harris is a football player. The consummate football player. Although, he almost wasn’t. As a kid, and as the proud son of a wonderful single mom, Harris was a heck of a hockey player.

“I always wanted to be a hockey player when I was young,” he told me a few years ago. “When I was young, my heroes were Steve Yzerman and Paul Kariya. I loved the game and I still do today.”

He must. In the off-season, Harris still plays hockey three times a week with his buddies in the Adult Safe Hockey League at Canlan.

So why didn’t he pursue the game? Even though teams in the Manitoba Junior Hockey League and the Western Hockey League had shown interest in the game, the cost of playing just became too prohibitive for Andrew and his mom.

“The fees, the equipment, the travel expenses, it was all too much for my mom and I and I sometimes wonder how families can afford it today,” Harris said candidly. “I played at a time when Composite sticks were just coming out. I played with a wooden stick because composites were $100 at the time and that was just too much because I would go through a stick a week. When I looked around, I figured out that I was the only kid on the team with a wooden stick.

“I used to wear this old bubblehead helmet, something from the 80s, and I used to get teased about it, but I took it. That was just part of growing up. Still, it just got too expensive for us. I still think about what might have happened if I’d stuck with it. Some of the kids I played with got to the AHL and NHL. But I don’t have any regrets. I found football and I love the game.”

Considering what Harris has done in his three seasons in Winnipeg and in his remarkable eight-year career in the CFL, you can bet that Blue Bomber fans are quite pleased that he found football, found the programs at Grant Park High School and Oak Park High School and went out to B.C. to hone his craft.

If the Winnipeg Blue Bombers win the Grey Cup, and there is no reason to believe they can’t, then they’ll do it because Andrew Harris carried the football. Good thing hockey got way too expensive.