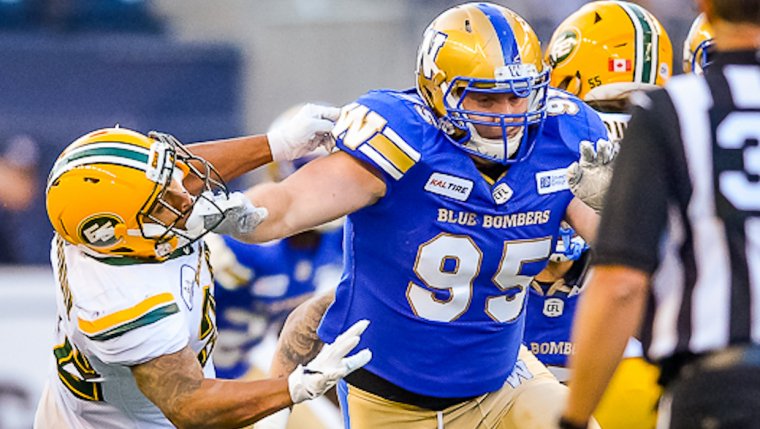 WINNIPEG - It may not have counted in the standings, but the Winnipeg Blue Bombers picked up their first win of 2018 in impressive fashion on Friday night, dropping the Edmonton Eskimos 33-13 at Investor’s Group Field.

The Bombers, who began the game with a veteran-laden lineup, faced an Eskimos squad that was missing a good portion of their starters. Winnipeg fell behind early, but bounced back in a big way to win the game which was never really in doubt after the first couple minutes.

Coming into the season there were a lot of questions marks about the Bombers roster, but none were bigger than wondering who will be behind Matt Nichols on the depth chart when the season gets underway. On Friday night, rookie Chris Streveler made a giant statement on why it should be him.

The 23-year-old went a perfect 10-for-10, throwing for 140 yards, including an 80-yard bomb to Myles White, while adding another 37 yards on the ground in his first-ever CFL game.

“The receivers did such a great job getting up field and getting yards,” said Streveler. “The O’line was giving me so much time I mean, you don’t go 10-for-10 if you don’t have time to throw back there, and the running game setting up second and shorts for us, so really it was an all-around team effort.”

Rookie running back Johnny Augustine was also impressive in his Bomber debut. The 5’9, 202-pounder had nine carries for 81 yards and a touchdown. The 24-year-old has bounced around a few different CFL teams, but is ready to prove he can play at this level.

“Last year at the combine I said to people I know I can play at this level, and today I hope I showed people that, and I’m going to continue to show that,” says Augustine. “That’s not just running the ball, but personally, I made a tackle on special teams today and I’m more excited about that than rushing the ball.”

The first two minutes of the game did not go in favor of the Bombers. Quarterback Matt Nichols gave the Bomber faithful a scare when he went off the field favoring his arm after taking a hard hit on the very first play from scrimmage. Alex Ross came in and ran for eight yards on his first carry as a Bomber, but on the ensuing punt, Jordan Robinson returned the kick 98 yards to give Edmonton an early lead.

The groans from the over 23,000 who were in attendance quickly turned into cheers as Nichols hit Bowman with a 15-yard strike in his first game back with the Bombers to tie the game. After that it was all Bombers the rest of the way.

What we learned Friday night.

Adarius Bowman and Matt Nichols have chemistry. The former teammates, who played together in the Eskimos organization, looked very comfortable together, connecting on a touchdown, and almost collected a second one but the play was ruled incomplete just a few yards away from the Eskimo endzone.

Chris Streveler has speed and accuracy. The rookie, who saw his first-ever CFL action on Friday, went a perfect 10-for-10, throwing for 140 yards. What was equally as impressive was the speed he showed when running the ball, rushing four times for 37 yards. The only blemish on the night was a fumble in the fourth quarter after an impressive run through the middle of the field.

Discipline will be key again. Last season the Bombers led the CFL with just 108 penalties against. That’s an average of six per game. On Friday night, the Bombers took six penalties.

The Bombers defense had an interception, a forced fumble, four pass knockdowns, and three sacks, while giving up a total of just 165 net yards. Last season the Bombers averaged the second most yards per game against at 396.6.

Receiver Nic Demski had three catches for 28 yards in his Bomber debut.

Running back Andrew Harris had one carry for 10 yards.

Overall, it was a solid start for the Bombers who will look to build on the win when they travel to B.C to face the Lions in their final preseason test next Friday before the regular season gets underway June 14th against the Edmonton Eskimos at Investors Group Field.